The effort to bring back a bicycling event to Cold Spring, spearheaded by Putnam County Tourism Director Libby Pataki, underscores the many issues involved in the question of tourism’s possibilities and problems. Philipstown.info asked several people to comment on tourism from a variety of perspectives. Centered on Cold Spring, where most of the town’s tourism activity takes place, this is the first part of the report.

Endowed with a large share of natural beauty, Cold Spring offers a wide range of options and activities for visitors. People come for the arts and culture, the history and the outdoor activities. The most immediate attractions are the shops and galleries on Main Street — and foremost among these have been the antiques stores. For years, visitors have been drawn to Cold Spring for the antiques.

Since the late 1990s, a billboard stood on Route 9, advertising the village’s “25 Antiques Shops.” The sign was knocked down during Hurricane Sandy, which was perhaps appropriate, since Cold Spring no longer offers anywhere near that number — the most optimistic estimate is 14 — and many locals have commented that the inventory at the remaining shops doesn’t reflect the quality of past years. 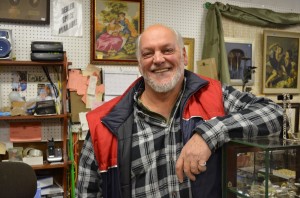 Eventually, he explained, the collections passed to their children, who have shown little or no desire to maintain or grow them. And for those who choose to furnish their homes with period furniture, the ready availability of well-made, reasonably priced reproductions has wreaked havoc on the sale of fine antique pieces.

The advent of eBay in the late ’90s, combined with the monumental role computers now play in our daily lives, has all but eliminated the need to leave the house to shop for antiques. As a result, the stores and antique fairs have taken a major hit. For years, Cooke was the moving force behind the Cold Spring Antiques Show, a highly touted outdoor event that drew dealers, pickers and collectors alike. Increasingly, the ranks of both buyers and sellers thinned, to the point where the show is no longer viable.

Leonora Burton came to Cold Spring from her native Wales 28 years ago and has owned and operated the Country Goose ever since. She agreed with Cooke’s analysis, adding, “People today don’t seem interested in anything that isn’t readily disposable.” 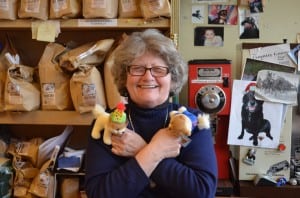 Leonora Burton of the Country Goose (Photo by J. Tao)

She wistfully recalled the Cold Spring Galleries, which conducted twice-monthly Monday auctions at the foot of Main Street. “Previews were on Sunday, and they would draw people by the hundreds. Main Street filled up, and I could pay my bills for a month just from the business I did on preview day.” When the auction gallery moved to Beacon in 1992, the revenue went with it.

The antiques shops are not alone in seeing a challenge to their business. “In the beginning,” Burton recalled, “we mainly sold kitchenware and specialized in gift baskets. Then Wal-Mart opened up, undercutting my prices; ever since, my business has focused mainly on the gift baskets. We’re holding our own, but our customers now are mainly over 40. People still come to shop, but not like before. Younger people will come in, see something they like, take a picture of it with their iPhone and order it online for less money. Recently, I threw a man out of my store for trying to photograph a postcard of Bannerman’s Island, rather than pay the 65 cents!”

Burton said that a number of high-end suppliers, such as Crabtree & Evelyn, are no longer filling local orders, preferring to sell their products directly in such mega-shopping centers as Woodbury Common. In order to cope with current trends, a number of business owners, including Cooke and Burton, have gone online to enhance their trade. “We use the social media,” said Burton, “including Facebook, to get people interested.” 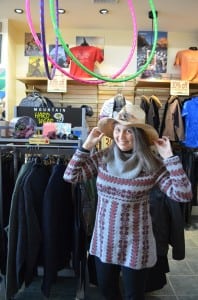 Some change is evident. Barbara Galazzo, local resident, artist and recent founder of Main Street’s Gallery 66 NY, commented, “This gallery used to be a beautiful little bookstore, until Barnes and Noble and Borders opened up. The bookstore simply couldn’t compete.” Looking ahead, she said, “It’s known that Beacon has a lot of art galleries. Now, with more than one in the village, as well as exhibitions at Boscobel and Garrison, Cold Spring can become a destination for art collectors as well.”

Cold Spring Mayor Seth Gallagher sees art galleries as “a new thing, important to the village. They appeal to both weekend and evening traffic, and are good for locals and visitors alike.” Michael Armstrong, chairman of the Special Board for a Comprehensive Plan, agreed: “The artist community is growing as more galleries open their doors.”

As Teri Barr, long-time owner of Hudson Valley Outfitters, sees it, “We’re getting as many people as always, but the amount of money they have to spend has changed dramatically.” Barr established her business on the sale of outdoor clothing and equipment to hikers and kayakers, the promotion of guided river tours, and the sale of kayaks.

According to Barr, sales have declined since 2008, which ironically was when kayaking went mainstream. “The market became flooded with kayaks, many of lesser quality — and lower prices — than those we offered.” Barr stopped selling kayaks and now focuses on retail clothing sales, boat rentals and river tours. “Rentals and tours continue strong, and we have a solid market of shoe sales to the local kids. We give personalized service, which is something the Internet can’t do. Still,” she said, “there’s less money in our pockets.”

There is no lack of suggestions by the Main Street merchants when it comes to improving the appearance and services of Cold Spring, to make it more attractive to visitors. Many feel the village is looking rundown and could use a facelift. “The village could bury its phone and electric lines and address the issue of signage,” said Barr. “People already think this is a charming spot; sprucing it up can only make it better.”

Armstrong considers the current signage “God-awful” and inadequate, and encourages their revision for the sake of both appearance and function. Cold Spring’s Comprehensive Plan lists a number of areas in need of improvement, including consistent signage, better lighting and more “user-friendly” sidewalks and crosswalks.

According to Mayor Gallagher, a number of the issues listed in the 103-page plan are currently being addressed. “Between 20 and 25 percent of the suggestions made in the Comprehensive Plan are either implemented already or in the process. We have a big project going on for Main Street,” he added, “including handicap access and sidewalk repairs. It’s a million-dollar project and should take a few years to complete.”

The project is being funded on the federal level, and the plan needs to be approved and monitored by the federal Department of Transportation. “We must remember,” said Gallagher, “that we have a 19th-century Main Street, working hard to accommodate the 21st century. And while I welcome and support visitors coming here, my job as mayor is to represent the people who live here. I don’t want Cold Spring to turn into another New Hope (referring to a heavily tourist-oriented Pennsylvania town). It’s a tricky balance.”

One issue that strikes an almost universally sour note among merchants, residents and visitors alike is the parking situation. “If the merchants park on Main Street, there’s no room for visitors’ cars. And forget tour buses; buses come here from Stonecrop and Boscobel, and there are simply no provisions for them. One bus driver recently got a parking ticket for putting his bus in the only space he could find,” said Burton.

Regina Bei, co-owner of the 180-year-old Hudson House, concurred. “Everybody agrees it’s a problem. It’s awful for people to make the trip here only to get a ticket.”

“It’s unfortunate,” added Barr, “when the first person a visitor sees is the guy who swipes his tires with white chalk.”

Professional photographer Cali Gorevic observed, “Parking has become very challenging in the 12 years since I moved to Cold Spring. It used to be just tourist weekends that were so frustrating, but now it is a constant fact of life here. Is anyone addressing this problem?”

According to Pataki, the issue is, in fact, being addressed. “A task force is being put together as we speak to look into bus routes as an alternative to car traffic, to increase service to various points of interest in Philipstown. A park-and-ride service would greatly alleviate many of the parking issues in Cold Spring.”

A few years ago, Armstrong conducted an extensive study of the parking situation in the village and reports that he counted 2,500 spaces — enough, he feels, to accommodate the village’s parking requirements. He is a strong proponent of metered parking, both as a means of “maintaining order” and as a source of revenue.

“There are plenty of available spaces,” he stated. “They are just not being managed properly. The Metro-North lot has around 227 spaces; it represents a great, untapped resource. Although the lot fills up on weekdays, it offers lots of opportunity for parking on the weekends. Also,” Armstrong added, “a second lot east of the tracks would benefit both Metro-North and the village, by adding another 100 spaces.”

Mayor Gallagher acknowledged that “there are not a lot of options regarding parking,” but he believes that space can usually be found somewhere in the village. He is, however, less sanguine on the subject of metered parking. “I’m willing to be convinced, but I personally would find it inconvenient.”