A kitchenware store’s reach extends to both sides of the fork in the road of cookery: goods for those who are passionate about it, and necessities for those for whom making dinner is a chore. So says Emily Burke, owner of Beacon’s new store Utensil. The ability to provide both needed and wanted goods for both the “Hudson Valley foodie vibe people and for residents in need of good quality basics” supports her goals for the business. 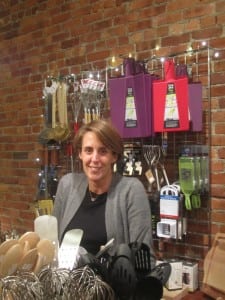 Burke has “long wanted to do this — I’ve been thinking about it for about 10 years.” After years spent working in marketing for places like Saks and Fragments jewelry, jobs she “enjoyed but wasn’t completely drawn to,” in 2001 Burke relocated to London, where her husband was working, and found a job managing a retail shop.

It was there that she realized that was what she wanted to do. Interrupted by the trajectory of returning to Lower Manhattan, having two children and moving up to Beacon about seven years ago, Burke spent that period “waiting for the right time.” With both of her children now in school, that time is now.

Drawn to Beacon initially through an interest in Hudson River towns, Burke has taken note of “the fluctuations with businesses there — some have opened and closed, but many have opened and are thriving,” and she has cast a watchful eye on commercial potential. “I’ve cultivated this idea for a long time before it became brick and mortar,” she said. “Knowing my needs as a resident and a Main Street shopper who loves to cook, I see the practicality behind it. In a kitchenware shop, you can always find something — for $5 or $500, there’s something here you can use.”

“Main Street is fabulous,” she said, “and I want to provide something that’s a need, not just a want. With this store, we can provide both. It can be a simple thing like a new dishtowel or strainer, just to brighten things up, and I also have people in aprons running in from a nearby restaurant, needing a muffin tray.” 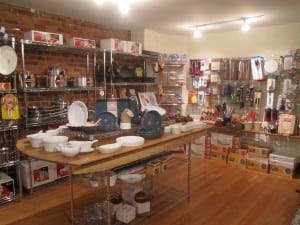 Pots, pans, baking dishes, mixing bowls, containers, gadgets and yes, utensils, fill the bi-level space to the brim with very browse-able shelves of goods. (Burke’s husband is an architect and kept a close eye on spatial proportions as the store was designed; he also made the countertops of the two long tables in the lower room.) Burke is “trying hard to keep prices affordable,” as well as keeping an eye on design, fusing the “modern and tried and true classics.”

It’s important to Burke that “things be fairly understandable. I’m not a huge fan of tools that are supposed to do a hundred things. A few really good cook’s tools will get you far,” she said.

Researching a great deal, Burke tries out most of what she sells, and she also welcomes suggestions from customers and can do special orders. Although the products are sourced from “all over,” she tries to incorporate, where possible, a lot of goods made in the U.S.

She also stocks a number of things made by local Beacon artisans, including Jessica Wickham’s cutting boards, glassware from Ten Willow Studio and ceramics from ModCraft. A knife-sharpening service has just started. In the weeks since the November opening, bestsellers have included bakeware, cast iron, Wickham’s boards and Joseph Joseph’s line of accessories. Local restaurants have also been ordering specialty items.

Beginning now with “a good representation of the basics,” eventually Burke hopes to expand into tabletop items, linens and gift registries. She has a whole basement in which to do so. For now, she is taking in her customer base and “seeing what people really like.” 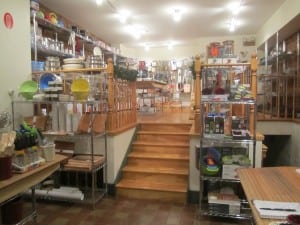 She’s also enjoying experiencing Beacon from a very new perspective. “There’s a different sense of Beacon being a shop owner rather than someone who lives here,” she explained. “There’s an incredibly supportive group of storeowners, too. On the day we opened, a nearby florist sent flowers. Beacon has a real sense of community, and Main Street is a whole other community within the Beacon community.”

Utensil is located at 480 Main St. in Beacon and can be reached at 845-202-7181. The store is open every day except Tuesdays. For more information, visit utensilkitchenware.com or the Facebook page.

One thought on “Utensil Kitchenware Mixes Modern and Classic Ingredients”