Second in the series takes place on Jan. 26 at 69 Main

The second of Philipstown.info’s A Song Is Born series takes place at 8 p.m. on Jan. 26 when Philipstown songwriters Todd Giudice and Kathleen Pemble join up for a look into lyric, melody, harmony and collaboration — tied neatly into a bundle of playing songs individually as well as together, and talking to the audience about how each song came to be. 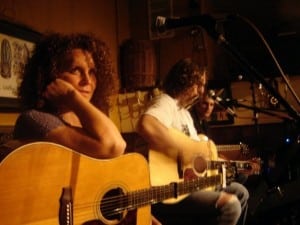 Giudice and Pemble haven’t actually sung together often, but they have collaborated on occasion and have “been running songs by each other for over a decade,” said Pemble. “We’re both really direct critics with each other — a great combination.” Pemble called Giudice, who is a guitarist, drummer, singer / songwriter and producer, “great at making suggestions about chord changes which change the meaning of the moment, sometimes from major to minor. He’s more structured, using an A-B-A form; I wander. He’s very good with nuts and bolts while I’m good with embroidery.”

Pemble described her music as “a lot of percussive guitar; the language is finely-honed and kind of fierce — fiercely sad, fiercely happy, fiercely comical. Make a big splash in the first couple of lines so the listener goes, ‘Whoa!’”

Pemble described Giudice’s music as “roots-inspired Americana. He’s a really good songwriter and an excellent harmony singer. He decided to put down the guitar and writing because he wanted to drum. He has a fantastic studio and he’s an amazing producer.”

Here’s Giudice on Pemble: “She has very inventive chord shapes, different tunings — she brings a lushness to the sound; she doesn’t use standard guitar tunings. This brings a whole new dimension to her songs. I like to sing with her; we get along vocally, with timbre especially.”

Giudice called his music “Americana, with scratchy guitars and all that,” and referenced Tom Petty as in a similar vein. He described his music as evolving: “My last record has a real acoustic singer/songwriter sensibility, but now I’m going for less controlled, a little more steppin’ out energy.” 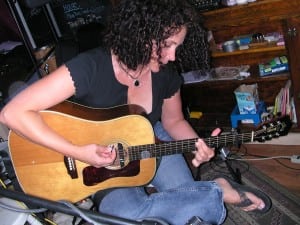 Pemble’s songs need to be peeled back like onions. Their exteriors are a fragile skin and appear literal. But take that skin off and the core is exposed. She said: “Storytelling can be veiled — sometimes the songs are about me, sometimes about someone else. Things can be really concrete in them — shockingly so — you’d never know it. I try to keep the emotional content universal so whoever is listening can tap in. Songwriters fall down when they’re only talking about themselves. I’m better at distillation; tapping into the human experience is what makes people willing to listen and can make the difference between an engaged and a disengaged audience.”

It may surprise those who have seen her perform confidently on many stages in this region over the past decade or so, but Pemble didn’t start playing in front of people until the age of 35. Growing up in Westchester, her mother was a piano teacher, and circumstances meant that during a tough stretch, their Steinway piano needed to be sold, “because she needed to feed us. So I picked up the guitar instead.”

“I still play piano,” said Pemble, “but guitar is my first instrument.” (She’s now added banjo, bass and, recently, ukulele.) Encounters with Joni Mitchell Made Easy and the Carly Simon and Fleetwood Mac counterparts developed her songwriting interest, and she began making some up on her own.

Pemble went to her first open mic at age 39, describing herself as unwilling to do so “until I was brave enough to sing in front of people as well as I could in my dining room.” Stricken with continued stage fright, her knees would shake and her voice wasn’t up to par, and she kept making mistakes initially. “I was told it was a muscle — that I should go to lots of open mics and just sing.” So, she did, and kept on doing, until she grew more comfortable onstage.

“I showed up, went to friends’ gigs and finally asked (at Danny’s Café in Ossining) for a gig. I got 10 people to play with me — a huge cluster of a band. That was the start.” Since then, Pemble has “played in some big, major places, but I’ve realized than even though you get that ‘next big room,’ there’s no ladder to climb — it’s a trap you go around.”

Pemble stated, “All I ever wanted to do was to be as good as I could be. I wasn’t hungry for anything but comfort. People sense when you’re trying to be the next big thing.”

Nowadays, Pemble combines performing with private teaching to children as young as 3 through teenagers and adults. She taught early childhood music for 20 years and still does one class each week at Philipstown Rec, where she calls herself less a music teacher than a facilitator. Her future plans include recording her third CD, at Giudice’s studio, and also working on what she calls her “swing project.” It’s “comical swing music that you can dance to: bass, drums, guitar, sax — me and two other women doing Andrews Sisters-type harmonies using ’40s tunes like ‘Rag Mop,’ children’s songs and pop songs and making them swing.”

Pemble’s earlier recordings can be found on iTunes and on Amazon — her most recent CD, with all original material, is called Learning to Listen Again and was released in 2004.

For the A Song Is Born performance, Pemble intends to choose a variety of writing styles, “different meters, keys — I want to mix it up.”

Giudice grew up as one of those always-listening-to-music kids in Newburgh. He said his first musical education came from “constantly learning what sounds right by hearing it — osmosis.” From the Beatles to the Kinks, The Who, Springsteen, blues and basically anything rock and roll, especially anything guitar-dominated. “I jammed with my high school friends and found a musical identity, though there wasn’t much of a music scene in Newburgh and there were no places to play.” 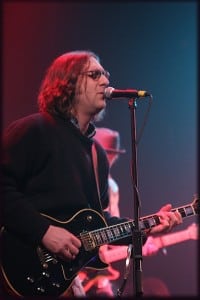 Giudice headed to Berklee College in Boston where he headed with a “passion for playing music but no idea how to make a living. I learned the road map of music theory there — it was an amazing experience. I’m putting it to use today, in my studio.”

Resisting the advent of punk, as “I like melodic music; the energy of punch was great but I like things more subtle, like the lilting melodies of Pete Townshend and The Who.” Through the late ’90s, Giudice regarded songs as mere “vehicles for playing guitars. Consequently, nobody gave a crap!” He was not certain what changed but thought it came with maturity, reflecting, “I’d done what I had to, to make ends meet, and then it became a time of using my experiences, ears, all I’ve been taught, in a different way.”

Giudice never begins with the lyrics. Instead, as he describes it, “I pick up a guitar and find a chord, then play around and see where it goes. I always start with a musical idea; never write a poem and set it to music. Sometimes complete accidents happen. I was at a gig, de-tuned the guitar for the last song I was playing, and the following day I found some writing in a box, not mine. Looking through it I saw familiar stuff written down. I looked more closely and realized it was written years before [the person who wrote it] meeting me. I pulled my guitar out of its case and didn’t expect the sound that came out. I then wrote a song from that. It’s so often happenstance: little things that pepper other things.”

In choosing songs for this concert, Giudice is still mulling his choices over: “Is it about the story or the song itself?” He has a bunch to choose from, as his third record is almost done. And it will be a record, and not a CD, as this one is coming out on vinyl.

Giudice’s experiences working with renowned sound engineer Scott Hull and being mentored by him led to his turning a lot of his energies toward production and opening up a studio, Roots Cellar Recordings, in Cold Spring. “I learned about production, working with people, while making my second record over a few years. Now production has become more what I do now.”

Giudice is fairly new to Cold Spring but visited for quite some time before settling here. He was Poughkeepsie-based for a long time, playing gigs at the Cubbyhole and working for the Poughkeepsie Live television show, among other things. Through meeting Pemble, she told him about the music scene here, and Giudice started turning up at The Listening Room events and elsewhere. “I found the music scene so rich that I felt at home. Working in Newburgh there was no scene, no camaraderie. Here I felt like I was in the right place. I’ve found an atmosphere here that helps me be more creative.”

Giudice’s recordings can be found at CDBaby.com. Visit KathleenPemble.com and ToddGiudice.com for more details and to hear tracks.

Admission to A Song Is Born is free with donations for the performers welcomed. Call 845-809-5584 to reserve seats.