Sometimes I cannot cook. For days on end, everything I make comes out wrong: The lentils are mushy, the braised cabbage too sweet, even the simple green salad is oversalted. For the past week, I’ve introduced every meal with an apology. 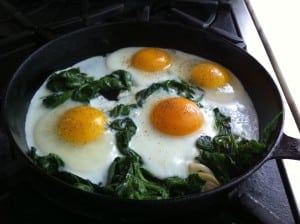 Meanwhile, my family is supposed to be on a post-holiday frugality regimen, in which we nullify December extravagances, financial and otherwise, by engaging in January asceticisms — PB&Js and walks in the woods to cancel out pork loin and ski trips, for example. So I can’t just throw my cooking disasters in the compost and order a pizza, because that would be wasteful. Instead, I grit my teeth and carry on: overcooked pasta, burnt grits. And the more I mess up, the more I stress out. And the more I stress out, the worse I cook.

Yesterday, through the fog of failure came a familiar voice from long ago. “Let go of the wheel,” it said.

The wheel in question was the steering wheel of a vintage Karmann Ghia convertible, a car already older than me on the spring morning that I opened the passenger door and climbed in. This car belonged to — nay, was adored and obsessed over by — my friend Margo’s big brother Rob, a guy we’d known previously only as an aloof figure who wanted nothing to do with us kids. 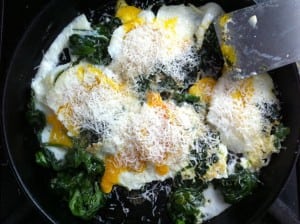 But now it was May, the school year almost over, and we had just stayed up all night, all night, in his carriage house. As the sky lightened, someone suggested we go to the Jersey shore, and, miraculously, Rob not only agreed to come along, he offered to drive … me.

At 17, I wanted nothing more than to have a life, so I said yes instead of piling into Margo’s sedan like everyone else. Halfway there, Rob pulled over onto the shoulder of the highway, announced that he was tired and asked me to drive.

I take a deep breath even now as I write this, because here’s the thing about that car: Rob had cranked the steering mechanism so absurdly tight that a touch, the merest vibration from my hand, would send it veering off towards the median, and my attempts to correct it would only make things worse, rocketing the car towards the woods. I swerved down the (mercifully empty) highway in a keen panic, Rob having immediately dozed off in the passenger seat. But whenever the oscillations would get truly out of hand, he would say, without opening his eyes, “Let go of the wheel.”

It was the hardest thing in the world to do, utterly counter-intuitive, but the moment I did, the car righted itself. By the time we arrived at the beach, I could actually drive the high-strung beast. 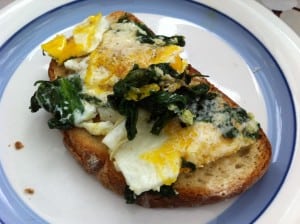 And that, friends, is the story of the actual wheel, which I recall vividly no doubt because adrenaline etched it onto my brain. These days, I’m happy to possess this memory because it reminds me how to handle life’s metaphorical wheels, which I have a habit of gripping too tightly whenever things go off course. I apply myself to some task, it goes wrong, so I try harder, and when that makes things worse, I try even harder, and so forth. It takes a while for me to remember to let go and allow things to right themselves — which they inevitably do.

I realize this has nothing to do with food, but keep in mind that it might be best for everyone’s sake if I stay away from food at the moment. With the possible exception of eggs, because the kids are getting hungry, and frying up some eggs for supper is almost like doing nothing at all, only better for you. Especially since there is a bag of spinach in the fridge, and a nice rind of parmesan to grate over top, and toast to pile it on top of. It is a combination that tastes surprisingly, deliciously perfect, the way that things do when you finally let go.

At suppertime, I often leave the garlic in the oil, but for breakfast, it’s nice to take it out after it has warmed just a few minutes so that the flavor isn’t overwhelming.

One thought on “Mouths to Feed: Egging Myself On”