Cold Spring village officials Friday, Jan. 18, saluted all those, paid and unpaid, who keep the wheels of local government running, whether in major departments or on the advisory boards that handle many nitty-gritty municipal chores. 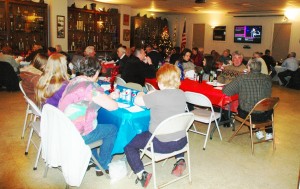 Gathered first near the fire trucks — and beverages — and then around tables for dinner, attendees caught up with friends and local gossip, celebrated grassroots-level civil and volunteer service, and partook of a buffet supper, coordinated by Trustee Bruce Campbell.

Mayor Seth Gallagher recited a long list of people and groups to thank, from the often-unheralded, such as garden club members — “we really appreciate what they do to make the village look good” — to members of the Water and Wastewater and Highway Departments; school crossing guards; police and firefighters; Tot Park parents; election day polling aides; Planning, Historic District Review, and Comprehensive Plan-Local Waterfront Revitalization boards; Zoning Board of Appeals and Recreation Commission members; individuals who donate electrician or roofing assistance or funds; and others, including Trustees Charles Hustis, Matt Francisco and Ralph Falloon, Gallagher’s colleagues on the Village Board, and the other elected officials present.

“As you can see, there are a ton of people who help out the village,” Gallagher said. “You can’t do it with just a few.”

Gallagher has announced that he will not seek re-election this March, and he used the party for a short farewell. “It’s been a pleasure and honor to serve as mayor the last four years. Thank you very much” for the opportunity, he said.

After Gallagher finished, none of the other elected officials delivered remarks, except for Campbell, who had a brief announcement: “We have lots of dessert waiting!”