Parents also concerned whether to announce lockdown drills or not

The Garrison School Board of Education was host Wednesday night (Jan. 23) to Haldane Superintendent Mark Villanti, High School Principal Brian Alm, and two of their star seniors, Lindy Labriola and Simon Close, also Garrison School alumni. The visit occurs every year to present an annual report to the board, as a receiving high school for Garrison’s eighth-graders. 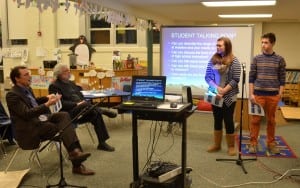 Because Garrison School does not have its own high school, graduates of the middle school continuing in the public school system choose between Haldane in Cold Spring and James O’Neill High School across the river in Highland Falls. There will be more opportunities for Garrison’s eighth-graders and their families to find out about the two high schools on visits, and O’Neill High School will also make a presentation to the Garrison School Board at an upcoming meeting.

A few parents attended the meeting Wednesday expressly to hear about Haldane. Villanti and Alm began with a PowerPoint presentation highlighting statistics such as the SAT profile, state assessment results, and status as silver medalist according to U.S. News & World Report.

Alm pointed out that Haldane has had success giving their high school students a head start in college, because seniors take a social studies elective affiliated with Dutchess Community College and because they encourage most of their students to take Advanced Placement (AP) courses, which can provide students with college credits if they pass AP exams. Alm mentioned that studies show students who took AP courses, whether they passed the exams or not, tend to perform much better in college than those who didn’t attempt any AP courses.

He said, “Our hope is that every student who goes through Haldane will at least attempt one AP. If you raise expectations for all students, students meet those expectations.” In the past five years, their AP participation rate has more than tripled, with more students taking AP courses and achievement rates remaining steady. 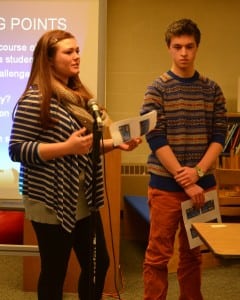 Haldane seniors and Garrison School alumni Lindy Labriola and Simon Close talk to the Garrison School Board about their experiences at Haldane on Jan. 23. Photo by J. Tao

Labriola and Close answered questions posed by Villanti and Alm as well as by board members. Labriola has taken nine out of the available 11 AP courses offered at Haldane will attend Amherst next year. Close is taking six AP courses and is “tired all the time,” being heavily involved in drama and other activities, but he said he wanted “to be challenged in that way.” He has applied to many Ivy League schools.

Asked by Trustee Jim Cannon about the challenges, especially concerning state mandates, that the high school faces, Alm said that their answer lies in common planning time for teachers and creative scheduling.

“I think that’s what’s going to keep us all alive in this age of outside-imposed, unfunded mandates,” Alm said. “We have to preserve the opportunity for teachers to be professional, to work together and share their craft and troubleshoot together, and model the type of learning that we want our students to have in class.”

Garrison Superintendent Gloria Colucci said that the administration is still working on the 2013-14 budget, but there are still many unknowns, including numbers for kindergarten registration (which occurs Feb. 5-6) and the costs of implementing the new teacher and principal evaluations (APPR). Colucci’s goal is to remain within the 2 percent tax cap, but she pointed out recent disappointing news from Gov. Andrew Cuomo’s proposed budget, which reduces Garrison’s state aid by almost 10 percent compared to last year (a reduction of $56,000).

Board Member James Cannon asked whether there could be any changes to the governor’s budget. Colucci replied that the state has had to shift aid from districts with higher wealth ratios to more needy districts, so there may be some resistance from Long Island and Westchester districts, but in her experience, the governor’s proposed budget “typically prevails.”

Board Member Charlotte Rowe asked Colucci about a recent safety meeting held with the PTA, which had sparked discussion among parents over the weekend. Rowe asked about the results of a recent security audit by the sheriff’s office.

Colucci said the sheriff’s deputy was impressed by Garrison, which is locked during the school day and only opened to visitors after verifying their identity. There are panic buttons in the school, which were recently tested by accident when a child pushed one, causing police to respond within two to three minutes.

Much of the technology was installed seven to eight years ago, however, so some systems may need upgrading. This could include installing a camera with an upgraded buzzer system, key cards, and a new PA system, which would have to be approved first by the board.

Rowe acknowledged that these steps might be necessary, but she pointed out that the shooter in Newtown, Conn., did not try to buzz into the school but simply shot his way in, so he was only deterred a few seconds. Many parents, she added, want multiple, unannounced lockdown drills, even though they are not required.

Colucci elaborated that the school typically conducts larger drills (lockdown, shelter-in-place, evacuation or high-wind) at least twice a year. An evacuation drill occurs every October in coordination with the county, where all schools practice sending students home early. The school will conduct a lockdown drill soon, but it will practice first with only faculty, so that they can troubleshoot before the full drill.

Another concern parents have expressed, Colucci said, is that they do not want their children to be upset or frightened by these drills. She said having calm discussions in class would help, giving the example of a teacher who read aloud a book about a fish who needed to find a safe place.

Gerard McCarthy, the only parent in attendance by the end of the meeting, asked whether there was a reason the school does not notify parents before a drill. Colucci explained that the principal does send a letter home before and after large drills — namely the evacuation and lockdown drills.

When asked by the board why he wants parents to be notified of the drills, McCarthy answered, “So they can decide whether they want their kids to participate or not. Or if they want to prepare them.”

Colucci said, “The drills are actually required by the state Education Department. We are required to do the drills, and there is also a protocol to follow in doing the drills, and part of that protocol has always been that a letter go out announcing the drill. I don’t know if that will change going forward.”

Board Member Theresa Orlandi asked whether they were allowed, then, to do surprise drills, and Colucci replied that they can.

Cannon said he was concerned that students who opt out of the announced drills would be less prepared than others in the event of an emergency. This is why, he added, families are encouraged to practice what to do in case of a fire at home.

McCarthy clarified that while the advantages and disadvantages of doing the drills are “debatable,” he was making the point that parents should be informed on when the drills will take place.

School Board President Raymond O’Rourke thanked the community and parents for their input through the process of revising the board’s long-term goals. In response to parents’ request in the goals for better communication from the school, Principal Stephanie Impellittiere announced the publication of The Garrison Connection, a newsletter put together by parent Emily Lansbury and Technology Specialist Nancy Romano. It can be viewed on the school’s website, gufs.org.