The Nelsonville Village Board held its first meeting of the year on a chilly Tuesday night (Jan. 22), rescheduled due to the Martin Luther King Jr. holiday on Monday. Matters discussed included a follow-up to the request for three crosswalks on Route 301, notice of Cold Spring’s hearing on zoning changes, the upcoming Nelsonville election, and delinquent tax payments. 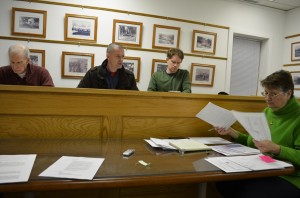 At their last meeting on Dec. 17, the board passed a resolution calling on the New York State Department of Transportation (DOT) to install crosswalks on Route 301 at Fishkill Road, Billy’s Way, and Peekskill Road, citing the board’s concerns for the safety of pedestrians. Currently, there is only one crosswalk in the village at Pearl Street, which is a mile away from where Route 301 becomes Nelsonville’s Main Street.

Previous attempts to establish other crosswalks have been denied by the DOT, stating that the areas did not meet their specifications and drawing criticism from Mayor Tom Corless at last month’s meeting.

The village office has since received correspondence from the DOT that they received the crosswalk request and that “a formal investigation has been initiated and a study will be conducted.” Corless remarked with sarcasm, “I’m sure that will be cost-effective.”

On the notice from the Village of Cold Spring for its Jan. 29 public hearing on zoning changes, the board was unclear whether the changes were for the Butterfield Hospital property or for the Dunkin’ Donuts menu board. Village Clerk Pauline Minners read from the notice that copies of the local law are available at the Cold Spring Village Office for reference.

The board passed a resolution setting Saturday, March 9, noon – 5 p.m., as the voter registration date for the village election, which is scheduled for Tuesday, March 19, noon – 9 p.m., with both the registration and election at the village office, 258 Main St. (through the Pearl Street entrance). Marlene Bowman, Greta Graham and Judy Meyer were appointed election inspectors.

As of Jan. 22, the village had not received any petitions to run for the mayoral seat or for the trustee position held by Ande Merante, whose current terms expire in March. Corless and Merante are, therefore, presently running unopposed for re-election. Petitions to run in the village elections are due to the Village Office by Tuesday, Feb. 5.

This year, there are nine properties in Nelsonville still owing taxes — an increase since last year, said Minners. The village will submit the delinquent taxes of $8,769.09 to the county, which will pay the village along with the penalty of $964.65 for a total of $9,733.74.

Merante said that there have been many houses, just in his block, that have changed hands this past year. Minners said some people selling their properties often do not pay the taxes, hoping that the new owners will pay them once they’ve sold. “It’s not a good idea,” she said, “with an 11 percent penalty.”