What makes people who have the ability to choose determine whether any particular location is the right one for them? Once they’ve moved in, what satisfies them and contributes to the putting down of roots? What factors help those who have lived in a place for generations feel that it belongs to them but should be open to others as well? All of these questions are part of the petri dish of tangibles and intangibles that contribute to shaping geographic centers. And with populations shifting steadily to urban areas, even small cities like Beacon are doing self-examination and figuring out their identities. 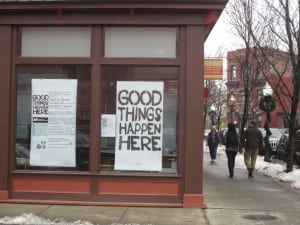 Exterior of School of Jellyfish on workshop day
Photo by A. Rooney

It is with all of this as a backdrop that Beacon’s School of Jellyfish (SOJ) — an interdisciplinary design center that aims to use its role as a community forum to generate sustainability and alternative-energy consulting ideas for entities large and small, public and private — is holding a series of workshops. Entitled Good Things Happen Here, the workshops focus on ideas for making Beacon a “successful city, a place to which people feel they belong,” according to SOJ founders Oliver Schaper and Lily Zand.

Zand, an architect and professor, said learning to look at the details and the whole at the same time is integral to the discipline of architecture. Zand, a Cooper Union graduate in architecture with a master’s in design studies from the Harvard School of Design, is a fervent believer in giving more than you take and in the importance of looking at the world and understanding that everything and everybody are parts of a collective system, humans dependent on ants, and so on.

After spending what is now four years in Beacon with SOJ, Zand and Schaper, her husband, an architect who has worked extensively in urban design and with master planning strategies relating to sustainability, are starting to ask questions of the community, the answers to which they hope will shape the city’s development.

Anchored to the coming centennial celebration in Beacon, Schaper and Zand encouraged attendees at their recent workshop to both look back 100 years and look forward 100 years, giving consideration to what has benefited the area and what hasn’t in formulating a plan for the future. The object is to avoid disposable architecture and growth and to avoid a misplaced nostalgia for things in the past as well. 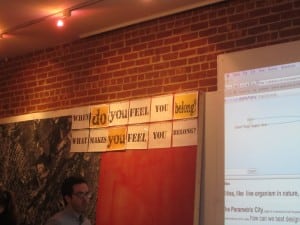 A feeling of belonging was seen as the ultimate goal. Photo by A. Rooney

Schaper noted, “If we continue to put up buildings which look like they were built a hundred years ago, a hundred years from now there’ll be no record of this time.” Schaper urged a long-term vision: “Build stuff that is valid — that will still matter 100 years from now. Even if the thing itself doesn’t survive, the idea does. Because we have become so stingy with resources — as we should be — things feel limitless, but actually are limited; understand the limits of the body within an unlimited space.”

In speaking of urban expansion, Schaper said, “When it makes sense, a unified vision opens a city up for growth and it’s not a negative.” He explained, “The idea is to promote the city as a live organism, which acts as one.”

This workshop, which focused on public spaces, followed an introductory presentation a few months ago at the Beacon Institute and will be continued with other workshops — the next investigating Transportation as a Public Space — in the months to come.

The workshop opened with a viewing of a film that highlighted the description, by a number of astronauts, of the first time they looked at earth from space. Each described what is known as “the overview effect,” in which there is a kind of ecstatic realization that the individual self is a manifestation of the whole earth. With this as backdrop, Zand and Schaper asked the attendees to consider, “What is a public space of our time?”

Thinking first of the city as a whole, under the name “Parametric Cities,” Schaper said: “When you think of a city as a fabric, everything connects. Study public spaces; they are a catalyst where cultural innovation happens. The idea is look at it again and see what sense of belonging occurs, when and how. A sense of belonging comes third (after physiological need and a feeling of safety) in importance. What does belonging offer? It is critical that everyone feels contributory, valued, part of a system.”

In relation to sustainable development, Schaper felt that changes were afoot. “Big corporations now see it as a matter of survival to look where their raw materials come from. We as people can demand it. The consciousness of living green becomes not a matter of decision-making; it just is.”

In discussing point 4, he said that “every master plan which has succeeded has done so because of number 4; those that fail don’t include it.”

Zand called the notion of “How can I change the world?” too daunting, and, as part of this gathering, she detailed a sort of communal think-tank effort, under the guise of a “competition” for “10 nanoscale, cheap, quick interventions for Beacon” — not just on Main Street, but everywhere, as “the city as organism has to grow all over.”

With this type of small-scale 10-pack generated by the community, Zand sees a real potential for funding: “If it’s nano and affordable it can happen. If we can get 10 percent of the total population onto Main Street, it creates another dynamic, because people go where other people are — it’s a ripple effect, and then these turn into bigger ideas. Sometimes it’s a ‘temporary idea’ which gets it over the threshold,” she said, citing the London Eye as an example of that process.

The small ideas should “compress the space of Beacon into events which happen here which become that next thing that guides you … must be do-able from now until the summer,” Zand said. She suggested a first one as a “live feed of Main Street on view at the Beacon Metro-North station” so that the city can benefit from the 75,000 annual visitors to Dia at that end of town. The goal is to “retain the Dia draw and siphon it up the hill.”

Responding to a comment made by a participant who mentioned a series of banners created by local artists that greet visitors near Dia and act as kind of “breadcrumbs leading them up to Main Street,” Zand said, “It doesn’t need to become Disneyland-ish to cultivate the mind of a walker.”

Reiterating the overarching need for residents to “have a city they feel part of,” Zand called belongingness “a sense of personal involvement in a social system so that persons feel themselves to be an indispensable and integral part of the system; that’s the essence of belonging.” A discussion followed about how longstanding community members might relate to any changes, and what newcomers could do to become part of the existing Beacon community.

Ideas were then solicited from participants; one suggested project was to evoke a town square anchored by a fountain by creating it in miniature — say, a ceramic pot equipped with a pump, making it a gathering place with a water feature. Encouraging others to come up with more, Zand emphasized, “The important thing is that though everything starts with a vision, it can’t be eclectic — you must know what connects and gather the information together.”

For more information on School of Jellyfish and their many activities, including future Good Things Happen Here workshops, visit schoolofjellyfish.com or their Facebook page. Also see an earlier story on SOJ from Oct. 14, 2010, on philipstown.info.