Scots and would-be Scots celebrate in the Hudson Highlands

The Hudson Highlands Pipe Band held its annual “Burns Night” fundraiser at the Highlands Country Club in Garrison on Saturday, Jan. 26, in the tradition of warming the hearts of expatriate Scots (and Scots for a day) on a cold winter night with whiskey, haggis, bagpipes and poetry, on or near the Jan. 25 birthday of legendary Scottish poet Robert Burns. 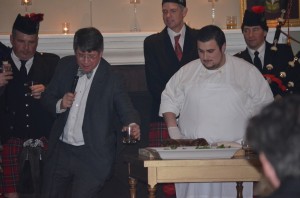 Saturday’s Burns Night followed the traditional form of Burns Nights the world over — beginning with a gathering for cocktails, followed by the welcome and Scottish soup course, the “piping” of the haggis, the supper, a speech on the “Immortal Memory” of Robert Burns, a toast to the “Lassies” and a toast to the “Laddies,” and closing with the singing of Burns’ famous poem, Auld Lang Syne, and music and dancing.

After a grand entrance of the marching pipe and drum band, Hudson Highlands Pipe Band Chairman Mark Civita welcomed the guests. Piper Mike MacNintch presented the haggis, playing the pipes while leading the cook to bring out the haggis — the Scottish national dish and what those on the British Isles call a “savory pudding” consisting of ground sheep’s heart, liver and lungs encased in sheep’s stomach.

Nick Groombridge toasted the haggis with Burns’ poem, Address to a Haggis, and band member Jared Wigdor recited the Selkirk Grace. Guests were then treated to a buffet dinner, which included the strange-sounding but nevertheless delicious haggis. 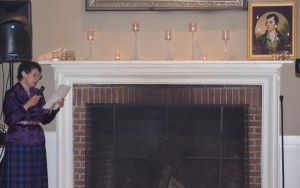 Liz Armstrong reads her ‘Ode to Robbie Burns’ during the toast to the poet, whose portrait sits on the mantel, on Burns Night, Jan. 26, at Highlands Country Club in Garrison. Photo by J. Tao

This year, Liz Schevtchuk Armstrong (local writer and a senior correspondent for The Paper) gave the traditional toast “to the Immortal Memory of Robert Burns” in the form of a poem she wrote, entitled Ode to Robbie Burns. The poem sums up the spirit of the event well and follows in its entirety.

We come here to salute ye,

with pipes, and wit, and mirth.

But just why, Robbie Burns,

should we remember ye, somehow?

What have ye got about ye,

To make us laud ye, this day, now?

for writing poetry and song, 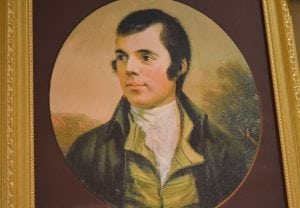 A portrait of Scottish poet Robert Burns sits upon the mantel at Highlands Country Club for Burns Night, Jan. 26. Photo by J. Tao

Ye had a generous spirit,

giving poems away for free,

When ye could’ve used the money,

as ye fought off poverty.

Though farming was quite harsh,

Thrilling in beck, woods, and glen,

where the Lowland mountains stand.

and a wee, ill-fated mouse. 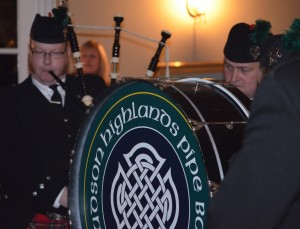 When ye gave up plowing soil,

for numbers, not words, in town,

From one of scorn to great renown.

Ye dined with lords and literati,

but never lost the common touch,

crass greedy rogues and such.

Ye were clearly close to God,

and then the radical French sequel,

Ye had courage and a vision,

and while ye died two centuries ago,

There’s much in ye still worthy,

so we gather to tell ye so.

But yere fine points notwithstanding,

and despite our fulsome praise,

Ye should not be assuming

We remain a trifle troubled

by yere relationships with lasses,

to refrain from endless passes.

ye loved her above all others.

Nor were they the only ones,

Whom ye also romanced and left,

to chase some fresh amor.

Yet when we tally up yere vices,

we find there’s not too many,

And a man would not be mortal,

if he didn’t e’er have any.

So to ye bonnie Robbie,

we raise our cups in cheer,

For in these Hudson Highlands,