Property owners driven to befuddlement by Philipstown rules on driveway installation can look for relief soon. The Town Board and code enforcement officer last week began reviewing town driveway provisions, with the intent of making them easier to understand while containing more basic details. One example: making clear that the driveway law only applies to the end of the drive that intersects with a public road or private connecting road. 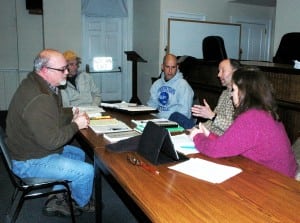 The Town Code’s Chapter 78, on driveways, demands a town permit, from the code enforcement office (formerly the building inspector) for construction, alteration, or introduction-by-usage of any “roadway, driveway, entranceway, exitway or any other type of way for vehicles, pedestrians or animals or otherwise, which will intersect a town highway, town-approved highway or a private road which intersects a town highway or town-approved highway.”

The permit compels applicants to meet certain criteria, such as ensuring that the driveway “at the point of entrance” onto the road “shall have the optimum of sight distance,” allow proper drainage of water, “minimize any possible damage or injury to town highways or town-approved highways” and “provide the maximum safety for all traffic.”

The Town Board met on Jan. 23 with Kevin Donohue, code enforcement officer, who has been drafting changes, because, he said, “our law on the books has not kept up with the times. Our driveway permit system works. There’s nothing being missed right now; there’s no emergency [forcing the town] to do this,” Donohue told the board. However, he said, the driveway provisions could use some clarification, such as more explicit mention of the fact that “all we’re doing is managing the apron” or area where drive and road merge, so as not to interfere with the latter. “We’re only regulating the first 30 feet” of drive, he said.

Other measures in town law, such as those covered by the building permit, deal with additional aspects of driveway construction in regard to such matters as steep slopes, wetlands and health impacts, he explained. He proposed recognition in the text of residential, commercial and temporary access and cited the need to spell out everything more precisely overall. That way, according to Donohue, a property owner obtaining a driveway permit will not assume “now I can do anything” along the entire length of the driveway, regardless of whether conditions exist that raise questions about compliance with other aspects of local law.

“The idea is to get everything consolidated in one place” and thus more user-friendly, Philipstown Supervisor Richard Shea agreed. “This will help people avoid a lot of the pitfalls.”

Shea also recommended further attention to a related issue that the board touched upon in January 2012: maintenance of private roads, or, frequently, the failure to keep them up. “In the town, this is one of the biggest complaints,” he said.

With Donohue, the board likewise briefly discussed another problem, the mess created by property subdivisions, typically in decades past, which got filed with Putnam County but without town Planning Board approval, leaving some current residents in legal limbo as to their rights. Donohue pointed to the case of an elderly woman who wants to obtain a reverse mortgage for her home and learned quite belatedly of a long-ago subdivision affecting the property.

At times, subdivisions occurred out of ignorance on the part of the owners who undertook them but others obviously involved “someone again gaming the system. Some of these were insane — slivers of lots created,” Shea said. Whatever the instigation behind any single subdivision, often the result was that at the town level “we had no idea the property was being subdivided,” he added.

Before it adjourned, the board agreed to go over the various matters Donohue had raised and respond with any further input within a couple of weeks.