Those who have taken yoga classes may have heard or even participated in kirtan, a call-and-response chanting used mainly in Hindu traditions but now in the United States appearing more prominently in the practice of yoga. On Friday and Saturday evenings, Feb. 1-2, starting at 8 p.m. at the Garrison Institute, Krishna Das, a performer who has helped this style of devotional chanting gain popularity in the U.S., will perform in two public kirtans as part of a larger weekend retreat that he is leading. 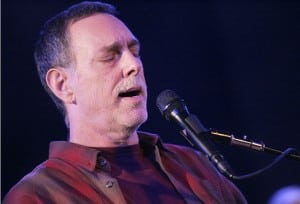 Krishna Das, on his website krishnadas.com, describes kirtan as “chanting the names of God.” On his audio series Pilgrim of the Heart, he said, “These chants have no meaning other than the experience that we have by doing them. They come from the Hindu tradition, but it’s not about being a Hindu, or believing anything in advance. It’s just about doing it, and experiencing. Nothing to join, you just sit down and sing.”

Kirtan, said Garrison Institute’s Communications Manager Nate Binzen, is considered “passive, devotional yoga” and “an aspect of yoga activity.” The chanting of mantras or hymns, usually in Hindi, Sanskrit or another related language, blends with storytelling of the Hindu mythology. Binzen emphasized, however, that for many, kirtan is “feel-good spiritual music,” with a lot of that feeling coming from the participatory nature of the group chanting.

Since kirtan consists of the repetition of one or two phrases over a simple melody, no previous experience is necessary to participate. Krishna Das often gives a brief explanation of the meaning of the chants and the stories, said Binzen, but for many of his fans, it’s the sound of the music that they find inspirational, energizing, or contemplative.

Accompanied by the mellow drone of the harmonium (a portable bellows-operated reed organ that looks like a file-cabinet drawer with a keyboard inside) and the soft rhythms of the tablas (hand drums), the music of kirtan can be mesmerizing and particularly suited to meditative practice. Krishna Das adds to the traditional kirtan a Western sensibility — his accompaniment may include violin, bass or guitar, and his melodies and harmonies are often distinctly Western. This influence, he acknowledges on his website, comes from his own background as “a white Jewish kid from Long Island.” 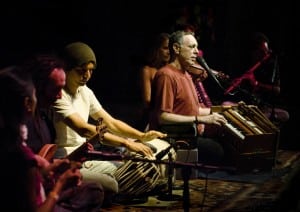 As a young man in 1969, Jeffrey Kagel (who later renamed himself Krishna Das) began following the spiritual writer/teacher Ram Dass. A year later, he traveled to India to meet Ram Dass’ own guru, Neem Karoli Baba, who taught Kagel, now Krishna Das, to chant as part of the Bhakti yoga tradition. He is quoted on his website as saying of this time: “We began to learn how to override the things that close us down. Chanting was a way of entering into that flow. The theory, of course, is that you develop the strength to continue to override the ability of that stuff to grab you and bring you down to a more conditioned state.”

After two and a half years, Krishna Das returned to the U.S. and eventually began performing kirtan in various groups. Since 1996, he has released 10 recordings, and he travels the world performing and teaching. His Heart of Devotion retreat takes place Feb. 1-3 at the Garrison Institute, focusing greatly on music, chanting and spirituality, but also including morning asana (pose) classes with Brooklyn Yoga School instructors.

The Garrison Institute regularly hosts meditative retreats of all kinds, but Binzen characterized this particular retreat as “more of a treat” — since “meditation is often an austere practice, sitting in silence,” he said, and there’s “something more light-hearted and easy” about this one. Registration for the retreat costs $215 (exclusive of room and board) and is available online at garrisoninstitute.org but will close Thursday, Jan. 31, at 4 p.m.

The public kirtans both run from 8 to 10:30 p.m. on Feb. 1 and 2 in the meditation hall, which Binzen said “is such a beautiful space, so suitable for music.” Tickets are available on krishnadas.com and cost $35 (plus $1.50 service charge).

The Garrison Institute has many program initiatives related to meditative practice, including research on contemplative teaching and learning, transforming trauma, and climate change and behavior. For more information about the institute, visit garrisoninstitute.org.