Bobby Fischer Against the World places the chess prodigy within the context of U.S./Soviet relations

A-list documentary film director and producer Liz Garbus was on her way to the Sundance Film Festival in January 2008 and found herself reading a front page New York Times obituary of legendary chess whiz Bobby Fischer. “When I got off the plane,” she said, “I became obsessed with his story and researching and writing about it. By the time I left Sundance, I knew it was going to be my next film.” In January 2011, while being nominated for her second Academy Award as producer of the documentary short Killing in the Name, her film Bobby Fischer Against the World opened at Sundance. 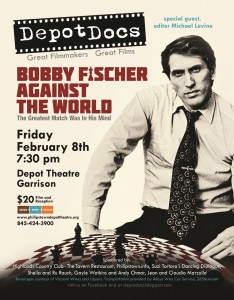 Garbus’ award-winning editor Michael Levine (Restrepo) will be at the Philipstown Depot Theatre on Friday, Feb. 8, to talk about the film when Bobby Fischer Against the World is presented by Depot Docs. Fischer is considered by many to be the greatest player of the game ever. Learning to play at age 6, he quickly became obsessed with chess, and by age 14 began competing in the U.S. Championships, winning eight, including the only perfect score in the history of that tournament. At age 15½ he became the youngest grandmaster and the youngest candidate for the World Championship up to that time.

The film follows Fischer through photographs, filmed interviews, television appearances, archival footage and letters, and with interviews of friends, fans, rivals and world chess cognoscenti, from his days as a child prodigy in the 1950s to his later years living in exile, a manic, paranoid and bitter man. It is here that Bobby Fischer’s story raises questions about the fine line between genius and madness, the deleterious effects of celebrity, especially on the developing personality, and the important role in that development played by parental attention and affection. All of these questions are there from the beginning, but hover on the edge during Fischer’s amazing rise to worldwide fame and fortune.

But the dramatic center of the film, and the tipping point of the life, is Fischer’s 1972 World Championship match with the Russian grandmaster Boris Spassky. The Soviet Union had dominated world chess for years, spending unlimited amounts of money to train and privilege its top players, determined to show its intellectual superiority over the decadent West. The Cold War was being waged on many fronts, and Americans, including chess-loving U.S. Secretary of State Henry Kissinger, whom Garbus interviews, saw Fischer as, well, a powerful pawn in the Great Game.

At the very least, the 21 matches played in Iceland between Spassky and Fischer, which Fischer eventually won, became a global media event. As shown in a clip from the film, NBC’s John Chancellor began his newscast in the summer of 1972 with a rundown of the day’s stories: the Vietnam War, economic turmoil, the growing Watergate scandal … “But first, Chancellor said, “Bobby Fischer.” After becoming World Champion at age 29, until his death in 2008 at age 64, those were the last competitive matches played by the man crowned king of the Game of Kings.

Bobby Fischer Against the World will be shown at the Philipstown Depot Theatre, Garrison’s Landing, at 7:30 p.m. Levine will be present for both a Q-and-A and reception after the screening. Tickets cost $20. For reservations, visit brownpapertickets.com or call the Depot Theatre at 845-424-3900.