Warns village green asset may need to be cashed in

The Episcopal Church of St. Mary-in-the-Highlands announced on Wednesday, Jan. 30, that it is confronting a financial crisis that could possibly, if not alternatively resolved, entail a big change for the village — specifically to the sprawling lawn situated at the corner of Main and Chestnut Streets in Cold Spring. 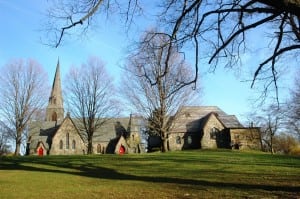 The lawn leading up to St. Mary’s Church (Photo courtesy of St. Mary’s)

As stated by St. Mary’s rector, Rev. Shane Scott-Hamblen, “The church is steadily going broke despite every effort at fundraising.”

Measures toward solvency for the organization, he said, have required decisive action. Scott-Hamblen will soon be vacating his post as church leader to offset operation costs, and the vestry (church council) is considering ways to capitalize on the church’s only available asset of significant value — the roughly 1.5 acre of open space that constitutes the northern portion of the three-acre property.

The broad sweep of open space that runs from the church to Main Street has been owned and maintained by St. Mary’s since the church acquired it in 1867. Gifted to the congregation by one of its most famous founders and wardens, Robert P. Parrott, the lawn has served as a hub of activity for both the church and the greater Philipstown community for many years. Despite its storied history, upkeep of the expansive space — specifically the cost of lawn care and snow removal — has become more than the parish can bear at this time.

In the interest of transparency and with an awareness of the emotional and aesthetic value of the lawn, Scott-Hamblen says that he and members of the church vestry are reaching out to the Philipstown community “in the hope that a public conversation will start about the future of our lawn” and “to gather ideas about resolving the crisis without altering the very nature of the heart of historic Cold Spring.” 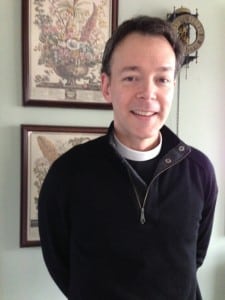 According to a statement, the church has three options: “to launch an appeal to the public for donations to raise a new endowment to keep the church viable; to lease the lawn under certain conditions to produce a steady income, perhaps to somebody who can afford to leave it as it is or possibly through a conservation easement or similar land trust arrangement; or to sell the land for development.”

Church leaders recognize that the lawn represents an iconic gateway to the village as well as being home to the Veteran’s Memorial and wintertime sledding and is a personally meaningful spot for many residents of the community. They prefer the lawn remain untouched. A circumstance that would allow for a financially healthy congregation without altering the use and potentially the appearance of the lawn, however, remains unknown.

Until the economic crisis of 2008, St. Mary’s supported itself through income earned from a modest endowment and contributions made by members of the congregation. Similar to many stock-derived funds at the time, the church’s endowment was devastated by the market crash, and the parish has been struggling to make ends meet for several years, trying to offset its deficit with fundraisers, bake sales, dinners, hall rentals and special events, all the while still chipping away at the principal of a diminished endowment in order to make ends meet.

The Episcopal Church requires that all of its parishes be financially self-sustaining. St. Mary’s does not receive pecuniary support from the bishop or diocese, which means the whole of the organization’s financial burden falls on local members of the congregation. Costs include heating and building repair, lawn maintenance and snow removal, as well as programmatic expenses.

“Our parish has exhausted itself trying to offset the deficit,” Scott-Hamblen said, adding, “This parish works exceedingly hard and is exceptionally frugal.”

St. Mary’s maintains approximately 250 active members who have, over the 12 years that Scott-Hamblen has served as rector, made significant improvements and contributions to the buildings and grounds.

“My rule is to leave a parish in better shape than when I came, and I believe that we’ve done that here,” he said. “Membership is up, Sunday attendance has increased, we’ve got a new steeple, a new parking lot and a new organ.” Illustrating the prudence of parishioners, Scott-Hamblen points out that instead of incurring the $13,000 installation fee for the new organ, church members did the work themselves.

Still, high oil prices and a stalled economy have left the church vulnerable. Running on an annual operating budget of $170,000, the church estimates that it needs about an additional $800,000 in endowment monies to continue to function with the current number of parishioners.