Residents threw a reservoir of cold water on the Cold Spring Board of Trustees’ proposed B4A zoning change for the Butterfield property at last Tuesday night’s (Jan. 29) public hearing as speaker after speaker railed against the idea.

The proposed change would authorize a new multi-use zone allowing for senior citizens housing, commercial buildings, the presence of all levels of government services and the construction of single-family homes. The amendment would also require that the actual site plan conform to the concept as already presented to the board by Butterfield Realty LLC. 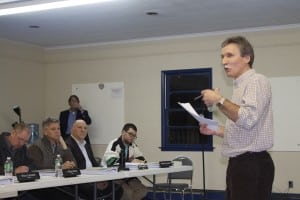 Peter Henderson addresses the Village Board at the Butterfield hearing Jan. 29.
Photo by K.E. Foley

While some speakers argued against various aspects of the plan itself, even more vociferously opposed the notion that the zoning approval should come first before any of the long-promised municipal benefits of the project come into sharper focus.

“This plan is probably something most people could live with,” said Peter Henderson. “But the Village Board hasn’t negotiated strongly. What’s in this for us? Why give away the trump card?” he asked, as did others.

Many speakers urged a return to the planned unit development (PUD) approach, which would involve greater integration of the details of the plan before approval could be granted.

The PUD approach was developer Paul Guillaro’s first choice when the plan was presented early in 2012. But Guillaro withdrew his application ostensibly after he perceived too much opposition to the plan details from the Cold Spring Planning Board. Accounts, however, differ as to the factors contributing to the application withdrawal. At Tuesday’s hearing Tim Miller, planning consultant for the project, asserted the Planning Board had rejected the PUD concept, but Planning Board member Dick Weissbrod strongly objected to that version of events.

Nevertheless, the wisdom of the subsequent decision to float a “concept plan” and pursue a zoning change first must now be called into question by even the instigators of it six months after it began.

Fifteen of the evening’s 20 speakers spoke before an audience of perhaps 75 against the zoning change, bringing to bear an assortment of objections to and questions about the project. Further bolstering the overwhelmingly critical reaction were several negative-only letters from people who could not attend, read into the record by the slightly shell-shocked trustees at the close of the hearing. One missive was actually a petition against the zoning amendment signed on by 59 people (a few of whom also spoke at the hearing). 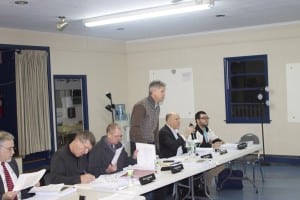 The Village Board presides over the public hearing on Butterfield Jan. 29.
Photo by K.E. Foley

Notably, many speakers had praise for or at least cautious optimism about the developer’s reputation, his local roots and his willingness to listen to community input. Several speakers also acknowledged the developer’s right to make money on the property, although there was much questioning of the correct balance between that right and the community’s interest.

But it was the promise of enhanced and consolidated municipal services to be housed in one of the two commercial buildings as an inducement for approval that had speakers in full skeptic mode. People wanted to know why the trustees were considering a zoning change, even a “conditional one,” giving the developer new rights before having a more concrete understanding of the county government’s intentions, as well as the town’s and, for that matter, the village’s itself.

“The commitments that are whispered by the county, the town and the village simply aren’t there,” said Weissbrod, sounding an oft-repeated theme. Weissbrod also chided the Village Board for not having dealt with the issue of fast-food franchises and the tax positivity of the project before suggesting a zoning change.

Consistently speakers called for the use of a PUD as a method that would force various governments and the post office to declare their actual plans rather than having to wait for what might happen after the buildings are built.

During the hearing, Mayor Seth Gallagher acknowledged that there was no guarantee that one of the planned buildings would house the municipal services after approval — but he argued, “Without the zoning change there would be definitely be no new municipal services at all.” He didn’t say why things had to be that way.

“What remedies are there if the project is not in substantial compliance?” asked James Geppner. “A PUD means substantial details upfront, he added.

“The zoning change is too broad and too risky,” said Dar Williams, who spoke of other towns she had visited and studied where all their acreage was taken up with national chain stores as a way of making money. We don’t want that.”

Many speakers used the term “strip mall” to express fears of the consequences of too much retail space begging for tenants. They also scolded the village trustees for not addressing the recommendations of the village’s Comprehensive Plan to amend Village Code to deal with fast-food franchises and other undesirable commercial enterprises.

Several critics also contended that the fiscal consequences of the project on the village finances also need to be studied by an independent party before credibility about the project’s tax positivity is established.

A few speakers, including County Legislator Barbara Scuccimarra, Comprehensive Plan Board chairman Michael Armstrong, former trustee Airinhos Serradas and former Planning Board member Joseph Immorlica, urged quick action on the zoning amendment approval as a way of moving the project forward after so long a period of consideration.

Armstrong suggested residents “don’t look for too much at this stage.” He described the process as an ongoing negotiation that could yield beneficial results, including greater tax revenue for the village. Serradas also dwelled on the likely enhanced tax revenue and the benefits it could bring the village. He also said it was important to “show Albany we can govern before they decide to move on consolidation [of local government].”

John Cronin, whose Paulding Avenue house sits across the street from the 5.7-acre Butterfield site, made the most personal statement in favor of the zoning. “I live across the street from a junkyard. I look at it everyday. I bought the house (10 years ago) believing Cold Spring was the kind of community that wouldn’t let it stay that way. I was wrong.” Cronin said he hadn’t seen a better plan offered for the property and that he would personally be watching carefully to see Guillaro complied with the concept plan. Cronin is a noted Hudson River environmentalist. “Don’t let the perfect be the enemy of the good,” he urged.

In the immediate aftermath of the hearing, it was impossible to discern the status of the project or what next steps the trustees would take. Two trustees said privately they didn’t see the zoning change being approved and that the PUD would have to now be reconsidered.

Further complicating the matter is the upcoming village election in which the mayoral slot and two trustee positions are in contention. Mayor Gallagher has said he is not running. Some speakers suggested, to apparent broad agreement, the current board membership should refrain from voting in the matter until voters could express their wishes through the new election on March 19.