As plans for the May 5 Putnam County Classic (PCC) bike race continue to evolve, little seems in doubt about the beginning: Some 500 cyclists, including world-level competitors, will gather at gather at Dockside Park, start at the bandstand at the Cold Spring waterfront, and speed off on a cross-county tour before returning to the village and the finish line.

The hard part is figuring out where to put the finish line.

For race organizers, Plan B best fits the bill: bringing the race to an end on Cross and Fair Streets. But Main Street merchants want to see some action too, so an alternative Plan A locates the finish line on Main Street, near the Garden Street-Kemble Avenue intersection. And lest neither Plan A nor B work, there’s a Plan C on the table as well, with a finish line near Mayor’s Park on Fair Street. 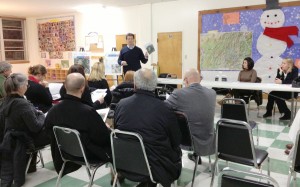 Eustice described Plan B as “the practical solution for 2013,” offering Cold Spring “a beautiful spectacle without too much aggro,” or aggravation.

The organizers emphasized that they want the race to not only be great for the cyclists and their fans but for Cold Spring residents and businesses, along with Putnam County as a whole. “I think this is the opportunity for us to create something really special,” said Fusco, who lives in the village.

Like its 2012 autumn predecessor, the 2013 Putnam County Classic won’t technically be a race in the conventional sense (with a trophy at the end), but more of a time trial. “It’s a hybrid,” Eustice said. “It’s a race but it’s not a race.” Also as in 2012, the PCC will be two races wrapped into one, with a 79.6-mile International Cycling Union (UCI) World Cycling Tour ride for serious cycling competitors and a 37-mile version for those less enamored of distance.

Philipstown Town Board Member Nancy Montgomery, who works in the local restaurant-catering sector, recalled the problems with the October race and the way it hindered business on a beautiful fall day. “You get a handful of chances, when you work in the village,” to showcase products and make money, and small businesses need every chance they get, she said.

Pataki said plans so far are drafts and options, with everything to be finalized after subsequent discussions. The race is on the agenda of the Cold Spring Village Board’s Feb. 5 workshop and a Feb. 18 Chamber of Commerce and Merchants Association meeting.

Besides the issue of the finish line, questions still to be resolved include street closings, if any, while the race is underway, and whether a merchants’ street sale or festival will be part of the day’s events.

Other details appear to be set, or mostly so:

Eustice and Fusco said that parking will be dispersed, to prevent traffic jams, with shuttles to carry cyclists’ family members needing a lift. Plans call for much of the parking to be at the Metro-North railroad lot, so vehicles “don’t park on Main Street and bottleneck Main Street,” Fusco said. Another goal is to make the finish line photogenic; thus a finish line near Mayor’s Park, with the Cold Spring sewage treatment plant as a backdrop, isn’t a favorite choice.

Both Fusco and Eustice suggested the 2013 PCC could provide a framework for such future village events as concerts or automobile-free festivals. “You can start to build on this infrastructure” and adapt it to other things, Eustice said. “Whenever you have a big event it’s a learning event for the community.”

Other locations of the 13-stop UCI World Cycling Tour include St. Tropez, France; Copenhagen, Denmark; Rio de Janeiro, Brazil; Colombo, Sri Lanka; and Trento, Italy, putting Cold Spring and Putnam County in notable international company. According to Eustice, “People are coming from all over to get to this event. You want them to go back with a favorable impression” of Cold Spring.

Pataki said she wants to make sure they see the beauty of the area. She pointed to a map showing the race route winding through the hills and along the lakes and streams of Putnam County after the riders start in Cold Spring at the Hudson River. “It’s a Putnam County event and Cold Spring is going to be the crown jewel,” she said.