Outside engineer to assess road options in other locations

Philipstown Supervisor Richard Shea said this week that he expects the long-anticipated paving of the storm-ravaged lower tip of Old Albany Post Road to begin this spring. Two weeks after a lengthy and spirited public workshop on dirt road issues, he also said that no work would begin on other trouble-prone dirt road stretches until an outside engineering firm undertakes an independent assessment. 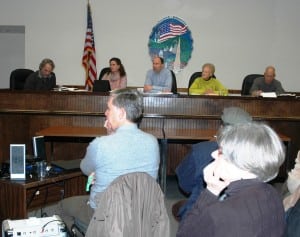 Supervisor Richard Shea, upper center, and other Town Board members listen and take notes as a resident comments during the dirt-roads workshop Jan. 16. Photo by L.S. Armstrong

Shea announced last November that to save money and promote human and environmental safety, the town sought to pave select sections of dirt roads, sites of frequent washouts and other problems. Along with the 450-foot southern strip of Old Albany Post Road near Continental Village, likely priorities he mentioned included a mid-section of Old Albany at Saunders Hill and a piece of South Mountain Pass east from the junction with Route 9D.

News of the town plans set off a wave of opposition and questions from those who live on and/or love dirt roads and who want to preserve the roads’ historic looks, although new houses have sprouted along them and current residents drive in motorized vehicles, not by horse-drawn wagons. Old Albany Post Road dates back to British — if not Dutch — colonial days and is on the National Register of Historic Places, a distinctive form of recognition.

As the public debate continued, critics questioned the approaches of the Philipstown Highway Department and long-time Highway Superintendent Roger Chirico in caring for dirt roads. So Shea proposes to get a second opinion.

“Our intent now is to bring in a new engineer and get a fresh set of eyes to look at it and see where we go from there,” the supervisor said Jan. 29, referring to the western edge of South Mountain Pass and similar targets for paving — or another viable remedy. “There are places in town where there could be a solution that involves pavement.”

Paved roads “stay put,” Shea said. “They paved East Mountain Road,” where he lives, about 10 years ago “and it stays put.” Had it not been for the paving, the road would probably have suffered severe damage during the recent hurricanes, he said.

However, he noted that a piece of Indian Brook Road “collapsed down the hill” with hurricane damage but that “there’s no plan to pave Old Indian Brook Road. There’s no plan to pave large sections of Old Albany Post Road.” But the town will determine the best way to deal with the surface of Old Albany Post Road between Philipse Brook and Cutler Lane, he said. “There’s a lot of different aspects” to repair and maintenance on any particular dirt road, including terrain, stream beds, steep slopes, soil, and similar features, he added.

He said there’s no fixed date yet for the outside engineering assessment, although the town has a firm in mind for conducting it. After the analysis, the Town Board will review the results, discuss possible ways to proceed, and consult Chirico. “It’s important to get his input,” Shea said. For most dirt-road sections viewed as possible paving targets, “nothing is going to happen overnight,” he said, reiterating comments made at the public meeting. “There’s been no major paving done in the town in over a decade.”

Meanwhile, he said, Chirico has issued a request for bids for the work on the 450-foot lower Old Albany Post Road project, on the agenda since a 2006 storm and the subject of three years of efforts to obtain funds from the Federal Emergency Management Agency (FEMA), get New York state approval, and otherwise make necessary preparations.

“Obviously, the first order of business is going to be that Continental Village section of Old Albany Post Road,” Shea confirmed. “That decision has been made. The FEMA funds are already in our account.”