The Cold Spring Police Department has a staff of 15 officers, including George Kane, who serves as officer-in-charge. At least one officer is on duty in the village 24 hours a day, 365 days a year. The total cost of police services as reflected in the 2012-13 village budget is $349,441. Of that, police officers’ wages are easily the biggest component accounting for $270,000. Another $25,500 goes to wages for parking enforcement and crossing guards. The balance includes such items as equipment, vehicle maintenance, gas, telephone and radio, and uniforms.

Twelve-year veteran George Kane is officer-in-charge for the CSPD.
Photo by M. Turton

A graduate of the New York City Police Academy, Kane is a 12-year veteran and has served on the CSPD for seven years. He previously served with the NYPD in the Fordham section of the Bronx. All of Cold Spring’s police officers work part-time, averaging 20 hours on duty per week. It is an experienced group. Kane estimates that his officers average 10 years on the job.

All officers are trained in first aid and CPR, and some are also trained as EMTs or paramedics. Officer Ed Boulanger is the veteran, in terms of service on the Cold Spring Police Department, having joined CSPD in 1987. In Kane’s view, a part-time force presents no unique challenges. “A part-time force works fine — it runs just as smoothly as a full-time force,” he said.

A heritage of local law enforcement

The CSPD has a long history. Mayor Seth Gallagher said that while the form may have varied over the years, Cold Spring has had someone responsible for local law enforcement “for probably 100 years,” and he thinks that a separate village police force continues to be warranted. “We live in a very tight, thickly populated community. There is commercial space, restaurants, a lot of activity — there’s a need for a police presence in the village.”

Asked if CSPD employs part-time officers only as a cost-saving measure, since salaries do not include benefits, Gallagher said, “There is a savings.” He added, “It has pretty much always been that way,” though in the past, full-time officers have been hired on occasion.

Kane reports to the Cold Spring Village Board monthly, listing all charges laid, parking tickets and moving violations issued, and calls received. The village’s busy summer months see an increase in police activity — a period during which Kane said the average number calls rises to about 120 per month. Traffic violations merit the most attention by village police, but Kane said that charges for possession of marijuana are also quite common. He said charges of marijuana cover a wide spectrum of ages — from teenagers through adulthood. “There may also be an occasional assault or domestic disturbance, but mainly it’s traffic violations,” he said.

CSPD policy is to not divulge where its officers live. Kane said, however, “I would not want to live in the same town I serve — for many reasons.” There is no residency requirement for Cold Spring police. Kane does see advantages to working in a small community. “In a village everyone knows what is going on and everyone talks. I get to know more people and have more time to help them if needed.”

Four full-sized squad cars are used by CSPD. The department has looked into switching to more fuel-efficient compact cars in the past, but it is not an idea Kane supports. “We explored that, but it’s just not practical. We have a lot of equipment, lights, computers,” he said. “The gun belt adds a lot of bulk, and most of us are 6-feet tall plus. We just don’t fit into a compact very well.”

Mutual aid is as much a part of CSPD operations as it is for local fire companies, and Cold Spring’s officers perform duties outside the village at times. “We back up the sheriff or any other agency when needed, and they do the same for us,” Kane said. 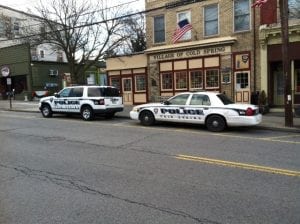 The Putnam County Sheriff’s Department handles a number of serious criminal situations in the village. “We don’t handle crime that requires extensive investigation; we don’t have the manpower and resources. We are often assisted by the sheriff or turn cases over to them,” he said. Serious situations include traffic accidents considered likely to result in a death, as well as robbery and burglaries. “We work with them, help with preliminary investigation, but they have much greater crime-scene capabilities.” That capability includes dealing with fingerprinting and DNA evidence and processing of crime scene evidence.

A recent case that required extensive investigation involved counterfeit $10 bills being circulated in the village. “We were involved, and charges were laid in Cold Spring Court,” Kane said. “The U.S. Secret Service was also involved, and a news release was put out by the sheriff.”

Currently the CSPD does not offer proactive awareness programs in such areas as drug-abuse prevention, scams aimed at senior citizens, or advice to local business owners to help prevent break-ins. Kane said that officers do, however, conduct checks at various village businesses each night. With the killings at Sandy Hook School in Newtown, Conn., still fresh in people’s minds, Kane said that CSPD officers continue to visit the Haldane campus “pretty much every morning and afternoon,” and that the practice will continue.

Police work definitely involves routine, and if there is one thing Kane feels he and many of his officers would be happy to do away with, it would come down to one word — “paperwork.” He also admits to having a pet peeve — people who unlawfully park in handicap parking spots. “I use absolutely no discretion” in ticketing those vehicles, he said. There is one other place he does not tolerate illegal parking: “In my police spots outside village hall!”

Annual performance reviews are not conducted for CSPD officers, but he said his performance is reviewed by the Village Board, and “if they have a problem they let me know.”

“I review my officers’ performance monthly and address issues as needed,” Kane said. When faced with the question that is inevitably asked of every police department, he responded, “We do not have quotas.”

Asked if the village seeks public input regarding policing, Gallagher said, “We certainly get it. And we sought public input as part of the Comprehensive Plan.” He said that residents with complaints or concerns about policing can either submit them to the officer-in-charge or go directly to the Village Board. “Concerns have to be submitted in writing,” he said.

Gallagher does not see the need for major improvements in the police department. “There’s always new equipment, new technology becoming available. They do a great job with what we have — the essentials,” he said. “We have terrific personnel — talented and very experienced officers.” Kane hopes foot and bicycle patrols can be increased in the village. “I would like to see … a foot patrol during the summer along with a bike patrol,” he said. The department has one officer trained in bike patrolling, and one bike.

Do residents have any misconceptions regarding CSPD? While it’s not exactly a misconception, Gallagher said, “People want speeding to be controlled, but no one likes it when they get a ticket.” He also said that when residents complain to police about speeding, they sometimes come to learn that the offenders are their neighbors.

Kane said some residents don’t know “that we are here 24/7 and that we only cover the village … and should a crime occur outside our jurisdiction, another agency would handle that.” He also said people may not realize that the CSPD office above the village hall is essentially unmanned and that the department does not have its own dispatcher. “We are dispatched by Putnam County 911 or the Putnam County sheriff at 845-225-4300 or 845-265-9111. My officers can be at any location in the village, in most cases in under one minute.”