It isn’t often that someone hands you a business card that identifies her as a “paper engineer,” but that’s exactly what Garrison’s Courtney Watson McCarthy’s card announces her as, and engineer paper is indeed what she does, in the very small community of designers who devise and construct pop-up books. Her most recent, Gaudi Pop-Ups, celebrating the designs of Catalan architect Antoni Gaudi, received a favorable review in The New York Times Book Review late last year. 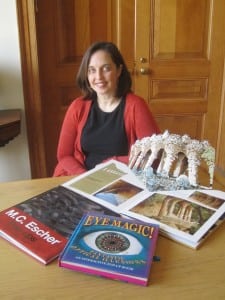 Courtney Watson McCarthy with her books, including a page opened from her Gaudi Pop-Ups (Photo by A. Rooney)

Watson McCarthy’s path to pop-ups was as circuitous as some of her constructions. There was “an emphasis on the arts” in her childhood household, and Watson McCarthy said that from a young age she loved to build, “using rolls and rolls of Scotch tape making contraptions.”

Studying scenic design at college, her favorite part was model building — “the geometry of it.” Finding it tough to make a living as a stage manager after graduation, she switched to graphic design. Chancing upon one of the first of the renaissance of pop-up books in recent years, Robert Sabuda’s 2000-released The Wonderful Wizard of Oz: A Commemorate Pop-Up, with its opening page of a cyclone twisting, Watson McCarthy’s first thought was, “Somebody’s got to do this for a living.” This triggered her to take a class on pop-up books, something she called life-changing. She began doing it on her own, for herself, taking books apart and breaking them down.

On a whim, in 2001, Watson McCarthy had a look at Sabuda’s website and decided to email him some pictures of her homegrown work. The very next day, she received a reply email from him inviting her to his studio. She spent time she described as “so welcoming, so enthusiastic about a new prospective paper engineer” with Sabuda and his business partner, Matthew Reinhart.

The fairy tale continued when they offered her a freelance job on a one-shot-deal project about Noah’s Ark. That very same day, however, she was offered a full-time job with benefits at Penguin Books/DK Books as a graphic designer, and the need for the security that brought caused Watson McCarthy to very regretfully turn the first offer down. Time went by, motherhood happened, and before she knew it, Watson McCarthy was back to doing freelance graphic design and “getting twitchy for a creative outlet.” 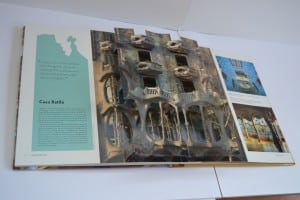 Out of the blue an email came from “a packager” (someone who puts these projects together) in the U.K., and Watson McCarthy finally got a chance to work in the medium that most excited her, providing the designs for the pop-ups included in a book on optical illusions titled Eye Magic. This was followed by an opportunity to design a sample page for a planned book on M.C. Escher, taking his plays on perspectives and making them multi-dimensional. The success of that one spread led to a contract for a full book, which appeared in 2011.

Using some of the Escher designs as examples, Watson McCarthy explained her creative process: “The concept is brought to me, and I’m given a number of images to work with. With each image I start by multi-printing it. I then spend time almost meditating on it. I take a thick pencil and sketch right on top of it, figuring out what shapes I see. It starts out rough, with heavy paper, masking paper and lots of tearing. It’s pretty easy to get something to stand up, but harder to get it to fold down. Then I refine it. Once it gets to the formation stage, I take the whole thing apart and scan all the pieces flat into my computer. I draw out [in Illustrator] the outlines of what I see, including fold lines. I measure all the angles, as the books are assembled in China without my control, so it has to be perfectly measured. It takes a lot of fine-tuning. I print the outlines out on heavyweight cardstock paper and cut out and glue and make another round of adjustments. I have two stations going: One has scissors, tape and glue, and the other is the computer, for analysis. Then I lay the image on top of it.” 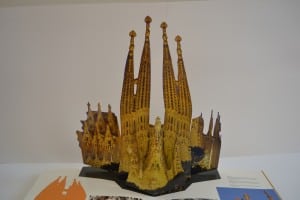 The Gaudi book came about in much the same manner. A client asked for it, and in fact Watson McCarthy wasn’t familiar with the visionary architect of the late 19th, early 20th century whose work defines Barcelona. “I was worried about doing it justice, as I was new to the subject matter,” she said, but quickly she was “blown away by what he created. He had this imagination and desire to create so long ago.”

She was also happy to work with so much color after all the black and white images from Escher. With a very tight publishing schedule, Watson McCarthy had just one month to do her “rough spreads” and said wistfully, “I didn’t see my children for that month.” She added that “there is a small window from approval by the printing house” to supplying the finished project, because “they are booked years in advance, as not many do this kind of work. With this project, it was either to work very quickly or wait a whole other year.” 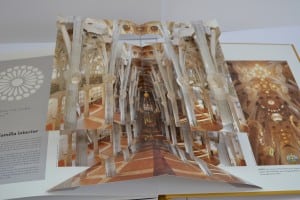 Spread of the interior of la Sagrada Familia

Sometimes it just doesn’t work, a situation that frustrates Watson McCarthy a great deal. For the Gaudi book, the biggest challenge was “getting the curve of the serpentine benches [found in Gaudi’s Parque Guell] just right.” Finding it difficult to get the paper to curve, Watson McCarthy worked up seven different spreads and finally had to admit defeat, which still troubles her. “I’m still sad I couldn’t do it. I hate to walk away, but I had to accept my limitations.”

She found more success with Gaudi’s most famous building, the Sagrada Familia cathedral, where getting just the right photograph to work with — one that was close enough to show his details but enough of a long shot to show it in its entirety — was crucial.

Handily, though, she is given more images to use than the expected goal for the book, and she is handed a great deal of creative control. Once completed, everything gets assembled by hand, and, she said with a touch of wonder, “They get shrink-wrapped, placed on a boat and sail around the world.”

Naturally, Watson McCarthy is a big fan of books of the paper variety, which she hopes will never disappear at the hands of digitalization. “I’ll always make books,” she said, “even if it’s just for my mother and father as Christmas gifts.” She does have several projects lined up, though, so those gifts will have to wait. Her next projects, in contrast to the Escher and Gaudi books, will be aimed at children; one involves numbers, and another pairs her with painter Kelli Bickman. 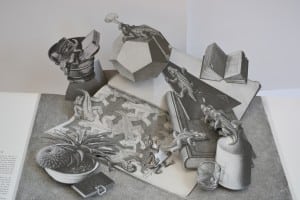 Watson McCarthy freely admitted to being a paper obsessive, saying, “I recently took a paper-cutting workshop. Twelve hours with Exacto knives. It was spellbinding!”

She has company, too. Every two years she attends a conference put on by the Moveable Book Society, of which she is a member. The group of 50 to 70 people includes paper engineers, collectors, book artists — “lots of people working on one-of-a-kind things. We spend three days together presenting and talking.  I feel ‘I’ve found my people.’ Last time someone presented on very small paper contraptions. When he opened it up, the room gasped collectively — we were all just a group of freaks!”

At these conferences there is always a lot of time spent talking about the future. “We’re all going to continue making books,” Watson McCarthy said. “It’s important to see this magic happen and touch it.”