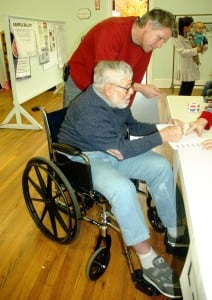 On Feb. 1, 2013, James Joseph Gallagher (93) passed away peacefully at his home in Nelsonville, N.Y. Gallagher was born in Danbury, Conn., on Sept. 26, 1919, to Joseph Gallagher and Mary (Roche) Gallagher. For over 50 years, he made Philipstown his home with his wife, Paula Tichy Gallagher, who predeceased him in 2007. Gallagher devoted his life to teaching anthropology, high school social studies and related subjects as well as exploring numerous local and world cultures.

During World War II, Gallagher served honorably in the United States Army from 1941 to 1946.  He was stationed in North Carolina, Oklahoma, Oregon, Mississippi and for 18 months in Italy and attained the rank of captain. He served in the field artillery in various positions including battalion staff and battery commander as well as aide-de-camp to division commander Maj. Gen. Charles L. Bolte and 34th division staff. He was active in the Rome Arno Po Valley and North Apennines military campaigns throughout 1945.

Gallagher started his teaching career at Peekskill High School in 1947, where he taught world history and anthropology. From 1961 until his retirement in 1979, he taught European culture, anthropology and the histories of Latin America, China and Japan at Newburgh Free Academy in Newburgh, N.Y. Gallagher also taught courses at the college level for NYU off-campus and Danbury State College.

In 1970, Gallagher took a six-month sabbatical from teaching and with his wife, Paula, traveled with their four children to Mexico. The family drove to Mexico in a Chevrolet Suburban that Gallagher had converted to allow the family to live out of the vehicle as they drove to Mexico. In Mexico, they lived in a small village, and the children attended a local Mexican school. During this trip, the family visited many Mayan and Aztec sites and traveled further south into Guatemala and El Salvador.

During the Vietnam War, Gallagher was active in the anti-war movement. His passionate advocacy against the war was based upon his understanding of the history of Southeast Asia and his belief that war should only be an option of last resort.

Gallagher became very involved in politics on the local level and served on the Philipstown Democratic Committee from 1971 until 2002.

Friends and family are invited to attend a memorial service at First Presbyterian Church, Cherry and Academy Streets, Cold Spring, on Saturday, Feb. 16, at 2 p.m. Donations in lieu of flowers may be made to Doctors Without Borders at doctorswithoutborders.org/donate.

Arrangements are under the direction of the McHoul Funeral Home of Fishkill, Inc. For directions, online condolences and memorial donations, please visit mchoulfuneralhome.com.