On Sunday, Feb. 17, the acoustic blues duo Piedmont Bluz will perform at the Howland Cultural Center in Beacon. Piedmont Bluz consists of the duo Valerie and Ben Turner. 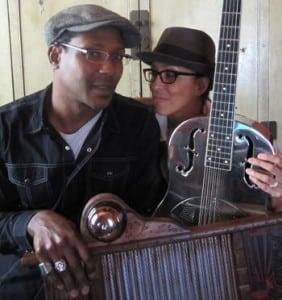 Valerie Turner sings and plays finger-style picking guitar in the Piedmont tradition, carrying on a long history of the Mid-Atlantic folk and country blues. She was a student of the late Virginia bluesman John Cephas, who famously carried on the guitar-harmonica duo tradition of Sonny Terry and Brownie McGhee with his partner, harmonica ace Phil Wiggins. Valerie also learned from guitar master Woody Mann. In many ways, she carries on the music of the great women of the acoustic blues, Etta Baker and Elizabeth Cotten. Along with Eleanor Ellis, she is one of the last authentic female practitioners of this genre known as “East Coast Blues.”

Ben Turner, who predominately plays washboard and is working on his harmonica chops, is now Valerie’s steady duo partner. He counts Newman Taylor Baker of the Ebony Hillbillies and Washboard Chaz for inspiration.

The Howland Cultural Center at 477 Main St. in Beacon celebrates Black History Month each year with visual exhibits and musical concerts. This year again the center will feature the African American experience in art and music, with Valerie and Ben Turner showcasing rural African American folk music. The concert begins at 4 p.m. on Feb. 17. A $10 donation can be given at the door.