Event linked to an international circuit

Cold Spring trustees have pointed thumbs up in response to the latest proposal for the May 5 Putnam Cycling Classic slated to begin and end within the village. The race, which organizers say might attract as many as 500 rider-enthusiasts, is part of an international circuit under the umbrella of the International Cycling Union (UCI). 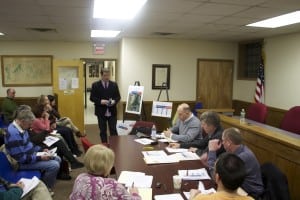 Speaking before the trustees at a workshop meeting on Tuesday, Feb. 5, Ray Fusco, a professional event organizer and village resident, walked the trustees through the details of the plan, displaying color charts on an easel. He said that he hoped the plans for the race “could become a template for future events of all kinds.” Retained by the Putnam County Tourism Board, local sponsor of the event, Fusco said he and others involved, including Libby Pataki, county tourism director, had developed the race plans in consultation with all the stakeholders in the village.

Central to the new concept for the event is minimal disruption to Main Street commerce during the course of an otherwise busy Sunday. Last October’s race engendered harsh criticism from merchants for the prolonged closing of Main and other streets. Some of that bad feeling still hangs over the current plans, although the new approach appears to mollify most. Fusco was not involved in the first race.

A parallel plan by local businesses to host a street fair on the same day is still in the formative stages. There is still some debate as to whether having it that day or on a weekend when there is not a special event is the best use of time and resources.

According to Fusco, the race will begin at the Cold Spring dock with the nearby dockside park used as a staging area for race participants and officials. Main Street will need to be closed for approximately 25 minutes to get the racers out of the village and onto two town-wide circuits. One group will do a 79.6-mile loop while the other will limit itself to only 37 miles. Both races are timed events.

The two races will culminate at a finish line that avoids Main Street and instead loops around the village center from the north via Route 9D and ends up along Fair Street. Fusco said final finish-line details needed fine-tuning but that he was confident all could be worked out. He emphasized making sure parishioners at Our Lady of Loretto church encountered no difficulties attending Sunday services.

Fusco said police, other emergency responders as well as the water department had all been consulted as to the plans and the respective department needs for road access, including to the village’s water treatment plant.

Plans also call for special parking at Mayor’s Park and the Butterfield property with special free shuttles to the starting line along with parking in the Metro-North lot.

Both Fusco and John Eustice, event producer, underscored the international connection through the UCI and how the race would place Cold Spring among other locations worldwide who also sponsor similar events, including Copenhagen, Denmark; Colombo, Sri Lanka; and Perth, Australia.

Eustice underlined that the event was not like the professional Tour de France. He described participants as “hobbyists who are serious. This is an opportunity to make Cold Spring a center of the growing bicycling culture,” he said.