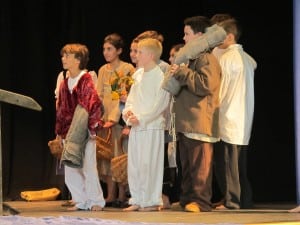 The Garrison School sixth-grade class transformed themselves into peasants on a magical quest as they performed their annual play this past Friday. Written and directed by Garrison’s own English Language Arts (ELA) teacher, Ian Berger, The Crown of Ivy is an original play about a group of teens who have a chance encounter with a fairy king.

Berger was inspired by fairy tales, ancient folklore and mythology while writing his play. “I always enjoyed reading fairy tales as a child,” Berger explained. “Unlike the stripped-down version of the stories we see in movies today, the classic fairy tale world is a strange, dark and dangerous place. I’ve always been intrigued by the psychological insights within the stories, and I set out to incorporate those themes into The Crown of Ivy.”

The sixth-grade class, accompanied by two seventh-graders and two eighth-graders, has rehearsed the play for a month. Acting coach Katie Feder worked closely with the students in the final week leading up to the performance, helping the actors overcome onstage jitters and hone their acting chops.

The play works in tandem with core curriculum standards because it aligns with the Middle Ages and King Arthur stories the sixth-grade class is studying this year for ELA and social studies.