Tucked around the curve of the eastern end of Beacon’s Main Street near the waterfall is the homey and welcoming façade of Vintage Café. A peek inside confirms the feel-good view outside: Above and around a black-and-white checkered floor there are literally hundreds of objects from the past, from signs to salt shakers, all evoking an earlier era, as do the aromas of the old-fashioned comfort food served there for breakfast and lunch each Wednesday through Sunday.

Vintage Café’s owners, Rebecca and Todd Mensch, opened their doors in October 2010. Both had worked in the restaurant business for years. Rebecca, a native of Beacon, had been on the service end, her early days including a stint as a bus-girl at Dockside — the fondly-remembered restaurant on the water in Cold Spring — as well as waitressing at The Bird and Bottle Inn and Hudson House. 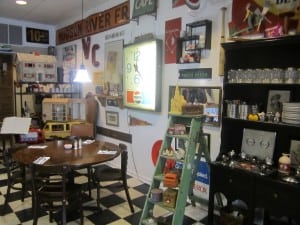 She always had a desire to open her own place and was biding her time, waiting for the right moment to do so. This happened when the youngest of her three sons entered school nearly four years ago and it coincided with the revitalization of the eastern end of Beacon. Although the Mensches considered starting a bed and breakfast, they decided to stick with just the breakfast end of things as an alternative.

Creating a homey environment was the goal, and they were aided by their large collection of vintage items, much of it related to Beacon and the Hudson Valley, which, says Rebecca Mensch, very much engages the diners. It helped that the location was in a part of Beacon that has maintained its historic feel. “We wanted it to feel like you are coming into Grandma’s kitchen,” she said. “We wanted a place that we would want to go into.”

The menu reflects this. Breakfast offerings range from seasonal pancakes (banana this time of the year), cinnamon French toast and oatmeal with apple butter and walnuts. Mensch makes a different quiche and frittata daily, along with soups (usually one vegetarian and one not) and stews, including hearty fare like beef stew and butternut squash soup. There are also plenty of sandwiches and wraps on offer; Mensch said the most popular are the pork Cuban and the grilled ham and cheese with pear.

The focus is on “simple ingredients,” said Mensch. “All lunches are served with salads, and we serve nothing deep fried — just good wholesome food.” Other menu items include chicken potpie, the omelet of the day and an assortment of muffins and scones. 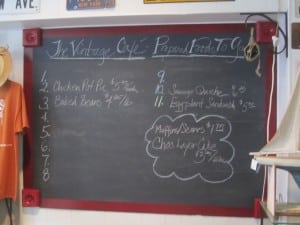 A live music brunch takes place on the third Sunday of each month. Mensch discovered that there were many musicians living in town, including some in the apartments above Vintage Café, and she thought it would be nice to have a family music venue instead of only being able to hear these musicians in bars. On Second Saturdays the café generally stays open a little later than usual to accommodate the crowds.

The clientele is a mix of locals who live in town, visitors coming to look at houses and many who have recently moved to town, according to Mensch, who said she “didn’t realize how many people visited Beacon” until she opened up, despite being a native. She thinks the new trolley service looping throughout the city will draw even more people to that end of town from the other end.

Having spent her life in Beacon, Mensch has seen the ups and downs and been through what has been called “the revival of” many times over, but she thinks this time it is different. “First it was this end of town, then the other end and this end died down, but this time everything is bigger and more spread out and things are booming at both ends. I’ve enjoyed being part of this new revitalization. It’s great to be able to answer all the questions that I’m asked — people have a lot of questions about Beacon, and it’s great that we’re a place which locals and visitors both come to.”