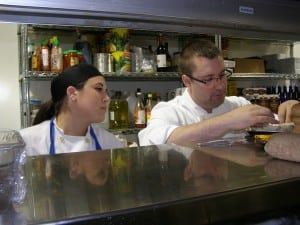 Collins served initially as sous chef and later as co-executive chef at Valley Restaurant at The Garrison for much of the past decade before departing in mid-2011 to take his talents to Beacon where he oversees seasonal New American cuisine at The Roundhouse property’s fine dining restaurant, Swift, its 2EM lounge, and The Patio, which features casual al fresco dining.

“Hopefully, when guests are with me, we’re creating memories,” Collins said. “No matter how food is put on a plate, it has to look good. If it doesn’t, we will redesign that plate. I’m very proud of everyone here, even our servers will not take something out of the kitchen if it does not look great.”

In its brief history — Swift opened July 20, 2012 — the Beacon restaurant has experienced typical new-business ups and downs, and Collins is adapting and leading his team to continue to move forward. Alessandra Benedetto of Poughkeepsie works the afternoon garde manger station and doesn’t mind long hours and demanding work.

“Chef’s very good at teaching you and showing you how it’s done,” Benedetto said. “He thinks that everyone works a little better under pressure, but we keep it pretty relaxed.”

Heading into a Friday evening dinner service in the Swift kitchen, Collins and his young sous chef, 24-year-old Chris Limerick of Middletown, were preparing to accommodate a full dining room.

“We spend a lot time together,” Limerick said of his hours working with Collins. “And when we’re not together, we talk through text and bounce ideas off of each other. We’re trying to engage people with our food.”

To keep guests engaged, the menu at Swift continuously evolves. Collins is testing a new dish for the evening menu. He places a sealed roulade of guinea hen in a water bath and keeps an eye on the temperature and time. 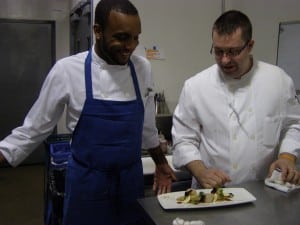 At tasting time, Collins gathers feedback from Limerick, his sauté cook, and garde manger. With a consensus, the roulade is ready to plate. Collins follows his passion and aims to first please with the eyes. He layers components with variations of shape and color, and embellishes the presentation with Concord grape vinaigrette, Espelette pepper and Maldon sea salt.

Ultimately, roulade of guinea hen with caramelized fennel and pickled quail eggs will grace the menu as an appetizer. The guinea hen tastes mildly gamey while the pickled quail eggs deliver a subtle sweetness. The caramelized fennel adds an intense aroma to the signature creation, but it’s the artfully placed crispy skin of the guinea hen that gives the dish rich texture. Collins finishes the dish with olive oil, grated lemon zest, and local pea shoots.

The culinary distinction that’s evolving at Swift results from dedication and the harmony that Collins creates with hand-selected ingredients procured from trusted purveyors. He believes that working with and around food was always in his heart, but a career in culinary arts wasn’t always on the mind of this 31-year-old. He credits hard-working family values and time invested to reconnect with nature as big influences growing up in Fairborn, Ohio.

“Growing up, we did a lot camping and we spent a lot of time as a family,” Collins said. “We’d make bacon on the fire, and we’d go fishing. That influenced me a lot. But people in my family were cops, and I always thought I wanted to be a cop.”

Family dynamics changed dramatically when Collins was 15 and his mother passed away. Lynn Marie Fleitz-Collins would not only leave her son with a financial cushion for his education, but she also instilled a passion in him to explore life.

“One of the reasons she had a life insurance policy,” Collins said, “was that when she did leave this world, I would be taken care of.”

Collins began his exploration into food that same year and took his first job learning basic cooking at Skyline Chili. He moved on to a company known at the time as Volume Services America, which serviced a midsized concert venue. 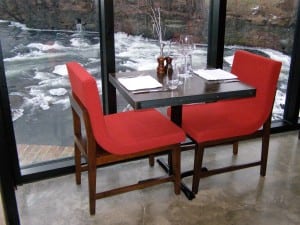 “The chef that I worked for at the concert venue was a culinary grad,” Collins said. “After learning from him and talking about culinary school, I decided to go to the Culinary Institute of America (CIA).”

The Midwestern teenager moved to Hyde Park and started his studies at the CIA in February 2000. Collins came away with a culinary degree in September 2001.

“The CIA is very hard,” Collins said, “and most of the students who do go to the Culinary Institute have jobs after school. But it was the best experience of my life. I have so much admiration for my classmates. And the faculty when I was there was second to none. They were the best in the world.”

Not only did Collins come away with respect for culinary professionals who advance the creative food world, but he met his future wife, Kirsten, while he was studying at the CIA. After graduating, Collins left the Hudson Valley to continue to grow in his profession, working in Cincinnati and Covington, Ky. But Kirsten, a graphic artist at the CIA, was a world away in the Hudson Valley.

“We had always referred to New York as home,” Kirsten Collins said, “and I asked Brandon if he wanted to come home.”

Collins found his way back to the Hudson Valley, and he and Kirsten are now married. They are parents to a 15-month-old son, Holden, and when they’re not working, they kick back at home in Wappingers Falls. With a busy toddler and demanding work schedules, they keep life simple when they can, which isn’t often. 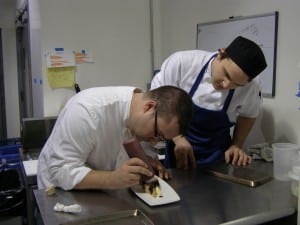 “I don’t slow down,” Chef Collins said. “The world is out there and you have to absorb as much as possible. Here in the Hudson Valley, you don’t have to look far for inspiration. Right now I’m inspired by the drive to work, talking to friends, my staff, my son, my wife, and whatever magazines I can get my hands on. And there are a lot of amazing restaurants in the Hudson Valley — Brasserie 292, The Hop, Back Yard Bistro, Crew, Valley. It’s hard to shut my mind off. It’s from the artist’s side on how something is accomplished. You can take inspiration from anything. It’s how you perceive your surroundings.”

Eighty hours a week, Collins finds himself surrounded by a committed staff working closely to do what Collins loves — test, taste, tweak, retest, and serve food at its best.

Serving that food in Swift’s dining room against the backdrop of Beacon Falls and Fishkill Creek keeps the inspiration flowing. The Roundhouse at Beacon Falls is located at 2 E. Main St., Beacon. For information, call 845-765-8369 or visit roundhousebeacon.com. 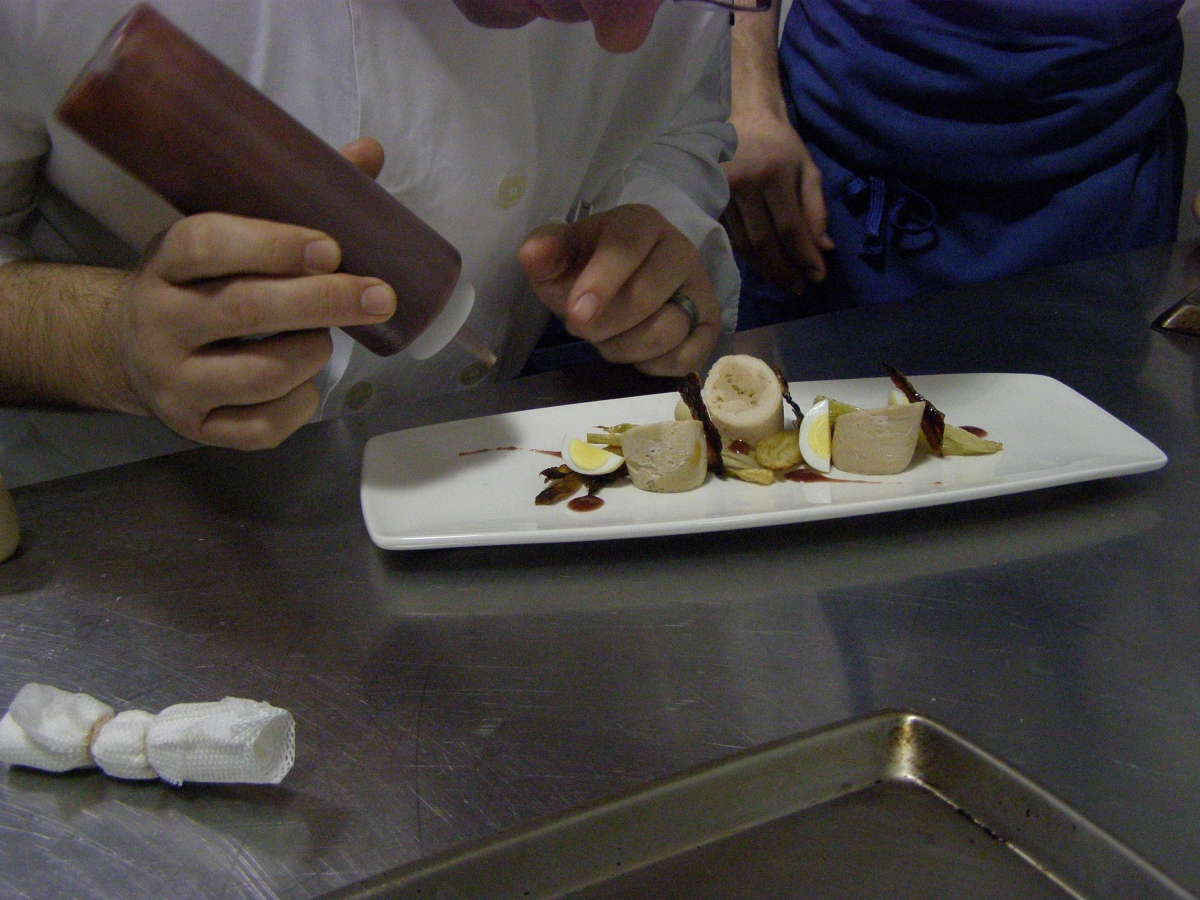 A variation of roulade of guinea hen takes a test run in the Swift kitchen. 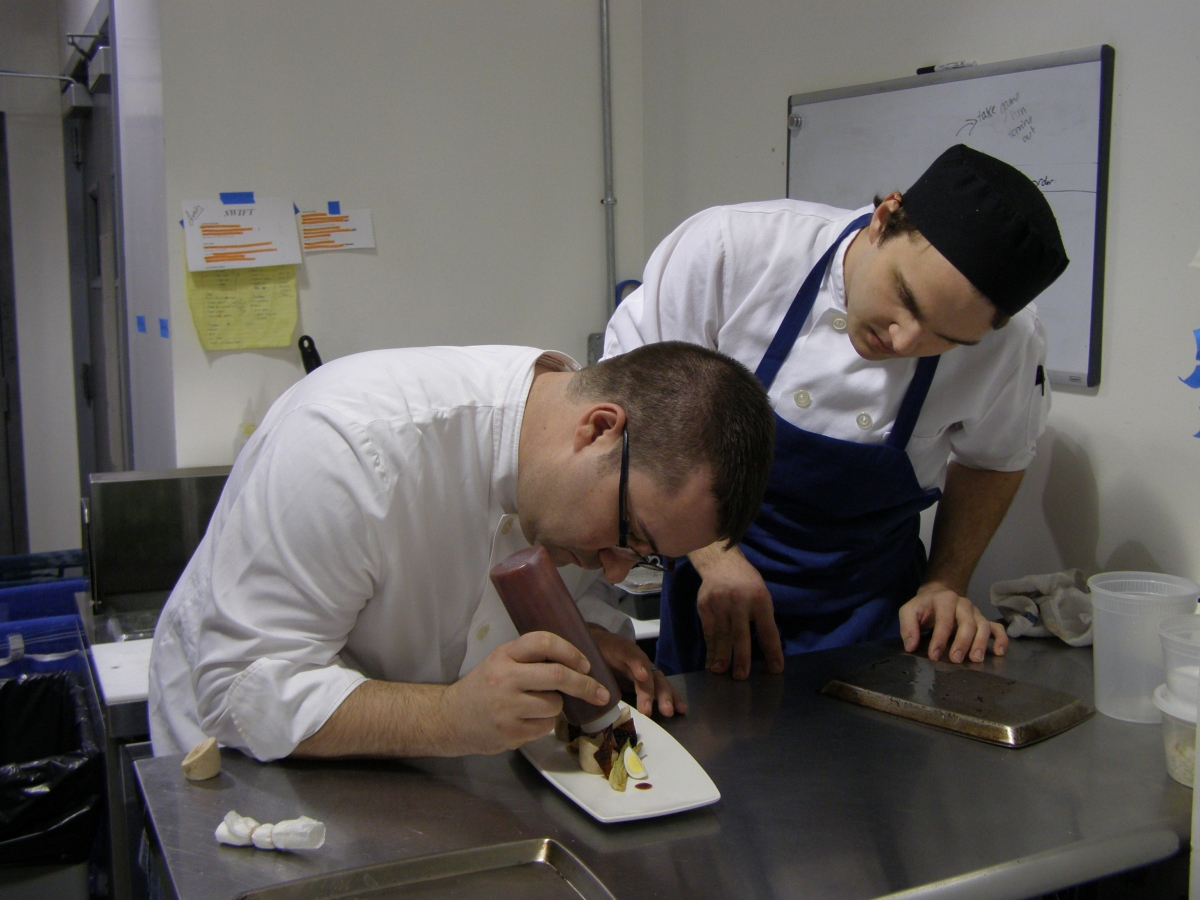 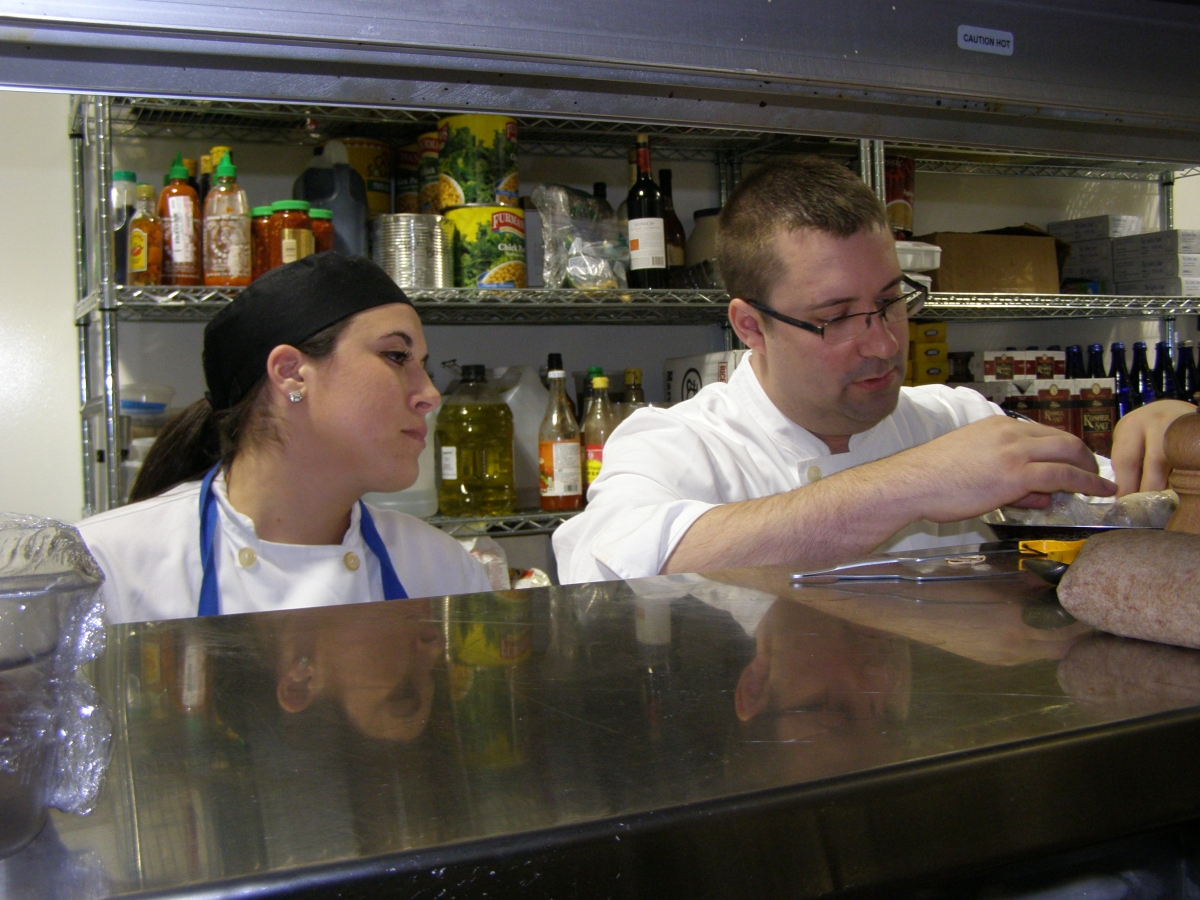 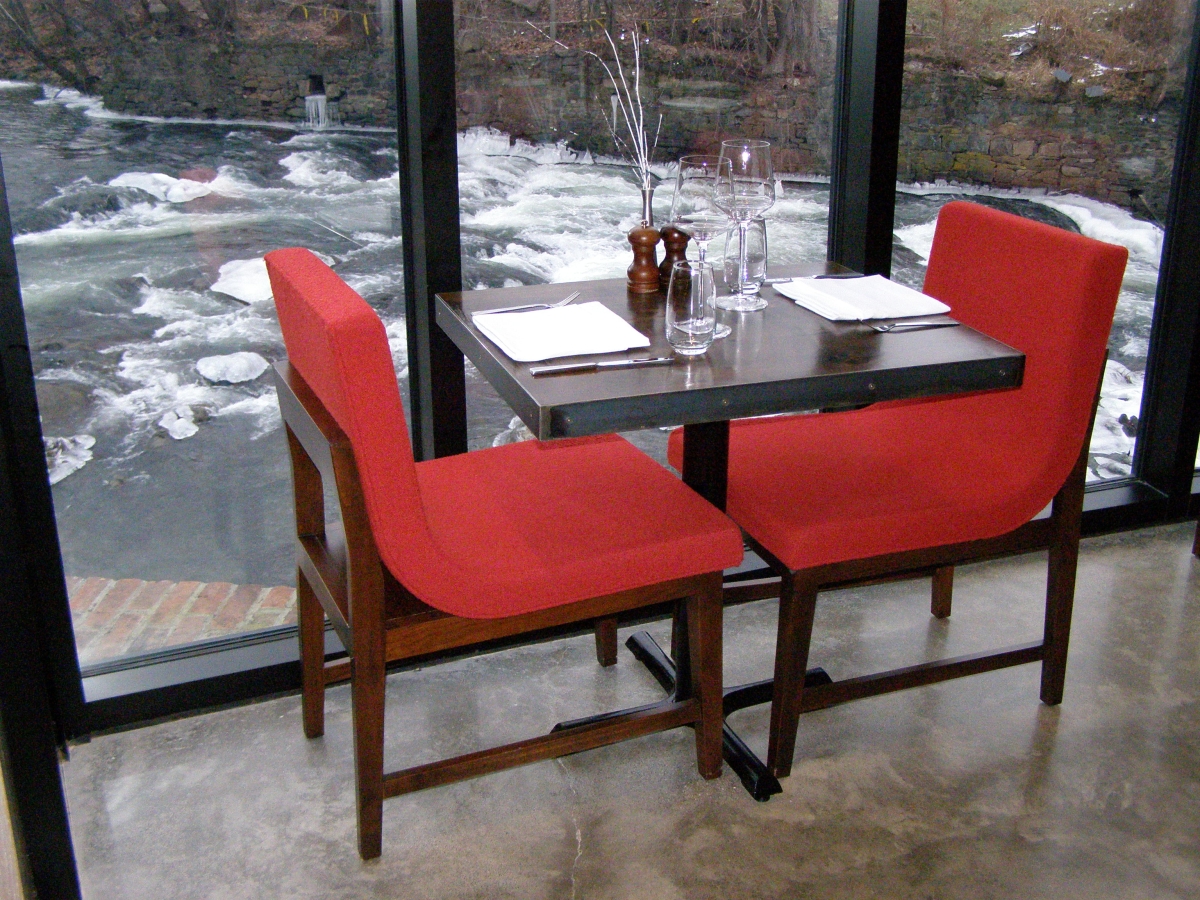