The Philipstown Town Board Thursday night (Feb. 7) got updates on the possibility of a new town government campus at the adjacent American Legion property on Cedar Street and a proposed “Hudson River Fjord Trail” linking Cold Spring to Beacon and Fishkill.

At its formal monthly session “right before the killer storm,” as Supervisor Richard Shea put it, the board also fielded a question of highway de-icing, sympathizing with a resident who complained about heavy use of salt on town roads.

In other business, board members discussed the possible revival of a controversial plan to construct a multi-home complex in an old quarry just beyond the Philipstown-Putnam County/Dutchess County line, but in the Haldane Central School District. As conceived in 2010, the project was for family housing, prompting fears it would overwhelm Haldane with students and taxpayers with astronomic costs.

Shea reported on ongoing, informal talks with veterans over possible use of the American Legion on Cedar Street — an evolving idea that began as an alternative to town office space at a redeveloped Butterfield Hospital property. The legion building is adjacent to Dahlia House, a small, vacant town-owned home behind Town Hall. “I think conceptually everybody thinks it’s a good idea,” Shea said. “It’s just how we wind up doing it.”

At present, according to Council0r John Van Tassel, also involved in the discussions, “there’s some confusion among the vets that they need to come up with a finalized agreement that we can present to the rest of the board. We can’t make an investment in this unless the vets are sure what they want to do. We’re not going to pressure them. They need to come up with a decision, which I think they were close to.”

“I think we’re making some progress,” Shea explained. He said he didn’t want to set a deadline for the veterans or for a Town Board determination of what to do about town government space needs. “We’re taking action. It’s just the ball is in their [veterans’] court now,” he added. “There’s a sense of urgency. We need to do something.” 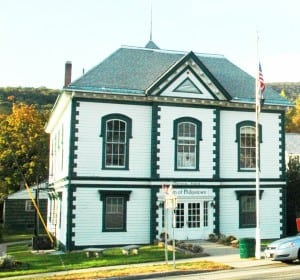 Dahlia House, a vacant home owned by Philipstown, peeks from behind Town Hall.

Currently, most town functions share the 1867 Town Hall, a white building on the border between Cold Spring and Nelsonville on Main Street. What once must have been a large, majestic assembly hall upstairs has been partly carved up into offices but remains dependent on a winding wooden staircase, making access by physically handicapped individuals difficult or impossible. Downstairs, town departments and boards jostle against each other in cramped rooms.

“Our biggest problem is space. We have too much going on in very small quarters,” said Van Tassel. “It’s not good for morale; it’s not good for organization; it’s not good for safety.” He described the American Legion property as “a great location” — close to Town Hall, with options for parking (all but non-existent at Town Hall), with the possibility of enlarging the building, too. “There’s a lot of potential on the site,” he said. Revamping the legion for town as well as veterans’ usage would create a three-building Philipstown government campus.

Shea told his colleagues of ongoing, multi-party interest in creating a trail along Route 9D from Cold Spring to Beacon. Philipstown received a $5,000 project planning grant, and the Town of Fishkill got one for $11,000, for a total of $16,000, but “it’s going to be somewhere around $45,000 to get the planning done,” he said. Beyond that, “we figure it’s going to be somewhere around a $12 million project” to build the trail. “It’s going to be a long process because it’s a big project.” He said that the ad hoc coalition expects to seek grant assistance from the New York State Department of Transportation (DOT). “We’re going to file for $12 million, for the whole project. Who knows if we’ll get it,” he said.

Shea said that participants in the trail effort include Putnam County, the Towns of Fishkill and Philipstown, Beacon, Scenic Hudson, Hudson Highlands Land Trust, Little Stony Point Association, and others, and that the DOT and Metro-North railroad have joined in discussions. The DOT remains “cautions about it,” he acknowledged. At the same time, he added, “I think everybody recognizes the need for this on a lot of levels — to address safety concerns, to address the potential for economic development” and to bring Cold Spring closer together with Beacon and Fishkill. “Ultimately, it would be great … to tie together the three communities. It really is an exciting project.”

During the public comment period, resident Richard Nairn questioned town practices in spreading salt on roads to combat winter ice and snow. “Excessive salt is being dumped on roads. This is out of control,” Nairn said. “This is not right. This is not good. The creeks are being contaminated, and the wells.”

“I agree. We have to do something about it,” Shea replied.

“I’d love to get an alternative for salt,” Shea said. “We’ll definitely take it up. We did get several calls about this.” Among other actions, he proposed establishment of an ad hoc committee, with citizen representation, to research solutions.

Shea also announced he intended to attend an upcoming Village of Fishkill meeting to determine what is, or isn’t, afoot in regard to purported Fishkill village plans to run a water line down to an old quarry just across the Philipstown border. Rumors of a renewed attempt by a developer to fill the quarry with housing have been heard in Philipstown lately.

Board members noted that Fishkill gets water from sources around the quarry, as does Beacon.

In spring 2010, the Walloon Trust announced plans to develop the quarry for housing, utilizing trailer-mobile homes or similar lower-cost structures. Established by the Montfort family, from the Montfort Group, a quarrying and masonry-supply business, the Walloon Trust later shelved the plans, at least temporarily, amid a public furor. Although located in Dutchess County and the Town of Fishkill (but not Village of Fishkill), the quarry falls within the Haldane school district; consequently, the Montfort plans raised the specter of numerous school-age children flooding Haldane, with Philipstown taxpayers footing the bill for their education.

“The peculiar part is that you can entertain all the development you want and the consequences fall on someone else who has no control over that,” Shea said.

“Somebody should be pro-active about changing the district” so that Fishkill does not decide “what would be good for their village at our expense,” proposed Councilor Dave Merandy, a school board president when the project first surfaced. “It would be catastrophic if they let what they had planned go in there.”

A deputy supervisor and lawyers

Before the meeting ended, with the board’s backing, Shea reappointed Councilor Nancy Montgomery as deputy supervisor, to preside in his absence at town meetings. 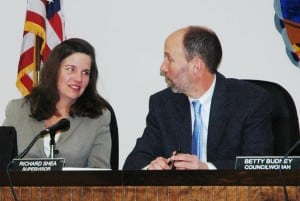 On a 4-to-1 vote, board members named Stephen Gaba as legal counsel at $125 per hour in a lawsuit brought by a Mill Road resident upset about installation of a temporary bridge after Hurricane Irene. Shea said the bridge project involved the county and DOT and “the Town of Philipstown really shouldn’t be dragged into it, but we are. So we have to defend ourselves. It’s time; it’s money.”

“If anybody can get us out of it, Steve can,” Montgomery said.

Merandy opposed selection of Gaba, who has already served the town government in various capacities. “I just think we should distance ourselves from Steve Gaba, from the folly that’s happening down in Cold Spring and his representation down there,” Merandy said.

Gaba became embroiled in controversy this past fall over Butterfield development project oversight when Historic District Review Board members disagreed with his legal advice and interpretation of the Village Code.

The board named two other lawyers, Laura Roberts and Kevin Irwin, to prosecute traffic law violations in the Philipstown Justice Court on behalf of the Putnam County district attorney’s office. Shea said that since the town began using lawyers to handle cases, there has been “an increase in prosecutions and revenue. We get part of that revenue. It’s kind of a plus.”