As far as I can see, the only thing good about February is that it has but 28 days.

This one in particular is firmly caught in my craw: As I write this, the temperature for the month thus far — and for some days previous — has not risen above the freezing point. Plus, we don’t even currently have the questionable bonus (questionable, at least, to this southern-born transplant) of some nice powdery snow for cross-country skiing or a short snowshoe trek to break up the monotony and warm the bones and soul. 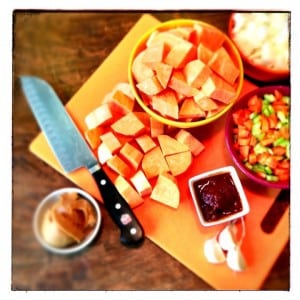 A so-called “knowledge worker,” I sit at the computer, counting the days until the witch hazel blooms and the snowdrops and crocuses slowly appear, doing what work I can and trying to stay warm thinking of … SOUP!

This is my professional homebound-computer-jockey winter trade secret: Always have a pot of something bubbling away on the stovetop — preferably something substantial, nutritious-but-tasty, easy-to-cook-and-eat, promisingly fragrant and physically warming. This serves a double-fold purpose: (1) when the job-at-hand isn’t going so well, you’ve at least accomplished one good thing, and (2) it’s an excellent reward when things do work out.

Not to mention the fact that if you do this regularly, and always make a large pot of your potage-du-jour, the physical and emotional benefits of freezing portion-controlled containers of your handiwork soon becomes apparent: Not to boast, but my freezer currently contains a couple of weeks’ worth of a curried carrot soup; a stew of borlotti beans with kale and chicken sausage (to which I’ll add some spelt when heating for a nutty crunch); and a chili of pintos, roasted squash and toasted dried sweet corn (a secret winter ingredient from Amish country which I stockpile — John Cope’s is the brand to look for).

Today, I’m thinking sweet potatoes. Since I read an article suggesting sweet potatoes as a healthier alternative to the standard white or yellow varieties, I keep trying to find new uses for them. (This has been getting easier — the culinary cachet of this humble tuber seems to be following the same trajectory as that of the formerly lowly crucifer, kale — so much so that my fellow foodies and I have wondered aloud more than once if they are not sharing the same celebrity press agent.) And like kale, the sweet potato contains a terrific amount of nutrients: antioxidants in addition to the beta-carotenes suggested by its color with twice the dietary fiber of white and yellow varieties. (Botanically the sweet potato isn’t even related to the other hundreds of varieties of potatoes, bearing a closer genetic relationship to the morning glory than to the other tubers.) 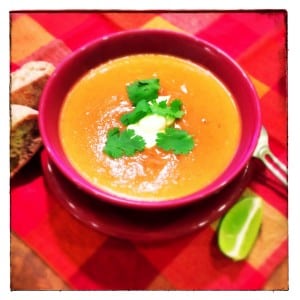 Today I’m imagining a puree of these copper-colored beauties to take advantage of their starchy creaminess as a solid basenote to quell the February freeze. Bringing up the gastronomic midrange and to further gratify my chilly soul, I’m adding peanuts (in the form of peanut butter, for easier blending) as a riff on a once-cooked Senegalese or Mexican peanut soup, the foods of warmer climes. A top note of smoky fire in the form of chipotle peppers for heat and depth reinforces the ethnic culinary inspirations.

This will of course all be rounded out by a healthy dose of onion-family members (can’t live without them), celery, carrots (more carotenes!) and vegetable stock. (I’m trying to be nutritionally kinder to myself lately, but a chicken stock would work just as well. The dormant carnivore in me would certainly work a little smoky bacon into the mix somewhere. Likewise, some shredded cooked chicken would be acceptable if you’re looking for a protein boost.) For just a little sweetness and to further accentuate the smoke (or maybe make up for the lack of the aforementioned bacon) I’ll add a touch of molasses.

Serve garnished with a squeeze of lime and a couple of sprigs of cilantro (or some other companionable herb), a hunk of crusty bread and maybe some raw kale salad (there’s that vegetable again!), and we’re good to go, and hopefully so is the cold.

Choose firm unblemished potatoes with no soft spots. I added cinnamon to this version thinking it works well with sweet potatoes in general, and it is a common ingredient in Mexican cooking. Chipotles in adobo are available in small cans in Latin markets. (I found them at Key Foods in Beacon. Penzey’s Spices, in the Palisades Mall or online, sells ground chipotles as a spice powder, which is great to have around for chili and other stuff but is obviously missing the adobo sauce. It will do in a pinch.) Makes three quarts of soup.

Salt and black pepper to taste

1. Heat the oil in a large soup pot and sauté the onions, celery and carrot until soft (about 10 minutes), stirring occasionally.

2. Add the garlic and cook for another minute. Add in the cinnamon and stir the mixture for a minute or so.

3. Add the broth and chipotles and bring to a boil on medium heat. Add the potatoes and molasses and bring back to a low boil. Immediately lower the heat to a simmer and cook covered for about 30 minutes until the potatoes are tender.

4. Add the peanut butter and stir to incorporate. Remove from heat.

5. Let the soup cool to a safe working temperature and puree it in batches in a blender or with an immersion blender in the pot instead.

6. Return to pot and heat to serving temperature. Adjust seasoning.

7. Serve finished with a squeeze of lime and cilantro (or other herb) and/or a dollop of sour cream … or not. I find that it is plenty satisfying naked.