The Paper met recently with Haldane Elementary and Middle School Principal Brent Harrington and three members of the sixth-grade team to discuss this initiative. (The fourth team member, Jeff Sniffen, was not at school that day.)

In descriptions of the positives of small school districts like Haldane’s, there is inevitable mention of the benefits of a personalized, “we know our students” approach. Seeking to utilize these advantages in a way constructive to both academic success and each student’s overall personal development, the school has instituted a Character Education program in both the elementary and middle schools. Called Second Step, the program was piloted last year and implemented this year in grades 1, 4, 5, 6 and 7, with a goal to expand fully to grades K through 8 in the future. 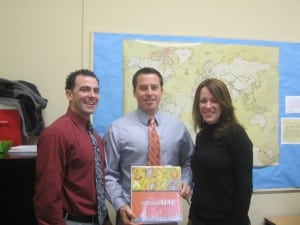 Led by the sixth-grade team of four core academic subject area teachers, Kim McCollum, Jeff Sniffen, Tom Virgadamo and Mark Wick, working in tandem with Harrington, the program uses consistent themes each year relating to broad categories like impulse control, self-regulation, empathy and communication, bullying prevention and, in general, how to navigate challenging social situations without adult intervention. Towards the end of sixth grade, substance abuse prevention is introduced as a topic.

When Harrington came to Haldane a few years ago, he found teachers interested in and committed to implementing a character education program. Harrington himself believes in this strongly, calling it “important to have an articulated social/emotional curriculum.” He noted that “the research is clear: Students who demonstrate empathy translate into academic success. It makes for fewer behavioral challenges and less of a focus on ‘managing’ our classes.”

The Elementary School Improvement Team (ESIT), Elementary and Middle School Assistant Principal Julia Sniffen and the Wellness Committee had been addressing these issues for some time. What was formerly in place was a 10-week transition-to-middle-school program offered at the beginning of sixth grade. Teachers felt this wasn’t enough, was inconsistent, and wasn’t supported by a program developed by experts in the field.

In his previous school district Harrington had exposure to Second Step, having helped implement it in an elementary school. Over a series of conversations, he encouraged the teachers to have a look at it. The teachers embraced the program as it gave a structure to the sixth-grade character development curriculum, and laid the groundwork for that curriculum in the earlier grades.

McCollum called it “teacher friendly.” Harrington added, “It takes the burden of planning off of the teachers, so they can focus on their academic area preparation but gives them a platform from which to work.”

In sixth grade, classes meet individually, one period per week, during homeroom; all classes follow the same overall template. Virgadamo described a typical session: “The lesson usually starts with a videoclip, in which the students see the topic modeled with a small group of kids their age. Key vocabulary is introduced and questions are raised … for instance with bystanders: How do you help solve the problem and not become part of it?”

Wick said the students “instantly make the connections. Playing a videoclip with real middle schoolers really gets them involved, and like everything with that age, once they’re engaged, they drop their defenses.”

McCollum concurred, “Students take it and go with it; they draw upon their own experiences and then they can apply this new knowledge to new situations they face.”

Citing the unit on empathy, Virgadamo said, “When we started, many did not know the word. Now they’re thinking before they speak.”

Questions and “vignettes” are built into each component of the package so there is a uniformity between classes and teachers, and the teachers don’t need to work up extensive lesson plans, as the plans are set in place already.

The students share personal experiences but are told not to use actual names, though they are welcome to revisit anything privately with their teacher later. Although the emphasis is on helping students recognize and analyze potentially problematic scenarios and learn to either stop them from happening or guide them to a peaceful conclusion without always seeking adult intervention, the students are always given the assurance that should they feel uncomfortable they should leave the situation and go and get an adult.

Issues specific to potential outside-school violence and security are addressed completely separately, and naturally children are not advised to try to handle any such situation without seeking adult help.

McCollum said that interacting with the students in this context was helpful to her in understanding what might be behind some academic issues. “We are not always exposed to them in social situations; we don’t see them in the cafeteria, etc., so this opens a different window.”

All of the teachers said the application to academics was evident. Giving an example, Wick said, “One lesson dealt with the vocabulary words ‘passive,’ ‘assertive,’ ‘aggressive.’ We posted the words around the classroom and can relate to them during class time.”

Virgadamo said, “When they work in a small group for labs, they’re using that concept of how to behave when working as a team.”

“I can point to a poster [from the program] during regular class time to help them consider each other’s perspectives,” added McCollum.

Parents are most definitely part of the program’s equation as well. With each lesson there is a worksheet included that goes home to the parents, who must sign off. Harrington said it’s educational for the parents as well. “The word bullying is thrown around a lot, for example. However, there are instances where a child has made a decision that has harmed another child but it is not bullying. Most of our disciplinary issues here at Haldane are isolated incidents. This helps to define things better.”

The Haldane School Foundation was supportive in covering half of the program’s costs (each kit, at one per student, cost $239) when Second Step was introduced during the 2011-12 academic year, with the rest covered in the school’s budget. Luckily with the obvious budget cuts looming, there isn’t a problem, as the kits are retained and can be used repeatedly, and the school now has the curriculum and will continue to retain it.

Right now in seventh grade, “specials” teachers (non-academic classes such as guidance) are addressing specific areas as part of their curriculum; this may change next year into a quarterly class for that grade. Harrington said it has been more difficult to implement it into eighth grade because of scheduling and other considerations but that it is very much a goal — one he hopes to achieve by the 2014-15 academic year.

In categorizing character education, Harrington said, “In the wake of Newtown, understandably there are safety and security concerns. Ultimately, the best measure of security is ensuring that kids are emotionally stable. Not that this guarantees it, but we have the benefit of knowing our students and, at the very least we can try to ensure that our kids are connected with other kids.”

More information on the program can be found at secondstep.org.