Talking with White and his wife, Evelyn Carr White

Sharr White claims he’s quite cynical. Hopefully he’s stashed that cynicism safely away so that he can fully enjoy a most heady period in his life: his debut as a Broadway playwright.

In January, his play The Other Place opened to very strong reviews, and its limited run at the Samuel J. Friedman Theater has already been extended through March 3. The storyline, laced with ominous mystery, concerns a brilliant scientist who slowly becomes undone from within by things she and those around her cannot immediately identify.

White, who lives in Cold Spring with his wife, Evelyn Carr White, is savoring being at the center of the “fast rising” and “up and coming” hyperbole, yet he knows that perception is deceptive; in many ways, actually, that’s the theme of his play. The reality is, he has spent years rising before dawn, writing away, seeing his work produced incrementally while toiling at other jobs, on a path to this period of wider recognition. 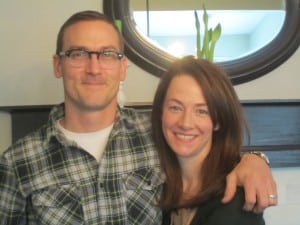 The Paper sat down recently — as last Friday’s (Feb. 8) snowflakes were just beginning to fall — with White and Carr White and talked about a range of things from his playwriting to her concerns with the impending budget slashes not only at Haldane — where she got narrowly edged out running for school board trustee last year — but in New York state as a whole.

The two moved to Cold Spring about six years ago, almost as a lark, choosing it partially because it afforded a train commute long enough for White to use the time to get creative work done, to and from his job as a copywriter in the fashion industry. They love it here, Carr White enthusing, “I feel so lucky; it was so random how we landed in Cold Spring, and I’m so grateful. It’s really beautiful and there are incredible people here.” Formerly Brooklyn residents, both grew up in multiple locales, Carr White in Boston, New Orleans and Virginia — her father was a professor — and White in Southern California and then Colorado — his was, too.

Such moves no doubt have contributed to what White calls the “lostness and foundness” themes running through much of his work. “Those aren’t real words, but they seem to be there in everything, though the structures are really different in each.” Including himself amongst them, White said, “All my friends who are writers have some alienating event that makes them removed.”

White found his calling as a writer after flirting first with biology (his father is a biophysicist, his brother an astrophysicist) and then acting. He received a master of fine arts in acting from San Francisco’s American Conservatory Theater’s graduate program and soon after departed for New York, where the usual joined-at-the-hip pairing of aspiring actor and gainfully employed waiter categorized his first years there. 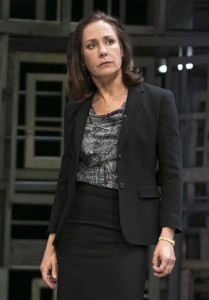 Carr White, too, trained to be an actress, receiving her bachelor of fine arts from Carnegie Mellon but finding being constantly judged as “a commodity” marred the ideals of the profession. She switched to interior design, studying at Parsons and then working for architectural, design and fashion firms. Meanwhile, the writer in White was stealthily overtaking the actor. He spent years writing what he now calls “unproduceable” plays and a novel, which was “politely rejected about 26 times.”

Things shifted in 2006 when the by-then writer, actor-no-longer had a play picked up by the Actors Theatre of Louisville’s renowned Humana Festival of New American Plays. “It was the first time I had a real professional production,” he said, “and it showed me that the real finishing school for a play is the actual production, where you can hone the crucial relationship: that between you and the audience.”

Deciding that pursuing an MFA in playwriting, which would entail about eight years of study as he didn’t have a BFA in the subject, was not the path for him, White said, “Anyone who goes through eight years of school should be a surgeon.” He added, “Because I’ve never formally studied writing, the learning process has been through doing.”

And doing he does, rising before dawn each day to put pen to paper, something that Carr White calls both admirable and essential. “Since I’ve known Sharr, his work ethic is staggering. He’s gotten up at 5 a.m. every day and written.” Turning to her husband, she added, “You go crazy if you don’t write. I give you a wide berth.”

White said, a touch wistfully, “It used to be 7” (before the birth of their two elementary-school-aged sons). He added, “It’s the only way to find the time. It happens to be a really good Darwinian weeding out of bad ideas. If I don’t feel compelled to get up, I have the wrong writing going on.”

With his playwriting profile increased through success at the Humana Festival, White began to accelerate in both productions of his work and attention, but to this day he has retained his “day job,” grateful to it for supporting his creative life and also for the opportunities it gives him to sharpen his use of words, streamlining them with precision, something he has put to excellent use in The Other Place, which has evolved from a two-act play into a finely-chiseled story told in about 75 minutes — unusual for Broadway. The paring down is intentional, White eliminating what he has called the “noise” of excess vocabulary in this piece.

That isn’t the case in his other work, for he tries not to repeat himself. “Once I’m done, if I attempt anything close to it, I’m making a bad copy,” he said, describing other works as, among other things, “epic, with an episodic structure” (Six Years) and “a well-made play” (Sunlight), two relatively recent works. A current project he is working on looks to be “a big two-act.”

With The Other Place, he “really wanted to tell the story from a first-person perspective. It’s an outsider’s point of view, and when you look at that through a lens it’s hard to avoid moving into unintended condescension. You can’t escape the commentary of the narrator. We’re experiencing it with her, and the barrier between commentary and experience evaporates. I really wanted to work with a drastic shift in perspective, bringing the audience in and keeping structural transformations going throughout the play.” 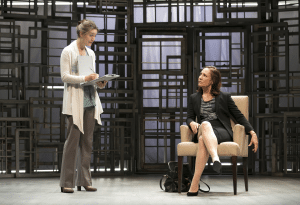 That the audience has not only been able to follow along and also experience a deeper understanding and empathy with its hard-driving protagonist, who, it is revealed, is afflicted with early, slowly-escalating dementia, has been fascinating to White, who said the general situation was suggested by a friend of his. White “couldn’t initially find a way into it. But I used some mental health issues connected with my family. A lot of behavioral stuff I endured … was like permission to get more personal.”

He has found it interesting “how much people want to connect with other people about what they’ve endured. The talkbacks have been very full; people want to be in contact with others going through this with a family member.” With a universal theme, The Other Place has already seen productions in Germany and Australia as well as in San Francisco, with more worldwide productions surely to follow. The work originated off-Broadway in 2011, produced by the MCC at the Lucille Lortel Theater.

The first person to read The Other Place, along with all of the other work White has produced during the 13 years they have been together, is Carr White. “She’s the first and mostly the only person I go to before I send it out,” said White. “She deeply understands theater.”

Carr White confirmed, “I give Sharr a good eye, from the perspective of an audience, an actor and a female.”

Haldane has benefited from that good eye over the past couple of years, as Carr White has applied it and her energies to working on programs to enrich the public school experience within a tight budgetary framework. Aside from running for trustee, she is the Elementary School PTA vice president; is on the PLAY Haldane and Buildings and Grounds Committees; has been a class parent for two years; helped to expand the elementary and middle school afterschool enrichment programs; and helped create new PTA-run (and thus funded) activities such as Lego Brick Kids, using skills honed in her former business life to provide enhancements for students in ways that haven’t tapped into Haldane’s already-constrained budget.

Such organizational and fiscal skills are not newfound — she helped found a neighborhood association when she lived in Brooklyn and was a multi-term president of a 40-unit condo board there, running executive and shareholder meetings.

Carr White is extremely concerned with the fiscal challenges Haldane is facing this year and in the near future. “I’m the product of public education,” she said, “and it’s sad to recognize there’s no way with the budget that my kids will have a comparable education to the one I had. Unfunded mandates are huge, and our community is being so stretched. Our neighbor is 96 years old and she can’t afford any increase in taxes. We’re considered a wealthy district so we receive no aid.”

Carr White thinks the current school board “has done a very good job, and I can’t sing the praises of [District Superintendent] Dr. Villanti any louder, but with this next budget we’re going to see some pretty deeply felt changes. So far there has been nothing the board has done that I wouldn’t have done. The Gap Elimination is in effect until the 2015-16 school year, and we don’t know who the governor will be and what the priorities will be. Is public education just not important anymore?”

Adding to the discussion, White said, “The irony of it is, it’s considered the teachers’ fault. There’s no recess break, no ‘creativity time.’” Carr White added, “When teachers can’t do their jobs, kids can’t do their jobs. Teachers have been designated the culprits when it’s not the teachers, it’s the lack of funding. The low-hanging fruit has all been picked, not to mention all the testing, which puts a stranglehold on everyone. It’s a real concern.”

The conversation ended with a now-common Cold Spring activity: a quick dash to a food store to gather provisions for the family in advance of a rapidly impending storm.