The Metropolitan Transportation Authority Police Department (MTAPD) is relatively new compared to other law enforcement agencies in the region. It was formed in 1998 when the Long Island Rail Road and the Metro-North Railroad Police Departments merged. After the terrorist attacks of Sept. 11, 2001, the department expanded and dramatically expanded its counter-terrorism capabilities. Its last expansion occurred in 2005 when the Staten Island Railway Police Department also became part of MTAPD. The department now includes 780 uniformed and civilian members. Its police officers are unionized.

Police officers with the MTAPD, all of whom are armed, are fully empowered under the New York State Public Authorities Law and are also commissioned in the state of Connecticut. The department’s jurisdiction extends across 14 counties and covers some 5,000 square miles, including New York City, Long Island, southeastern New York state and southern Connecticut. Philipstown is part of MTAPD’s northern region, which includes Metro-North’s Hudson Line. That line alone encompasses 75 miles of track and 28 train stations between Grand Central Station and Poughkeepsie.

Police officers hired by MTA undergo a six-month training program at the NYPD Police Academy followed by a further two months of training with MTAPD before being assigned to a field training officer.

Ensuring public safety of transit customers and employees and keeping MTA properties secure are the main goals of MTAPD. Its police officers are on duty around the clock, every day of the year. Its officers regularly patrol trains, road crossings, train stations and MTA rights-of-way as well as its rail yards and maintenance facilities.

MTAPD has mutual aid agreements with local and state law enforcement agencies throughout its jurisdiction, and its officers assist those agencies whenever the situation calls for it.

As in any police department, MTAPD officers investigate many reported incidents, including crime. But according to MTA spokesman Aaron Donovan, “The number one request for assistance at the stations is a person in need of help, including injured or sick passengers.” Trespass on MTA property is also a very common situation that officers handle. Other routine tasks include dealing with lost or stolen property, parking violations in MTA parking lots and assisting during disruption of train service.

When a crime is committed and an arrest is made, the offender is detained at one of MTA’s own facilities, not at the local police department. If an arrest takes place in Philipstown, processing is done at the MTAPD facility in Beacon.

The role and makeup of the MTAPD has changed in recent years, in particular immediately after Sept. 11. “The counter-terrorism role increased dramatically — the department expanded, adding 200 positions,” Donovan said. “Canine and Emergency Services Units were added as well as an intelligence unit. And we dramatically increased police patrols and inspections.”

The Emergency Services Unit, a tactical squad comparable to a SWAT team, is made up of specially trained officers skilled in such areas as heavy weapons, dealing with hazardous materials and train and vehicular extractions. Members of the unit are EMT qualified. 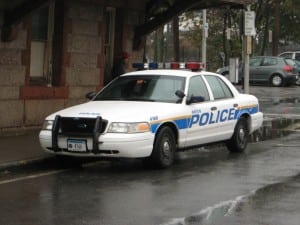 The canine unit includes 50 dogs trained in detecting explosives. Dogs are partnered with designated police officers and are deployed throughout the entire MTAPD jurisdiction. In addition to detecting dangerous items, dogs are used to track individuals and to clear unattended belongings left on MTA properties.

Every police officer has to deal with situations most people would not want to face. For MTAPD officers, “Every officer is different, but most will agree the most difficult are cases involving pedestrians struck by trains or vehicles carrying passengers that are struck by trains,” Donovan said.

That reflects one aspect of MTAPD’s work that the public doesn’t fully grasp according to Donovan — ensuring public safety in and around MTA properties and facilities. “Trespassing on or near the tracks is extremely dangerous, even if you don’t see a train coming. And disobeying signals and gates at grade crossings is extremely dangerous, and potentially fatal,” he said. Officers routinely patrol grade crossings along MTA’s entire network of tracks.