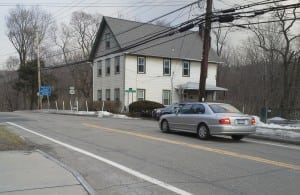 The intersection of Main Street/Route 301 and Peekskill Road is where a crosswalk will be created by the NYSDOT.
Photo by J. Tao

The Village of Nelsonville Board of Trustees reported at their meeting Tuesday, Feb. 19, that the New York State Department of Transportation will create one of the three crosswalks on Route 301/Main Street requested by the village in a resolution passed on Dec. 7. The Village Board had agreed the crosswalks were needed to slow traffic on Main Street and for pedestrian safety.

Trustee Ande Merante explained that the DOT said it would create a crosswalk across Main Street at Peekskill Road when the weather permits road work, but they declined the request for two other Main Street crosswalks, one at Billy’s Way and the other at Fishkill Road. The reason given was that there are no sidewalks at the other two intersections.

Merante said that Mayor Tom Corless, who was absent on Tuesday night, planned to follow up with the DOT and to show aerial photographs of crosswalks that have been created even though there are no sidewalks at those intersections. 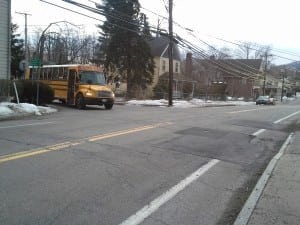 The intersection of Main Street/Route 301 and Peekskill Road is where a crosswalk will be created by the NYSDOT.
Photo by J. Tao

Both Merante and Corless are running for two-year terms as mayor and trustee, respectively, with no opponents. The voter registration date for the Nelsonville election is Saturday, March 9, noon – 5 p.m., and the village election is scheduled for Tuesday, March 19, noon – 9 p.m. Both the registration and election take place at the village office, 258 Main St. (through the Pearl Street entrance).

The board also scheduled a public budget workshop to take place at 7 p.m. on Monday, March 18, prior to the regular monthly meeting at 7:30.

The village continues to warn against parking for longer than 30 minutes in the loading area on the Pine Street Extension near Peekskill Road, as the road is too narrow for cars to pass safely. Merante added that it is even more dangerous now with snow and ice, and violators could be ticketed and a no-parking zone created should vehicles continue to be parked there for long periods of time.