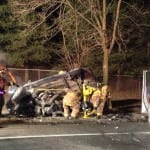 Firefighters from the Rombout Fire Company based in Fishkill responded to the Route 9 traffic accident that claimed the life of Christopher Hustis.
Photo by Tara C. Quinn

The New York state police have reported a two-car traffic accident involving the death of a Nelsonville man, Christopher Hustis on Friday, Feb. 22, at approximately 10:45 p.m. According to the police report, Hustis was traveling on Route 9 in Fishkill in the southbound lane when his vehicle swerved into the northbound lane and had a head on collision with a car driven by Tatiana Selca of Holmes, N.Y.

Hustis was pronounced dead at the scene. Selca was taken to the hospital and treated for non-life threatening injuries. The accident occurred just south of the Snow Valley camp in Fishkill.

The state police said they were still investigating the cause of the accident.