Next year’s tentative budget was presented at the Garrison School Board of Education meeting on Wednesday, Feb. 20.

Because there was very low attendance at the first public budget workshop on Feb. 13, many planning questions remain unanswered that should be considered while determining the school budget. These questions include what programs should be maintained at all costs, thoughts on how reductions should be made, and how additional revenue can be generated. The public is invited and encouraged to attend the budget workshops — Friday, March 8, at the 9:15 a.m. PTA meeting; Saturday, March 9, at 10 a.m.; and Wednesday, March 13, at 7 p.m.

First formal presentation to board

Superintendent Gloria Colucci and School Business Administrator Sue Huetter gave a presentation of the tentative 2013-14 school budget plan but stressed that there are still several unknowns (such as special education placements) that may change those numbers. 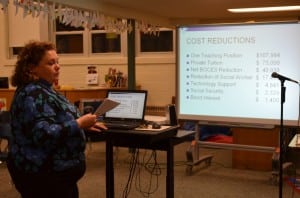 Garrison School Business Manager Sue Huetter gives a presentation on the tentative budget to the School Board.
Photo by J. Tao

The tentative budget total for next year is $9,744,207, showing a 2.8 percent budget-to-budget increase from the current year (which total was $9,475,913). Colucci noted that this total is not expected to increase further.

The most striking slide of the PowerPoint presentation showed how state aid has decreased over five years — almost 35 percent — from $957,879 in 2009-10 to next year’s anticipated amount of $623,773 (with a $106,132 decrease from last year’s amount of $729,905). Next year’s budget numbers reflect a loss of $85,000 in high-tax aid (aid previously give to districts with high property taxes), which this year was cut and deferred to higher-need districts, as well as the Gap Elimination Adjustment, a flat reduction of aid to balance the budget.

Once again, the school district plans to use funds from its reserves — taking out $554,057, which includes the $58,057 set aside for the BOCES capital project that was passed earlier this year — to defray the revenue amount needed from a tax levy. The preliminary tax levy is estimated at $8,525,887, and the maximum allowable tax levy is calculated at $8,530,666. While the preliminary levy is an almost 4 percent increase from last year’s levy, the amount is still within the mandated 2 percent tax cap through the designated formula, and Colucci emphasized that the projected tax levy would most likely not be as high as the maximum allowed and would likely be worked downward over the course of upcoming meetings. 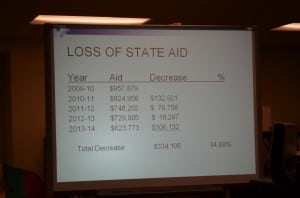 A slide shows decreases in state aid to the Garrison School at the School Board meeting Feb. 20.
Photo by J. Tao

Board Member James Cannon pointed out that the levy increase would not be so high if not for the loss of state aid. He also suggested that the public lobby for the school district to get an exemption for the BOCES capital project. Colucci added, “It’s getting the state to recognize that we own a share of those buildings, which is why we are responsible for the capital project on those buildings, and therefore they should be treated the same way our buildings are treated.”

The board discussed talking to political representatives about this and other funding issues, especially as Colucci and Haldane Superintendent Mark Villanti had met recently with state Sen. Terry Gipson about changes in state aid, and Colucci will meet with Rep. Sean Patrick Maloney in an upcoming meeting on March 8. The public is encouraged to communicate with legislators to promote support of mandate relief.