The Hudson River in winter is home to much life amidst the dark salted tides, the floating sheaths of ice and the frosted shoreline. Perched atop the quiet tumult, making its seasonal home in the pine trees, watching patiently for nourishing opportunities, sits the famous bald eagle. Once nearly extinct in the Hudson Valley region from the deadly effects of the insecticide DDT, which diminished the calcium formation in eaglet eggs rendering them too fragile for incubation, the eagle has come back strong in the last couple of decades. Wintering here presents greater opportunity to eat and mate than in colder climes in the more northern states and Canada. 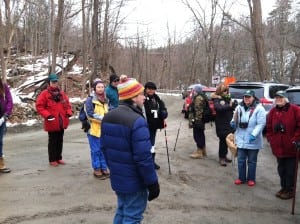 On a chilly but mercifully windless Saturday morning (Feb. 16), a group of 15 members of the Hudson Highlands Land Trust assembled at the entrance to the Audubon Society’s Constitution Marsh to trudge through snow and mud in search of this season’s eagles. Led by Pete Salmansohn, an experienced naturalist with national Audubon, the group was equipped with boots, binoculars, long-lens cameras and walking sticks. Salmansohn knows the 200-acre marsh habitat well from his seven years working there before moving on to the national organization. He lives in Garrison and also does educational work for the Land Trust.

Salmansohn spoke with an easy, dry-witted style that didn’t mask his sense of continuous wonder as he walked a familiar trail. Along the way he referred to other bird species, such as the black-capped chickadees eating at the Audubon feeder, and pointed out that this winter is especially rich in different bird species in the area due to irruption, a term signifying an influx of new species due to failed food supplies in their regular habitats.

He then related how the New York State Department of Environmental Conservation (DEC) initiated a program in the 1970s of bringing baby eagles from Alaska, where they are abundant, and husbanding their growth as a species here. Early efforts involved using puppets to nurse eaglets so they would not bond with humans, according to Salmansohn. “This year there are 110 eagles between Croton and Beacon counted by the DEC monitoring of roost sites,” he said. 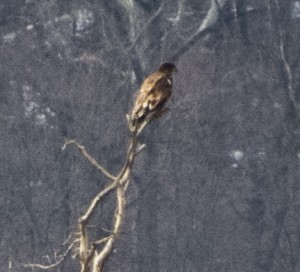 Eagles, Salmansohn explained, have a 5- to 7-foot wingspan, grow to about 30 inches in height and can live for 25 to 30 years. Females are usually a third larger and are more colorful. They are aloof creatures that generally mate for life. Salmansohn also underscored that eagles, despite their mythical image as a symbol of the nation’s strength and perhaps ferocity, are basically scavenger birds, which roost near the river in pursuit of their favorite meal, dead fish. They also crave dead deer and can occasionally get killed on Metro-North tracks feasting on a deer that had suffered the same fate. “During this time eagles are mainly conserving energy, using their superior eyesight to see what the Hudson tide is bringing in,” he said.

Ben Franklin, Salmansohn reminded his listeners, preferred the smart and wily turkey as a national bird rather than “a bird that stole food from other birds.”

A roost site at the riverbank property of St. Basil’s Academy is the first place lenses are trained from the marsh hiking trail. Salmansohn exhorted his watchers to scan the tree line, and before long shouts of sightings filled the morning air. A couple of eagles were perched on the nest, which Salmansohn said expands each year in the same place. Four other eagles drifted on the wind further south with only a few flaps of their muscular wings. None came close for a more intimate encounter with cameras. Salmansohn’s telescope was best for viewing. Asked in jest if he could offer an eagle mating call to attract them, Salmansohn offered a squeaky-sounding retort. “They don’t sound majestic at all,” he explained.

The group then climbed the marsh trail upward where on the hilltop they could peer south, west and north. Seagull shadows across the ice gave off false sighting hopes. “Ring-billed gulls, common to the area — the adults have a black band around the bill,” said Salmansohn. 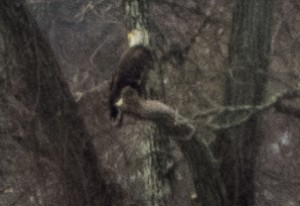 Finally, a close scan of Constitution Island, just over the marsh, hard by the river, revealed an eagle seated in stillness atop a tree. Through the telescope lens, the solitary bird appeared as fierce and proud as its image in the culture. Rooted on the treetop it offered only proof of the eagle’s propensity toward rest and watchfulness during the winter hiatus. There would be no pair of eagles, talons entwined, falling through the air in the mating ritual Salmansohn could only attempt to conjure for his audience’s collective imagination.

As the weather warms, eagles in the valley will wind their way north to their other homes, traveling as far as a thousand miles. There they will celebrate spring, taking turns feeding their young. Within 12 weeks, eaglets become adolescents beginning to fly solo but still coming home to the nest for meals. A couple of months more they strike out on their own, establishing new spheres of influence for themselves. “They are highly territorial creatures, said Salmansohn.

And they are elusive, at least on given days. Efforts to find a usable picture for The Paper from among the photographers (including this reporter) proved fruitless. But the memory of the birds seen through the looking glass lingers.

One thought on “An Eagle Walk on a Winter’s Morn”