Though she hasn’t, until recently, cooked for a living, Heewon Marshall has always cooked. She cooked while she was a theater actress in her native South Korea; she came home and cooked after busy days spent working as a sales executive in the insurance industry during the 20 years she lived in Japan. And now, she has brought her cooking skills to Beacon, serving up homestyle Korean food at Seoul Kitchen, the small eat-in, takeout establishment she opened about a year and a half ago on the eastern end of Main Street in Beacon. 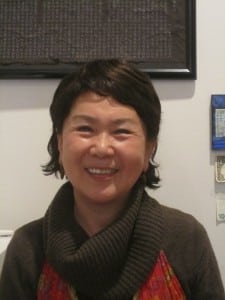 If finding Korean home cooking in Beacon is unexpected, this reflects the zigzagging paths of Marshall’s life story overall. The youngest of five siblings, she grew up “a city girl” in Seoul and trained in “traditional Korean drama,” which she describes as a mixture of Western theater “like O’Neill” as well as Korean stories told theatrically.

Her first marriage brought her to Japan, where she left the theater behind and turned into an astute life insurance saleswoman, using the people skills she employs today in her business. A novice in the insurance field at first, she succeeded, she said, through “doing what they wanted. I started from zero, but I like people, like to work, and I just learned.”

Wanting a big change in her life, Marshall made a bold move, leaving a successful, six-figure income behind her in Japan to come to America and reinvent herself, surprising her family. “I had a big income, but no life. People were surprised I came by myself,” she said.

But the meaning of her first name, Heewon, isn’t “optimistic woman” for nothing. She calculated that in the five years it would take her to qualify for a large pension in Japan, that same timeframe spent in the U.S. would give her the English language skills to progress, career-wise, in a different way.

Landing first in Colorado, where she had family members, her ambitions were to learn English and continue with her career in the insurance industry. She soon found that things worked very differently in the States. Finding Colorado a little dull, she upped and moved again, this time to New York City, which she immediately loved. “I walked around, saw a lot of theater, traveled, studied English.” 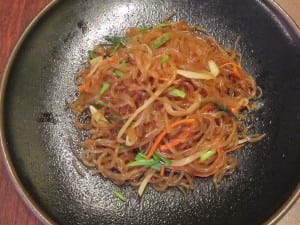 One day, a classmate recommended taking a day’s trip on Metro-North, seeing the Hudson scenery. On the train, Marshall met the man who would become her husband, Doug, whose family has a background in the restaurant business. After marriage, she began her search for a job.

The insurance field was quite different here, however, and Marshall found it more difficult to break into than she had anticipated. “The American way is totally different. Interviews, for example, are different. In Asia, [one is supposed to be] always quiet. Here you are supposed to do PR for yourself and present positively. The initial interviews didn’t go well. I believed in my ability and experience, but it was difficult. So I thought, ‘What else could I do?’”

Considering her husband’s positive reactions to the food she cooked for them, she used that as motivation to start anew. “I realized I could start a food business.” Together they searched far and wide, on both sides of the lower Hudson, for the right place. “It took time,” she said. “Many places were too big; we knew we had to find a small place.” They finally found one, but it was minus a crucial component: a kitchen. So, in keeping with her adventurous spirit, they simply put one in, despite having no prior experience doing so.

Marshall considers Seoul Kitchen, with its small front space holding just a few tables, a refrigerated set of shelves with takeout kimchi and Korean beverages among other items, and a steam-table buffet, “my beginning.” She knew that with constraints of budget and space, she couldn’t hire a lot of employees, hence the buffet-style for now. Eventually she hopes to have a much larger restaurant, with farmhouse-style seating at big tables. 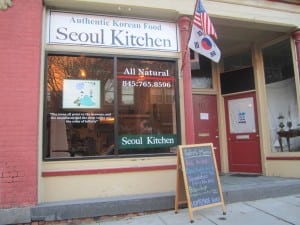 Her clientele is a mixture of locals and visitors, many from New York City who are quite familiar with Korean food, and others who “don’t know it yet. But people who come here, come back,” said Marshall, adding, “That’s my encouragement.”

Generally there are about six different dishes available on the buffet table, and several additional specials, which rotate, cooked to order. Most popular are bibimbap, described on the menu as “six vegetables over rice with fermented red pepper sauce”; chapchae, which are sweet potato noodles; kimchi mandoo (Korean dumplings); and soonduboo, a soup-like spicy tofu pot. There are always plenty of vegetarian offerings.

Food is central to South Korean culture and daily life, said Marshall. Instead of the standard greeting of “How are you?” people there say, “Did you have lunch?” or something similar, depending on the time of day. Marshall calls Korean food healthy and natural; her menu describes Seoul Kitchen’s food as “authentic rustic … using all-natural ingredients,” and the Korean flag flying outside, side by side with an American flag, is emblematic of her motto: “Be Proud of Your Country’s Food.”