Gallery 66 NY is pleased to announce Figuratively Speaking, the March exhibition of the works of Donald Alter of Newburgh featuring his creative vision of the human form. Artists Sarah Haviland and Giselle Behrens will also be showing in Gallery 2.

The Bronx-born Alter, who will celebrate his 83rd birthday this year, is the last remaining graduate of the rural North Carolina school that served as a combination mecca and artistic trailblazer for a generation of American artists. Founded in 1933 by the controversial scholar John A. Rice, Black Mountain College took up the mantle that was dropped by the closing of the Bauhaus School in Germany, under the increasingly powerful Nazi regime.

Just as his media run the gamut from oil to acrylic, from watercolor to weaving, Alter’s themes defy categorization and range from abstract landscapes to almost Chagall-like depictions of people and animals. Alter recently eschewed the use of canvas, preferring to paint his figures on the Styles section of the Sunday New York Times.

In addition to reflecting basic natural forms of trees, birds, plants in her art, sculptor Haviland’s work is rich in its elegant representations of women. Her work investigates mythology, images of women and the implications of mirrors. Haviland uses diverse media from cement and clay, to wire mesh and mirrors, and responds to specific settings or states of mind. On exhibit will be two wire-mesh female winged figures, floating in the air and spanning 8 feet. 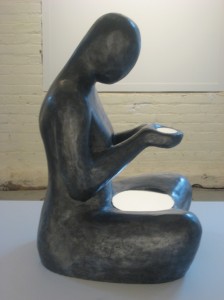 Behrens has established her career as a fine arts photographer, specializing in digitally enhancing and painting her images. The native Venezuelan first took up film photography 14 years ago, using the works of Ansel Adams as both her inspiration and her personal classroom. When digital photography emerged as a viable new format, Behrens adopted it and has focused primarily on fashion and the female form.