The Sunset Reading Series celebrates its fifth anniversary with a fundraising party at Cathryn’s Tuscan Grill on Friday, March 1, 8 p.m. The series has brought authors, poets and musicians to the Chapel of Our Lady Restoration for free Sunday afternoon performances that have captivated a growing audience of local regulars and tourists alike. 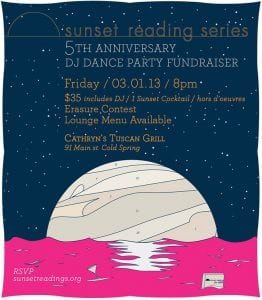 From Mary Gaitskill to Tom Lux, Aimee Bender to Valerie Martin, and Sam Lipsyte to Marie Howe, the series has attracted major writers who are known for dynamic delivery of their work. The last event of the 2012 season had an overflow crowd mesmerized by local poet Jeffrey McDaniel and singer/musician Joan as Policewoman. This year promises to be a stellar one with E.L. Doctorow, one of the greatest American novelists, kicking off the season on May 5.

The series is made possible, in part, with public funds from the New York State Council on the Arts Decentralization Program. In Putnam County the Decentralization Program is administered by the Putnam Arts Council. Unfortunately, the 2013 grant for the Sunset Reading Series was cut in half due to state budget cuts. The series will be unable to fund four to five readings per year without more support from the private donors. All are invited to join them on March 1 for a night of cocktails and dancing to support and celebrate the reading series that has become a cultural necessity.

Tickets for the fundraiser are $35, which includes dancing, one sunset cocktail and hors d’oeuvres. Go to sunsetreadings.org to RSVP or for more information on the party and how to donate.