With a looming federal deadline and lingering memories of Hurricane Sandy’s devastation, the Cold Spring Village Board Tuesday night (Feb. 26) adopted a new zoning law that expands and clarifies the rules for construction in flood-prone areas.

On a 4-to-0 vote, the board scrapped the prior floodplain section of the Village Code and replaced it with a new Chapter 52 Floodplain Management law, ensuring that Cold Spring continues to qualify for FEMA (formally, the Federal Emergency Management Agency) support in disasters and that residents remain eligible for FEMA’s National Flood Insurance Program. Trustees Bruce Campbell, Ralph Falloon and Matt Francisco joined Mayor Seth Gallagher in adopting the law, following a brief public hearing at which no residents or other stakeholders opposed the move. The board’s action coincides with issuance of new flood-zone maps from FEMA. To meet FEMA requirements, the board had to update Cold Spring’s law by March 4, the date the new maps become official. 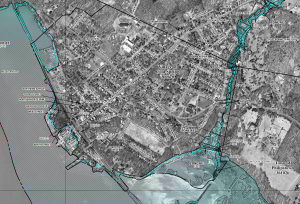 The map for Cold Spring designates much of the riverfront and nearby streets as well as much of Dockside Park and West Point Foundry Preserve as Zone AE, an area for which base flood elevation determinations exist. The law defines a “base flood,” also called a “100-year flood,” as one “having a 1 percent chance of being equaled or exceeded in any given year.” Correspondingly, an “area of special hazard” is “the base floodplain or 100-year-floodplain.” Zone AE applies not only to the Hudson River neighborhoods but to the Foundry Brook valley in Cold Spring, extending upstream along Foundry Brook into Nelsonville. However, Zone AE zone does not cover the villages’ smaller creek, Back Brook, which generally does not turn into a torrent of whitewater in storms.

The law covers “new development, including new and substantially improved structures in the areas of special flood hazard” mapped by FEMA. It states that  “development” means “any manmade change to improved or unimproved real estate, including but not limited to buildings or other structures,” as well as to filling, paving and storage of equipment. It defines “substantial improvement” as “any reconstruction, rehabilitation, addition, or other improvement of a structure [whose] cost equals or exceeds 50 percent of the market value of the structure before the start of construction.”

Based on model legislation provided by the New York State Department of Environmental Conservation, Cold Spring’s new law adapts and updates the previous village version, dating from 1988, and in some cases adds new provisions or explanations.

According to the mayor, the new law will not affect owners currently repairing their properties near the riverfront after last fall’s hurricane. “They’re allowed to rebuild their house” as is and “their rebuilding is covered” by the 1988 law, in force at the time of the hurricane, Gallagher said. The storm flooded the area below the railroad tracks, damaging homes and businesses. Flooding also occurred with Hurricane Irene in 2011 and in other storms in recent decades.

Among other changes, the 2013 law puts a timeframe on the beginning of construction or repair, reconstruction or rehabilitation, after the owner obtains a permit. Work now must commence within 180 days, or six months, of the issuance of the permit. 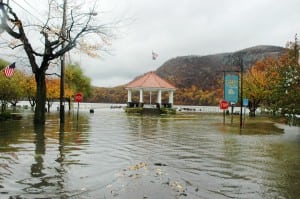 Under basic standards, the law states, as the previous version did, that electrical equipment, heating, ventilating, air conditioning, plumbing connections and similar elements keep water from entering and accumulating within their parts during a flood. But the 2013 law adds that these systems also should resist hydrostatic and hydrodynamic loads and stresses and says that to prevent water damage utilities might be located “at least two feet above the base flood elevation.”

Again as in the previous text, the new law states that “new and replacement sanitary sewage systems shall be designed to minimize or eliminate infiltration of flood waters.” Unlike the previous text, it goes on to mandate that “sanitary sewer and storm drainage systems for buildings that have openings below the base flood elevation shall be provided with automatic backflow valves or other automatic backflow devices.”

The new law also takes more note of historic structures, such as those listed individually on the National Register of Historic Places, the New York state equivalent, or “on a local inventory of historic places.” It provides that “variances may be issued for the repair or rehabilitation of historic structures upon determination that: (1) the proposed repair or rehabilitation will not preclude the structure’s continued designation as a ‘historic structure’; and (2) the variance is the minimum necessary to preserve the historic character and design of the structure.” Before, rather more ambiguously, the code said that “variances may be issued for the reconstruction, rehabilitation or restoration of structures and contributing structures listed on the National Register of Historic Places or the State Inventory of Historic Places, without regard to the contributing structures procedures set forth” elsewhere.

The 2013 law’s opening section announces the village’s intent “to promote the public health, safety, and general welfare, and minimize public and private losses due to flood conditions in specific areas.” It says the resulting provisions “regulate uses dangerous to health, safety, and property due to water or erosion hazards;” ensure protection of buildings “against flood damage at the time of initial construction;” and “control the alteration of natural floodplains, stream channels, and natural protective barriers” that contain flooding.