With an eye towards making the Putnam History Museum (PHM) a more intrinsic part of the community and a true local cultural institution beyond ‘a building,’ the museum’s recently appointed director of administration, John Duncan, has initiated a reading and discussion group. Duncan describes the intent of the program as going beyond just the book itself, which he calls “just a vehicle” to explore, through conversation between people in the community, its relevance to today and how that may or may not have been shaped by the “history” described in the book. Duncan and PHM Board Member Robbi Smith, an attorney and law school professor, expanded upon all this at the group’s first meeting earlier this week. 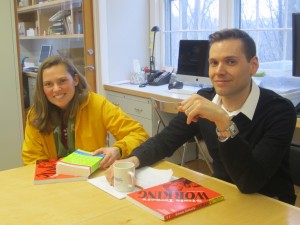 Robbi Smith and John Duncan at the Putnam History Museum’s introductory reading and discussion group
Photo by A. Rooney

The springboard for the discussion group deals with recent history — Duncan choosing a graphic novel adaptation of the 1974 compilation of oral histories, Studs Terkel’s Working, adapted by Harvey Pekar. The original book chronicled the lives and attitudes of America’s (largely blue-collar) workforce via a series of personal accounts and interviews. This new adaptation streamlines the number of stories told but presents each in its entirety, verbatim.

The comic-style layout and illustrations in this version of the book provide for a more contemporary presentation of a not-so-long-ago period that nonetheless has seen some galvanizing changes in the workplace: obviously the transition from “tangible” to “virtual” jobs, but also more subjective shifts — people’s fulfillment from work, changing loyalties to and from employer to employee, the line separating work from non-work time, to name a few. These topics provided much of the fodder for this first discussion, as did the notion of the information being conveyed via a graphic novel.

Smith described herself as “having a reluctance going in. I had to decipher it, but it went quickly once I got into it, and I wound up enjoying it.” Duncan posited a larger-issue question: “Should we be “reading into things that people were different at one point in time or another, or have people always been the same?”

The PHM had a number of copies of this first book available for loan to interested readers (and they can still be borrowed, as the theme will continue). Envisioned as a multipart series, the umbrella concept is to focus on the historical evolution of work. Plans are for later meetings to discuss The Rise of the Creative Class: And How It’s Transforming Work, Leisure, Community, and Everyday Life, by Richard Florida, and Vital Ideas: Work, edited by Christina Boufis and Duncan. The group is also very open to participants’ suggestions of other texts.

At present, the meeting time has been set for Tuesdays at 1 p.m. after consultations with a number of interested people seemed to indicate that worked for them, but Duncan said this is flexible. For those unable to meet during the day, he could foresee adding a second meeting time during the evening hours. Both Smith and Duncan emphasized the casual, unintimidating nature of the group, and that one needn’t even feel obliged to read the text to come in and participate in the discussion.

The notion of starting this group, said Duncan, stemmed from his desire to begin, on the PHM’s behalf, “real conversations with people in town. How can we create a venue to discuss things that matter here, beyond light conversation? People have things to say, just not the venue for it. They may be surprised that these things matter to other people in town. The museum wants to become a more active part of the community. The more people know us and we them, it’s beneficial to both of us. Many people here have an interest in history, but we don’t know what we can provide them with until they come in and tell us. My ideal goal is to promote ‘conversations on the street’ through this club at the museum, where we can talk about our concerns.”

Smith added: “We can sit in here and install what we think is relevant, offer lectures, etc., but the museum needs feedback, and this can be a forum for that. It’s meant to be a pleasurable, casual exchange. Also, because this particular geographic region is so deep in history, sometimes we lock it into that box, and it is great to tie it into today as well.”

The next meeting is scheduled for April 2. To receive emails about upcoming meetings, or if you have any questions or would like to borrow a copy of Working, contact John Duncan at [email protected] or 845-265-4010.