One of a series of road projects to affect drivers

Planned New York State Department of Transportation repair of the historic wall along St. Philip’s Church on Route 9D in Garrison joins a growing list of projects with the potential to disrupt traffic this summer. 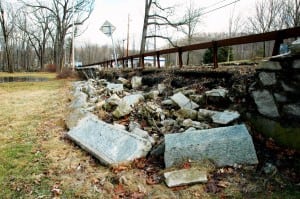 A stretch of wall tumbles into the yard at St. Philip’s church. Photo by L.S. Armstrong

The church announced on Monday, Feb. 25, that the state would fix the partially crumbling wall. According to church officers, the section of Route 9D running past St. Philip’s will be restricted to one lane during the work. A church representative, Anita Prentice, said Tuesday that the effort would begin after classes at the Garrison Union Free School close for the year, on June 21, and is expected to finish by Sept. 1.  The Garrison school is located across the road from the church property.

The deteriorating wall drew the attention of Garrison school officials last fall and GUFS Superintendent Gloria Colucci told the School Board in December that she would meet with state officials that month to discuss the matter.

On the further north side of the church entrance drive, a stretch of wall estimated at 50-60 feet has tumbled down into the church yard. A smaller break occurs on the north just past the drive.

This week’s news of the wall project followed reports at the Philipstown Town Board meeting earlier this month of other road improvements expected to affect drivers this summer. At the board meeting, Councilor John Van Tassel told his colleagues that the DOT intended to undertake major work on the Taconic State Parkway, with the likely result that traffic diverted from the Taconic would use Route 9 through Philipstown instead. Supervisor Richard Shea then observed that further work on Snake Hill Road in Garrison, which links Routes 9 and 9D, also was scheduled for summer and would probably close Snake Hill Road for about two months.

Van Tassel, who serves as a Town Board liaison to other agencies on transportation issues, said Tuesday night that the Taconic work was supposed to start in August and end before school resumes in the fall. Until alerted this week, he had not known about the Route 9D project on St. Philip’s wall. He spoke with the state on Wednesday and later said that because of possible local concerns, the DOT would check the schedule and inform the town government accordingly. 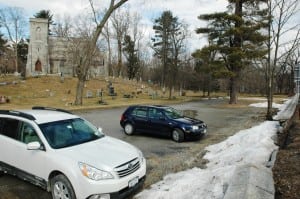 A gap forms where the wall collapsed into the St. Philip’s parking area; it’s one of at least 2 sections of wall that have deteriorated. Photo by L.S. Armstrong

After further communication with the DOT, Van Tassel said Thursday evening that the state had confirmed that the projects would overlap. “They don’t feel that any problems should occur but the patterns will be monitored closely,” Van Tassel told Philipstown.info. He said that for the Taconic work, the DOT intends to close one lane southbound, “with real-time traffic alerts at key points well north of the area – I-84 for an example. The Garrison 9D project will have alternating one-lane traffic using the signal at the Garrison School and a ‘temp’ signal at Nelson Lane.”

Meanwhile, the old wall stood in stalwart gray silence, oblivious of pending efforts on its behalf.

“The stone wall was a personal offering from Gov. Hamilton Fish in 1883 when this was a quiet country lane,” the Rev. Frank Geer, St. Philip’s rector, told his congregation at the parish’s annual meeting on Sunday. “It was never intended to serve as a retaining wall to a busy state highway.”

The wall’s donor, Hamilton Fish, one of various family members to bear the name through several generations, lived in Garrison — when he wasn’t in Albany or Washington, immersed in national and state politics. He served as a governor of New York, U.S. senator and U.S. Secretary of State and over the years opposed the extension of slavery to land acquired during the 1840s war with Mexico, advocated the creation of free public educational institutions in New York state, helped prevent a war with Spain over Cuban independence in the 1870s, and gained a reputation for sound advice and conduct during the trouble-prone administration of President Ulysses S. Grant. A lawyer by profession, born in New York City in 1808, he also served on the vestry (parish council) of St. Philip’s and died at age 85 in Garrison.