Members of Haldane’s advisory Health and Safety Committee (HSC), together with Superintendent Mark Villanti, the principals, director of facilities and the school’s outside safety auditor gathered together on Wednesday night (Feb. 27) to present an overview of current and past school safety measures, some implemented, some recommended, in a PTA-sponsored interactive presentation open to parents and the public.

Calling the subject of safety “critical and anxiety-producing” for parents, PTA President Laura Danilov stressed how “important it is for parents to be in partnership with the administration.”

Haldane’s HSC is an advisory committee created by the Board of Education and consisting of a mix of parents — including many law enforcement and/or security professionals — Haldane staff, and a board member. They are charged to:

HSC co-chair Bob Ferris (along with Tom Cunningham), who is a criminal investigator with the county sheriff’s department, spoke first, mentioning his eight years on the HSC. He said there was now “a real need to get up to speed, even though this is a small town,” saying the process was a matter of “reviewing, upgrading, finding weaknesses.” He stressed the importance of “securing the building with the aim of slowing down any potential intruder and speeding up the arrival of trained emergency services at the building[s].” 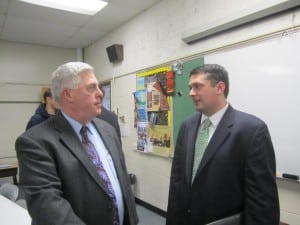 The resumes of some of the other committee members in attendance spoke to the abundance of professional experience in the voluntary committee: former MTA Police Chief of Security Kevin McConville; City of Beacon lead firearms instructor and Patrol Sgt. Kevin Junjulas; former New York Police Department, now Town of Fishkill police Sgt. Jim Spratt, who also works in private security; and Department of Homeland Security Special Agent Chris Shields. All have or had children who attended Haldane.

Shields said he felt it important “to be proactive rather than reactive. I also want the teachers to feel relaxed, the students secure, and other local agencies more involved.”

Elementary/Middle School Assistant Principal Julia Sniffen described the formation of the HSC, in 1999, after Columbine, when “Project Save” legislation was enacted, requiring school districts to have emergency management plans. She said the plan had undergone several revisions, the first large one in response to the Sept. 11 attacks, and now, in response to the recent tragic events, another point of reevaluation.

Elementary/Middle School Principal Brent Harrington got down to some specifics, explaining that “in the wake of Sandy Hook, we took a hard look at protocols, entrances and the significant shift in culture, balancing community feelings with recognizing the need to increase safety.” These changes include a shift in entrances and exits to the school; the positioning of two alternating “greeters” at the only entrance; the locking of doors earlier in the day, the evaluation of each door and each lock, and other measures.

Harrington also stressed a change in “the practice and culture of all classrooms. Now all doors are locked when closed, though the doors can remain open at the teachers’ discretion; when they are shut, they are locked.” Harrington also referred favorably to the Cold Spring Police presence on campus during arrival and dismissal times.

High School Principal Brian Alm spoke next, mentioning the school’s lockdown drill, which had taken place the day before, calling it successful in most aspects. He described rehearsing that drill and another “more intense” safety drill that takes place every two years to ensure that new staff receives timely training.

An evacuation plan is in place, taking into account those high school students who leave the campus for lunch. There is now a text-alert system in place, which would immediately get the word out to all students to stay away from campus in the event of any incident.

Later in the discussion, in response to a question from a parent, the committee decided to test the text-alert system in the form of an occasion drill. In addition to enhancements in the identification system, key and swipe-card controls, which Alm called “much more meticulous now,” he called the “relationship with our students” the “biggest preventative measure. The addition of a school social worker two years ago is a tremendous asset.”

Director of Facilities Mike Twardy further defined some of the new measures already implemented, including making sure all closets, mechanical and electrical rooms remain locked at all times; the changing of locks; the use of a swipe-card system, which he said aids greatly in determining who is coming and going; and the addition of numerous cameras. He broke things down into immediate and future goals, the future being contingent, of course, upon securing the funding needed, not an easy proposition nowadays.

On his wish list are better video monitoring systems, programmable doors and more cameras. Considering limited funding, he is looking to integrate more systems among all buildings on the campus and is, at all times, using a multiple bid system.

Villanti said the HSC was “helping us develop a balancing point where we are as safe and secure as possible, while not making this environment different from the current culture.” To further that, the school has just concluded a safety audit. Director of MSA Security Matt Dimmick, who has extensive background in both military and private security, served as the auditor. Dimmick said he first looked at the facility “from the perimeter out,” seeking a “layer of defense. How do we detect threats? Through the social workers, interactions with students, looking for odd behaviors, monitoring of Internet threats.”  He then proceeded to “the building envelope, beginning with the façade: ‘How do I get in?’”

Dimmick provided more details on changes made to doors, entranceways, methods of ingress and egress, intercom systems, classroom doors (down to things as basic as hinges), etc., saying the ultimate goal was to set these things in place while still making “parents comfortable, children comfortable and having a place where education can happen — none of this should impinge on a child’s ability to learn.” All methods of entry, including windows, tunnels and rooftops were looked into.

Shifting his remarks towards “active shooter response,” Dimmick described the three possibilities as “run, hide, fight” and spoke of a room-by-room examination and teacher training on hiding and exiting. He called the “sheltering areas” [of each room] “large enough for the whole school population.” Teachers receive training via a safety plan gone over at faculty meetings.

Saying that shooters “have many common statistics, but no real profile,” he again reiterated the need to hopefully deter and use all delaying tactics possible to allow for a law enforcement response, and also to have things set up systematically but not necessarily revealed to the public, for security’s sake. Dimmick said, “In a real crisis, things don’t follow a plan, because people will be scared,” nonetheless things like a designated site for all on campus to head to, and ways of alerting parents not to descend on the buildings en masse, can better be facilitated.

Questions from the parents in attendance followed, on topics ranging from the value of having a school resource officer (as in the past), who would be funded 50/50 by the school and county, to the fine line between making children fearful and having them prepared, to putting up a proposition vote to the community to pay for further security enhancements — something Villanti seemed to think was inevitable in “taking the school to the next level” of protection.