Stephanie Hawkins is a self-described roll-up-your-sleeves “doer.” Her civic resume appears to bear out her principal reason for voting for her in the upcoming March 19 election for Cold Spring Village trustee. More than six years after first moving to the village, she “absolutely loves” Cold Spring. Hawkins, who by day is in children’s book publishing in New York City, has done a lot. She has served on the town Recreation Committee and the board of the Depot Theatre, and she is a founding member of the Cold Spring Film Society, which sponsors popular open-air screenings along the riverfront at Dockside. 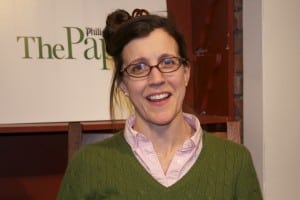 And as if such a range of cultural activities might not be enough to qualify for the weightier policy matters confronting the village, Hawkins lays claim to a couple of years (and no doubt a few hundred hours) of meetings as a member of the Special Board for the Comprehensive Plan/Local Waterfront Revitalization Plan. Whatever one’s views of the tongue-twistingly named board and its recommendations, the work involves a miner’s journey into the detailed depths of village history, topography and economy.

“I find the work gratifying. I really like to move initiatives forward that I believe are good for the village,” said Hawkins in an interview with The Paper. “The Village Board offers another opportunity to serve that feels good,” she said.

Asked for a sense of her agenda if elected trustee — there are three people contesting two open seats — Hawkins divides her main concerns into three categories: zoning, better community relations and planning for the future.

Amending the zoning code to protect Cold Spring’s “unique, special, particular character from formula businesses,” which she defines as regional and national chains, is a Hawkins priority. The issue of village character is not, said Hawkins, a relative newcomer’s projection onto the landscape. “I have spoken to families who have lived here a long time, and they recognize this as an important issue worth protecting,” she said. “I think the issue is also about protecting and promoting existing businesses,” she added.

Hawkins also wants to take on the larger task of marrying the entire adopted Comprehensive Plan to the Village Code. “The Village Board should take a leadership role in deliberately and carefully stepping through the Comp Plan, examining the recommendations and see what has to be changed in the code.”

On the controversial Butterfield development plan, Hawkins, a vocal critic of some aspects of both the plan and the village process, is nevertheless sanguine about its prospects. “It’s a project that has broad community support,” she said. “I have every confidence that the village and the developer can reach common ground on which the developer’s needs are met, and the village is protected from an unprecedented amount of retail space at its southern boundary.”

Generally Hawkins also wants to establish better relations with residents to improve dialogue at meetings to help people give honest feedback. Like many regular observers, she has been disappointed at times with unnecessarily rancorous discourse at meetings, which she believes she can help dampen through discussion.

More specifically, Hawkins would work to improve trustee relations with the volunteer boards and organizations serving the village. She mentioned the Cold Spring Fire Company and the Historic District Review Board as prime examples. “The volunteers have to be respected; we have to make sure they have the resources and support they need to do their work. The same is true for village employees for that matter. They are all our neighbors. They should know we are all in this together,” she said.

Careful planning for the future includes infrastructure upgrades, floodplain management and sound financial management, according to Hawkins. “We need to be smart about looking at our water systems,” including drinking water delivery, the wastewater treatment system as well as the reservoirs and dam, she said. “We also have to take care of our roads and sidewalks. The neighborhood west of the railroad tracks needs to be studied to see what can be done to protect it against storm surges with particular attention to the village pump station that is key to handling sewerage, she said.

As to village finances, Hawkins wants to spend money where it is really needed with even greater transparency so taxpayers see where it is going. She would further restrain the capacity for individuals (namely the mayor) to authorize expenditures. “No one person should be empowered to spend large amounts of money,” she said.

2 thoughts on “Hawkins Enjoys Getting Involved”