Bruce Campbell shows up, rolls up his sleeves and digs in. As a village trustee, a member of the Haldane School Board or a committed member of local service organizations (Lions, Knights of Columbus), he plays the long game of attention to the details, patience with bureaucracy and consultation with stakeholders. This is how he relates his shoulder-to-the-wheel story as a lifelong village resident and the key reason voters should return him to office. 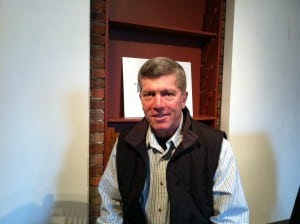 “As a trustee and the deputy mayor appointed by Mayor Gallagher, I have been involved in every part of the day-to-day operations of the village government,” said Campbell, who is finishing a four-year run added to a previous six-year incumbency from 2002-2006. In between, he was elected to the Haldane School Board, so he is no stranger to asking citizens for their votes.

“I have always worked in support of the chain of command,” said Campbell, adding to the sense of duty and effectiveness he wants to convey about his candidacy. Campbell is retired from 36 years’ civilian work, supervised by military officers, at West Point. He specialized in electronic communications work, involving maintenance of on-base radio frequencies as well as television signals and support of tactical training exercises.

Issues that demand constant attention and daily visits to the Village Hall, according to Campbell, include the condition of the water treatment plant, the West Street pump station (which moves water uphill from the waterfront onto Fair Street where it can run over to the treatment plant before being discharged into the river), traffic safety on Main Street (Route 301) and Route 9D, involving crosswalks and lighting, as well as street drainage. These problems in search of solutions are only a partial list of items Campbell asserts he has helped address during his tenure.

He is especially proud of shepherding the Main Street renovation project that has involved years of interaction with the federal Department of Transportation, which first approved funding more than seven years ago. “We are going to see sidewalk repair, new lighting and some drainage upgrades as well as compliance with the Americans with Disabilities Act, with respect to curb cuts and the like,” said Campbell.

Campbell said he views working with Mayor Seth Gallagher on the new docking law, allowing visiting vessels to tie up at the foot of Main Street, as another significant accomplishment. He also includes working with the Hudson Highlands Land Trust on the railing and lighting improvements at the dock. “Making improvements and opening the dock area to boats can mean more tourism for village businesses without all the added traffic,” said Campbell.

One particularly cost-effective, below-the-radar effort Campbell takes pride in involves taking the time to work with the Putnam County Inmate Work Program. Coordinated through the sheriff’s office, the village benefits by having individuals work off their community service time sentences on improvement projects. According to Campbell, the work has included minor carpentry, painting, staining and related tasks that have resulted in upgrades to the bandstand, the benches in the dock area as well as improvements in Mayor’s Park. He said the labor was no cost and the supplies paid for out of fees from use of these spaces for various events.

“As chairman of the Recreation Commission, I also like getting involved in the enjoyable aspects of community life, such as organizing Community Day (on the July 4 weekend), the senior citizens picnic, as well scheduling use of our facilities for weddings, graduations and other events,” said Campbell.

On the vexing Butterfield development controversy, Campbell finds himself looking for a way forward that recognizes the progress he believes has been made on changing the plans based on community input but also acknowledges the concerns raised at the last public hearing. “All the time we have spent on this as trustees, we thought we were getting close with the rezoning proposal. We thought the B4A/R1 would be acceptable to the majority,” said Campbell. “However, I share the same concerns people raised at the hearing,” he continued. “I don’t want to see a strip mall come out of it; nobody wants that. I don’t want my legacy to be something like Fishkill,” he said.

Campbell said he thought it important that the trustees return to the village’s adopted Comprehensive Plan and work toward making the zoning and other code changes that plan envisions.

Campbell references audit, insurance and personnel committee work to underline his familiarity with the nitty-gritty of government function and accountability. He cites the painstaking effort to arrive at a satisfactory agreement with the part-time police force on arbitration and other issues as another notch in the belt of granular governmental success.

“Since I was 18 (which he admits, when asked, was 41 years ago), I have always focused on what would be good for the village through serving in organizations and on boards, taking a leadership role. I am running for re-election now because I want to follow through on the things I have been working on,” he said.