In Indiana when I was growing up, cheesiness was akin to fanciness. At the handful of “classy” restaurants around town, the menus were filled with food drenched in cheese sauces. It didn’t much matter what the underlying ingredients of a particular dish were — seafood, vegetables, meat, even fruit — all were tucked in like good little children beneath big, fat blankets of warm cheddar, mozzarella or muenster. 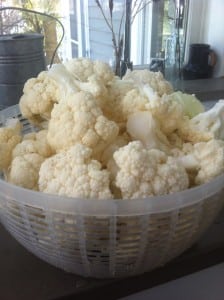 Around the same time, vegetable companies began packaging cheese sauces with their frozen broccoli or cauliflower, in an effort to make their products more popular.

At home, I occasionally tried applying this rule to my own suppers, using cheese whenever I needed to upgrade the flavor of a disliked food. Sautéed calf’s liver à la cottage cheese was one such concoction — though not, I might add, a happy one.

During high school, my appreciation for the power of cheese deepened. This was the Moosewood era, when a generation of hippie cooks decided that the best way to help carnivores get over their infatuation with meat was to throw great gobs of cheese at them. I still have a 1977 edition of the Moosewood Cookbook. Its glossary devotes an entire three-column page to cheesy dishes, including Arabian Squash-Cheese Casserole, Bulgarian Peppers and Cheese, Cheese-Rice Strudel, Cheese-Beans, and Ricotta Cake.

By the time I graduated from college, I had also graduated from cheese-laden dishes. For many years afterwards, I avoided cooking foods containing cheese (with certain exceptions, of course — lasagna, omelets, tortilla pie and macaroni and cheese among them). It never occurred to me to wonder why.

Meanwhile, I came to adore cheese. These days, I like it so much that I am never terribly disappointed when I miss my train out of Grand Central as long as I can spend the time ogling the multitude of options at Murray’s Cheese. Here at our own farmers market, I have grown besotted with the selections from the Amazing Real-Live Cheese Company, which, week after week, I have a very hard time resisting. And if I had to pick an all-time favorite meal, it would probably be a glass of red wine and a selection of cheeses, with a little fresh and dried fruit and perhaps some sort of pickle on the side. 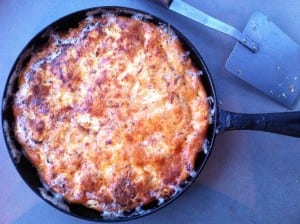 But now that I have taken a moment to think about it, it occurs to me that my avoidance of cheesy foods is probably linked to a childhood sense that, in cooking, cheese acts as a culinary con artist, its primary purpose to trick a person into believing a food is something it’s not: fancy or hearty or tasty. Cheese on its own is fine; grated parmesan on top of Italian dishes is finer than fine. But a cheddar-cheese-drenched vegetable dish is a scam. Or so I thought.

Then along came Yotam Ottolenghi. In case you haven’t heard of him, he’s the chef of a very hot London restaurant and the author of two of the most influential (at least among my foodie friends) cookbooks to be published in recent years. His recipes are miraculous. I keep realizing in the middle of dinner parties that I’m tucking into something I saw on page 36 of Plenty, or on page 184 of Jerusalem.

It was on page 96 of Plenty that I first spied the dish that would end my cheese embargo. Smoky frittata is its name, and although I mistrust smoked cheeses even more than their plain comrades, this recipe called out to me. I’m glad it did. I made one the other day, and as my husband, a lifelong cauliflower-hater, took a bite, he declared that here at last was a dish that could make him like cauliflower.

Wouldn’t you know it? No sooner do I invite cheese back into my cooking then that old swindler pulls a fast one again. Only this time, I was in on the take.

Friends, I am once again required to take a hiatus from this column for a few weeks, due to some complications with my right arm. The excellent Joe Dizney will be filling in during the interim. Meanwhile, eat well and try and remember to say grace first.