Town residents among those signing

Along with a number of fellow citizens across Putnam County, some Philipstown residents have signed an online petition that objects to the Putnam County Legislature’s call for repeal of New York state’s new gun-control law. 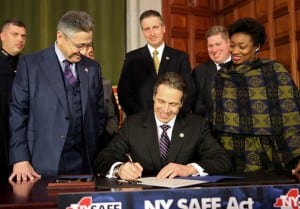 In January, the New York State Legislature passed NY SAFE, after the mid-December massacre of 20 school children and six faculty members in Con­necticut and the murders in upstate New York of two firefighters responding to a blaze. Signed by Gov. Andrew Cuomo on Jan. 16, the law bans new semi-automatic assault rifles, handguns and shotguns (assault guns owned before the law’s enactment remain legal but must be registered); decreases the size of legal high-capacity ammunition magazines; demands recertification of handgun and assault-weapon owners every five years, at the county level; initiates mental-health related rules, including cross-checking lists of the mentally unstable against gun registrations; and otherwise attempts to reduce gun mayhem.

On Feb. 6, the Putnam County Legislature in Carmel claimed NY SAFE “fundamentally alters or abridges the right to keep and bear arms without addressing the problems of gun violence” and urged the state to repeal it and to meanwhile “remove any and all possible unfunded mandates created” by it.

The countywide citizen’s petition, launched Feb. 18, declares that its signers “are deeply disappointed and troubled by the Putnam County Legislature’s stance of opposing the New York SAFE Act. We are concerned about the escalating epidemic of gun violence in our country and support good faith measures, like the New York SAFE Act and President Obama’s initiatives, to curb it.”

The petition can be found online via Signon.org, an offshoot of Moveon.org, a national liberal activist group.

Nonetheless, Dubroff eschews the “activist” label. “In fact many people would call me an introvert,” she told Philipstown.info on Monday afternoon (March 4). “I have never done anything like this before. I am a stay-at-home mom of a 2- and 5-year-old who was rocked to her core by the massacre in Newtown. There is ‘before Newtown’ for me. And now.” She added that she had recently become co-head of the Hudson Valley Chapter of Moms Demand Action, an organization of mothers and others “who want action on common-sense gun laws.”

In petitioning the County Legislature, “I am trying to ensure that our elected officials hear the silent majority in this county,” she explained. “The latest polls show that 65 percent of New Yorkers support the NY SAFE act. However, those who oppose the act are extremely vocal and vehement about their positions, especially the leadership of certain lobbying groups.”

To counteract their influence, she wants “to ensure that the voices of the Putnam County moms, dads, aunts, uncles, sisters, brothers, grandparents and friends who believe in the NY SAFE act are heard loudly and clearly as well. We are the majority, and we need to shout our support of the NY SAFE act from our rooftops so that our legislators hear us. And then we need to remind them that we vote.”

Dubroff plans to present the petition to the County Legislature in April.

As of 9 p.m. Monday, 431 people had signed the petition, among them 162 from Philipstown. They included at least two elected officials: Town Board Member Nancy Montgomery and Nelsonville Trustee Anthony D. Merante. The name Alan Steiner also appears on the petition, although whether the signer is the Philipstown Justice Court judge could not be immediately determined. Altogether, the Philipstown contingent represents about 38 percent of petition signers.

Some, including Merante, left comments along with their names.

Citing the Constitution and Declaration of Independence

“The County Legislature’s stance is irresponsible and unfounded,” James Hartford, a Cold Spring resident, architect and father, wrote. “Will they be at the school violence workshop at the school tonight [Feb. 27]? Will they be able to look us in the eyes when the next tragedy happens — possibly even closer to home than Newtown? How dare they put lobbyists ahead of the safety of our children and our communities?”

“We are not troubled by our neighbors who hunt, but do not support the sale of automatic weapons and large-capacity magazines,” Frances Hodes, of Cold Spring, said on the petition.

“My husband and I strongly support New York SAFE Act and are very troubled by your position,” Sue Willis, of Garrison, informed the county legislators.

In signing the petition, at least three local residents referred to the U.S. Constitution and its Second Amendment, part of the Bill of Rights. The amendment, in its entirety, states: “A well-regulated militia, being necessary to the security of a free state, the right of the people to keep and bear arms, shall not be infringed.”

“A well-regulated militia is not what we have now,” Garrison resident Marion Dugan asserted. “We have thousands of unnecessary deaths — many children.”

“All I hear from you gun people is your 2nd Amendment rights,” said Merante, who not only cited the Constitution but quoted from the Declaration of Independence. “How about my rights of ‘life, liberty and the pursuit of happiness?’ Your rights do not supersede my grandchildren’s rights to safe streets and schools. Wake up and realize who you are representing.”

“It is unconscionable not to do everything humanly possible to protect our children and all innocent citizens from gun violence,” said Bryan Hickey, of Garrison. “There is no jeopardy here to Constitutional rights, and any pretense to that effect is both shallow and utterly disingenuous. The NRA is not concerned about the Bill of Rights; their true concern is for the ‘bill of sale!’ For the good of the community, please reconsider,” he urged the legislators.

Like Hickey, Robert Polastre of Cold Spring mentioned the National Rifle Association, or NRA. “This is the right thing to do,” Polastre said of the state law. “Our reps need to stop being bullied by the NRA and act sensibly.”

NRA President David Keene addressed a Feb. 28 rally that drew some 5,000 gun-rights advocates to the state Capitol building in Albany to protest the NY SAFE law. According to local news accounts, he claimed the law violates Constitutional rights and promised that the NRA would work to defeat elected officials who back it.