The Putnam County Legislature Wednesday night (March 6) unanimously took a stand against “fracking” pollution, voting to ban the sale of fracking waste, its use on county roads and private land, and its introduction into county or privately-run wastewater treatment plants.

The legislation encourages municipalities to enact their own versions of the law, and legislators and a series of environmental group representatives urged towns and villages — as well as the state of New York — to heed the call.

Fracking, or hydraulic fracturing, extracts fuel from underground rocks through use of fluid, generating waste that, as the county law explains, can contain heavy metals, radioactive material, chemicals and water.

Defining fracking waste as a “natural gas waste,” the law provides that:

“(b) The application of natural gas waste on any county road or privately owned real property located within the County of Putnam is prohibited.”

Under the law, which takes effect in 60 days of the vote, every fracking-waste violation — whether a sale or use on a road — constitutes a separate offense and each can result in a fine of as much as $25,000 and/or up to 30 days in prison. 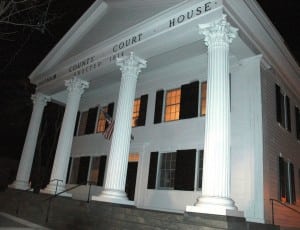 The Putnam County Legislature meets in the historic Old Courthouse in Carmel. Photo by L.S. Armstrong

Consisting of eight Republicans and one Democrat, the legislature passed the law, an addition to the Putnam County Code, with no discussion before the vote, although some members commented later in the evening. They had considered the matter briefly in February but shelved it temporarily and tinkered with the language of the draft. Changes in the second version clarified that the provisions on wastewater treatment plants apply only to county and private facilities and similarly applied the ban on use of fracking waste on roads only to county roads or privately owned property within the county. In the previous draft, the ban applied to use of fracking waste “on any road or real property located within the county” and likewise covered “any” wastewater treatment facility in the county, provisions that seemed to encompass village, town and perhaps state roads and wastewater plants as well.

The Town Boards of Kent and Patterson opposed the county law, at least in its original form, after the legislature proposed it earlier this year. Using identical language, both boards objected that “the proposed law could pre-empt the town’s right to manage its property and affairs free of interference.”

Legislator Ginny Nacerino, who represents Patterson, predicted towns would now accept and adopt the revised text. “We have not infringed upon home rule,” she said.

Westchester County passed a fracking-waste ban and Putnam’s laws adds a new county voice to the ongoing debate in New York state over fracking, a highly controversial practice. Although Putnam County lacks the kind of underground rock formations used in fracking, the possibility of dangerous fracking byproducts in the county has caused concern for months and prompted discussions in Cold Spring and Philipstown. One oft-cited fear is use of fracking-waste “brine” as a road de-icer or dust control treatment. 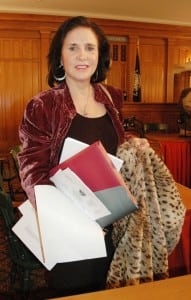 A series of representatives of environmental organizations who addressed the legislature after its vote described a host of hazards associated with fracking waste, including dissemination of carcinogens and radioactive substances; polluted water; and tainted food supplies as the result of road runoff that contaminates fields, crops and livestock. Two said dangerous materials could end up in yards and garages when car tires pick it up and bring it home, further endangering the public.

Paula Clair, who briefed the Philipstown Town Board on fracking issues in 2012 and serves on the Philipstown Zoning Board of Appeals, joined the other anti-fracking advocates in thanking the legislature for its initiative. They expressed concerns about getting towns and the state to enact comparable legislation. Fracking waste “is already being accepted in New York state. No one wants to see our beautiful region affective by this radioactive waste,” Clair told the legislature.

Legislature Chairman Richard Othmer, who represents Kent, urged legislative aides to promptly send copies of the law to other government jurisdictions. “We want to make sure they get this and we strongly encourage them to adopt our law also,” he said. Later, at an impromptu press conference after the meeting, he thanked the environmental groups for their work. “It was a great job by everybody and hopefully the state government will follow” the county example, he said. “It’s a common sense thing. And we had to do it. It’s not a Democratic or Republican issue.”