Volunteers will assess frog and toad populations in local wetlands

The “invitation” from Putnam Highlands Audubon Society read, “Do you like learning about frogs and toads and then spending a few spring evenings searching for places where these gentle amphibians are peeping, croaking and singing?” Many people evidently do, as there was a big turnout for the FrogWatch citizen science training program presented by Dr. Scott Silver at Desmond-Fish Library last Sunday, March 3. The volunteers were trained there to distinguish local frog calls, which they will then listen for in selected wetland areas during the late winter and spring breeding season. 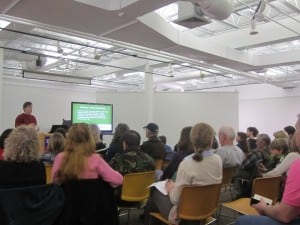 A large crowd of potential citizen scientists attended the FrogWatch training. Photo by A. Rooney

Silver, a biologist and director of the Queens Zoo, which is co-sponsoring this local program, explained what “citizen science” is, then followed with a discussion of amphibians in general and the 12 local species being monitored. He ended with a description of the protocols for the monitoring and data collection in the national program.

Simplified, this entails a series of nighttime visits to nearby wetland spots, armed with an acquired knowledge of the sounds that these 12 different frogs and toads make, then careful listening and notation. At the end of the presentation, participants who wished to be “certified” — which meant that their data would be assessed in a different manner than that of those not certified — were given a test relating to the material covered in the training.

“I’m here to help you guys help us,” Silver said at the start of his talk. “This is a scientifically valid method of data collection.” Silver described citizen science as a “research collaboration between scientists — in this case biologists — and volunteers; it expands the ability to collect data. It would take thousands of hours for one scientist to do, and instead we have thousands of people spending a few hours each doing the same.”

Silver also cited other benefits from participation. “It helps people learn a little about their environment, how to conduct scientific research without putting on a lab coat, and it encourages them to spend time outside with their family.”

FrogWatch USA, spearheaded by the Association of Zoos and Acquariums (AZA), has been in existence for about 15 years and has over 100 local affiliates in all 48 contiguous states, according to Silver. By accumulating data based on “not looking for frogs, but by listening to them,” that data is then used in multiple ways: describing local species’ diversity; detecting rare and invasive species; suggesting shifts in diversity and range over time; serving as an indicator of wetland health; and informing the development of land management strategies.

For those a little murky on their knowledge of amphibians, Silver first gave a broad definition of the class. Amphibians must have gills during one stage of their lives, and they live part of their lives in water, part on land. They appeared on earth 350 million years ago and are one of the oldest vertebrate classes. There are three orders of amphibians: salamanders; frogs and toads; and caecillians (which are worm- or snake-like, live hidden in the ground and are not found in North America). Frogs and toads are important for numerous reasons, as they serve as both predator and prey; are a method of pest control; can be used as food; provide medicinal properties that can be used for medical research; and serve as indicators of wetland health.

Scott Silver describes one of 12 frogs and toads found locally. Photo by A. Rooney

Silver also explained how to differentiate frog from toad. Frogs have smooth and shiny skin; lay eggs in clusters; usually live in or near water; move in leaps and jumps; and have an upper jaw with teeth. Toads, on the other hand, have warts and dry skin; lay eggs in long, spaghetti-like strands; spend more time on land; move in short hops; and have no teeth.

Silver called all amphibians “very sensitive to the environment. Their permeable skin transfers oxygen and moisture but also allows chemicals to enter their bodies, and their life cycle includes time both in water and on land, increasing exposure to all types of pollutants. Therefore negative reactions by amphibians may indicate undetected environmental ills.”

Silver described the worldwide decline in amphibian populations over the past 20 to 30 years and noted that almost one third of amphibian species is threatened with extinction. In the U.S. alone, 38 amphibian species are listed as endangered. Some species in New York state are in rapid decline, probably due, Silver said, to habitat loss; pollution; the introduction of non-native species; climate disruption; parasites; and disease.

The FrogWatch monitoring is done in wetlands, which include marshes, swamps, bogs, fens and vernal pools. Silver advised participants to choose a site “convenient to access weekly; quiet; suitable for data collection in the evening; and legally accessible.” The site “doesn’t have to be a particular size or distance from the road.” Silver had some suggested nearby sites for those not sure where to go. He then detailed the monitoring protocol: “Practice identifying the calls; ensure appropriate weather conditions for monitoring (above 35 degrees Fahrenheit, not too windy, not raining too hard); plan to monitor at least 30 minutes after sunset.”

After advising on how to prepare a monitoring kit, Silver delved into the specifics of what the volunteers would be asked to do. After reaching the site, the first instruction is to “be quiet for two minutes first, then cup your hands around your ears and listen quietly for three minutes. Listen to identify and remember all breeding calls. If you are interrupted, start over. Immediately following the monitoring enter your start/stop times, list all species heard and rate their calling intensity; if you are uncertain, don’t report it. If no calls are heard, enter that. Good data documents both the presence and absence of breeding calls.”

Silver then showed projections of the 12 species of toads and frogs found in this area and accompanied each image with an audio recording of the sound each made. Written descriptions of these sounds included “like a loose banjo string” (and it was); raspy quack; throaty croak; guttural snore; ascending whistle with a short trill; and plaintive descending. Volunteers are to assess the calling intensity of each on a scale of 0 to 3. A “1” means individuals can be counted and there is space between calls, “2” indicates calls of individuals can be distinguished, but there is some overlapping of calls, while “3” is a full chorus, with constant, continuous and overlapping calls.

The sounds were played through again before the audience was given the test, for which they needed to score an 80 percent or better to become “certified.” Far more detailed documentation and data collection forms were to be emailed to all participants. With a timeframe running from now through October (until the first frost), Silver emphasized, “Whatever anyone wants to do is OK. Although it says two times a week, whenever you can do it, if it’s less than that, it’s fine, because that’s more information than what they would have otherwise.”

It is still possible to participate. There may be another training session, or, if not, one can participate without being officially certified. All of the material can be emailed to anyone interested; contact [email protected] For more information on FrogWatch USA, visit aza.org/frogwatch.

On a separate note, Putnam Highlands Audubon will present a free program on how to identify hawks, owls and eagles on Sunday, March 10, at 3 p.m. at Desmond-Fish Library. For more information, visit putnamhighlandsaudubon.org.