In his boyhood home in the Alsace region of France, Pascal Graff grew up on genuine hospitality and restaurant life.

“I was born in the restaurant,” Graff said. “I didn’t choose it. It’s in my family. My brother is a pastry chef in Germany, another brother is a chef in Switzerland, all my brothers. In Alsace, it’s the best food in France.” 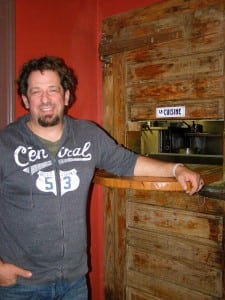 Forever French, Graff loves sourcing local food in the verdant Hudson Valley, but for distinct ingredients, this native of France simply cannot compromise when it comes to stocking the kitchen at Brasserie Le Bouchon, his Cold Spring restaurant. Offering a menu of classic and comfortable French fare, Graff wants guests at Le Bouchon to experience a relaxed atmosphere, good food and the joy that comes from breaking bread unhurried. And when it comes to bread, vegetables, meat and other essential staples for his unpretentious culinary team, Graff aims to maintain authenticity using a combination of products from France and North America.

“To be truly authentic, you need to be very expensive,” Graff said. “When it’s authentic, you have to order everything from France. We try to be as authentic as possible, but money is always an issue, and we don’t want to be too expensive.”

As for high-volume use of traditional ingredients like Dijon mustard, cornichons and puff pastry, Graff maintains his allegiance to imported products. When shipments arrive from France, Graff’s primary chef, Francisco Valencia, knows instinctively what their value brings to Le Bouchon’s cuisine. Valencia controls the sauté pans at the local restaurant and turns out country French cooking with ease.

Valencia may not speak with a French accent, but he’s adopted a French cooking style that helps Graff sustain his popular menu at the 36-seat restaurant.

“Francisco has been with me for five years, and he was my shadow,” Graff said. “It takes a lot to be a shadow, but he learned to work like me and he knows what he is doing. We have tried to change a couple of items on the menu, but the customers don’t want to change. So we put our creative minds into our specials.” 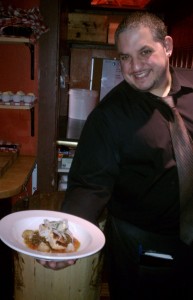 When Valencia turns out the tartiflette special, dining guests often return within the week to savor the dish for a second or third serving. Michael Vierra, who has managed the dining room at Le Bouchon for more than five years, merely mentions tartiflette, and patrons close their menus and order the magnificent mix.

“The tartiflette is a favorite,” Vierra said. “Ours is prepared with Yukon potatoes, bacon, caramelized onion, and cheese (Reblochon) from the Savoy region in the French Alps. We’ve served at least 50 this week.”

“Michael is very talented,” Graff said. “He tries to know more than me. Even the wine, I leave to Michael, and we change pretty often. Ninety-five percent of our selection is French wine, not because I don’t like California wine, but because customers can get a full range of French wines here.”

While much of the wine selection makes its way from France, Le Bouchon prepares many of the house specialties onsite. But Graff orders one of his most traditional French selections from a purveyor in California.

“The pâté we make here, but there is one item we cannot make. You need a permit to make the boudin noir (blood sausage),” Graff said. “For 10 years, I have used the same supplier in California, and it’s the best.”

Guests can choose from a selection of French wines at Brasserie Le Bouchon.

While a generous serving of boudin noir with a glass of amber beer keeps a regular clientele returning, Graff believes that customers who don’t eat pork can find a range of traditional options on his menu to include poultry, beef, fish and garden greens. Seasonal vegetables are locally grown, and Graff, who lives in Garrison, plans to increase his use of fresh local products.

“In summer, I have one farmer who does all of my tomatoes, and all of my herbs, rosemary, basil, sage, oregano, parsley,” Graff said. “The heirloom tomatoes are so beautiful. And soon enough, he’s going to do my eggs.”

Graff finds himself fortunate in establishing Le Bouchon in Cold Spring. But locating on a corner was no accident, and being in close proximity to a train stop wasn’t a coincidence either. Thanks to location, he also met his wife, Wendy, through French cuisine.

“Every day, someone was ordering the same food from me for lunch,” Graff said. “I wanted to know who this was, ordering every day. She was French-Australian, and now we’re married.” Graff also has four children living and learning the restaurant business. Two of his children work at The Garrison Café, the restaurant Graff opened on 9D in 2012. He’s keeping restaurant life in the family, an inherited tradition.