Over 180 students — highest level ever — have signed on

Those who think young children only get excited over things like parades and electronic devices would have been surprised at the wide eyes and hopped-up energy level directed at, of all things, a book swap and a visit from their school’s principal. Anticipation was high, and spirits were up there, too, last Friday, March 1, as two rooms at The Living Room filled with over 50 Haldane elementary students and became the launching pad for this year’s edition of PARP (Parents as Reading Partners), a PTA-sponsored program that encourages the special bond that forms when parent and child read together, whether or not the child is able to read on his or her own yet. 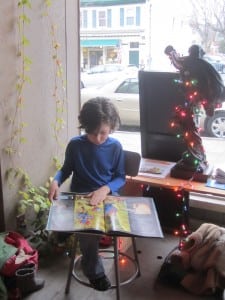 An engrossed young reader finds a good reading spot at the PARP launch. Photo by A. Rooney

The core activity of PARP is, simply, for a parent and a child to agree to having the parent read to the child for at least 15 minutes a day, five days a week, for a set period of time, this year March 1 through 22. PARP was developed in 1978 by then state Sen. James Donovan, and in 1987 the New York State PTA was asked to assume responsibility for it. It provides local PTAs with a template and a host of materials to work from, as well as possible thematic ideas, based on past efforts, though each PTA is welcome to create its own theme.

After a hiatus of three years due to funds being allocated into other activities, the Haldane PTA brought it back for 2013, choosing the theme “Heroes” in part, said PARP Chair Mary Bates, to communicate a feeling of hope and action, prompted by this community’s response to Hurricane Sandy relief efforts. Bates found a connection between heroes of literature and heroes closer to home. “We’d like the children to talk to their family about heroes within the family, get discussions going,” said Bates.

At the time of this interview, 181 children had signed up to participate — the highest level that Bates is aware of in the program’s history (which dates back until at least 2000) at the school. Sign-up forms, which include a pledge undertaken by both child and parent, were still rolling in. Included in that number were, at press time, 17 from fourth-graders and 22 from fifth-graders, dispelling the notion that PARP is for those who haven’t learned how to read on their own yet.

To encourage readers in all of the grades, Bates came up with a calendar full of grade-specific and activities, all linkable to on the PTA/PARP webpage. For instance, the third-grade page asks, “How many book titles can you find that DON’T contain the letter S?” while a first-grade activity prompt suggests, “After your parent reads you a story tell it back to him/her; try to describe many details.” It is Bates’ hope that “these tailored activities will make a difference in inspiring some dialogue between child and parent.” Each student who enrolls receives a free age-specific book and a packet of activities to go along with it.

This year they are also giving the children a reader’s poll (instead of the usual reader’s log), and asking them for a list of their favorite books of all time, as well as the favorite books they read during PARP. They will see where common themes/titles emerge and will post the results of the poll on the webpage as well as on a “Reading Tree” — a large two-dimensional tree constructed (by Bates’ husband Steve) out of Homasote built for the 2010 PARP, which had a Reading Rainforest theme. The tree will be displayed in the elementary lobby during PARP. 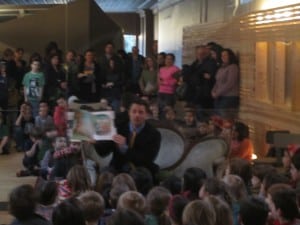 As to the notion that girls are more oriented towards sit-down activities, such as reading, while boys are all action, Bates said that they were sensitive to what might grab boys’ attention most when choosing books. Most were geared towards both genders, but for fourth grade, where there happens to be one of those every-so-often classes with a lot more boys than girls, they specifically picked an adventure story, Everest by Gordon Korman, with them in mind.

Bates also recommended a site specifically designed to address boys and reading: guysread.com, and she recommended choosing books to read together with a built-in appeal to the kind of storytelling boys often respond to, such as The Hobbit. Bates said it’s important for parents to remember that boys are usually most excited about reading when they get to choose the book themselves.

The launch of Haldane’s PARP drew a big crowd. The kids were asked to bring two books to the book swap, and, in return they would be taking one home. That give-two-get-one math made sense because, in keeping with the theme, the books collected were donated to the East Rockaway School, the school Haldane was matched with during earlier Hurricane Sandy fundraising endeavors. Children heroically consumed pizza and took part in art activities and then gathered round Haldane Elementary/Middle School Principal Brent Harrington, as he donned a pair of large green boxing gloves in honor of his favorite superhero, the Incredible Hulk, and read aloud from a story involving that very protagonist.

In addition, the PTA has invited Harrington to perform a “special heroic challenge” in response to successful reading efforts from the students. The best part of all is that the kids (and all students will get to watch this, not just the PARP participants) get to vote on what it will be. Thus far the possibilities are shrouded in mystery and won’t be revealed until partway through the program.

Garrison School also celebrated PARP. According to Theresa Orlandi, who chaired the committee there, in late October renowned children’s author Patricia Polacco visited the school (along with Haldane) to meet with students and faculty. Garrison’s PARP week theme was “Elect to Read,” timely, as it was just a short time from Election Day and students voted for their favorite Polacco books, did DEAR (Drop Everything and Read) time with their families, and had a  “breakfast and books” day, in which they wore pajamas to school and had a special breakfast for hot lunch.