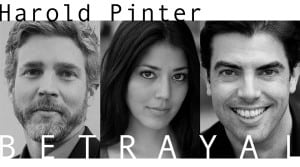 Known for his spare, oblique language and themes of emotional violence, Pinter presents the story of a seven-year affair involving book publisher Robert and his wife Emma, and Robert’s best friend Jerry, a literary agent who is also married. Jerry and Emma start an affair in 1968, and later, in 1973 during a summer vacation, Robert learns about it. By 1977 the lovers have parted but not without destructive results to everyone involved.

An extramarital affair among the British posh set might seem like familiar melodramatic territory. What makes Betrayal distinct is that Pinter upends things by innovatively presenting the key events in reverse chronology, putting the audience off balance by what is expected as an “ending.” What we come away with are various suspended moments of betrayal by all three characters, at times claustrophobic, sadistic and sensual as they seduce and wound each other with what they say … and don’t say.

The performance starts at 7:30 p.m. on March 16 and is free to the public. Due to limited seating, early arrival is encouraged. Seating is on a first-come, first-served basis. For more information about World’s End Theater, visit their website at worldsendtheater.org