A group of eight peace walkers on the Peace Pilgrimage for a Nuclear-Free Future arrived in Cold Spring around 4 p.m. on Wednesday, March 6, chanting and banging drums to raise awareness of the dangers of nuclear energy and weaponry and calling for “No more Fukushimas.” They stayed overnight at St. Mary’s Episcopal Church and were welcomed with a potluck dinner attended by over 20 guests from Philipstown, Putnam Valley and Beacon. 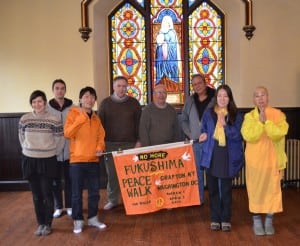 The walkers began their pilgrimage on Friday, March 1, from the Grafton Peace Pagoda in Grafton, N.Y. The leader of the walk is Buddhist nun Jun Yasuda (known as Jun-san), of the Nipponzan Myohoji order and veteran of several peace walks. The walk is a response to the disaster caused by meltdowns and explosions at the Fukushima Daiichi Nuclear Power Plant following the 9.0-magnitude earthquake that struck Japan on March 11, 2011. Two years after the quake, radiation levels are still high, and Japan continues to struggle with the health effects and cleanup.

After arriving in Cold Spring, Yasuda told Philipstown.info that the peace walks allow them to meet all sorts of people and get the message across that their purpose is indeed serious, especially when they walk in the rain and cold. Many people they encounter on the road in those conditions show concern for the walkers and offer to bring them food, and in the process they learn about the mission of the walk, which Yasuda said most people don’t want to hear about.

“This planet does not belong to anybody,” Yasuda said. “It’s not just some countries’ issues. It’s about taking care of this planet for the next generation. We should use the good side of ourselves to help each other, take care of each other.”

The dinner began with an introduction of the walkers and all guests in attendance, followed by a blessing by Larry Bringing Good, of Troy, N.Y., a Native American of Cheyenne and Arapaho descent. After eating, the walkers talked about their experiences on the peace walk and the situation of all living near nuclear power plants, such as Indian Point Energy Center, just 15 miles south of Cold Spring, and the possibility of a disaster similar to Fukushima’s. Indian Point is situated at the convergence of two fault lines, and with the large metropolis of New York City 25 miles to its south and no evacuation plans feasible in the case of a large release of radioactivity, such an event would be even more disastrous than at Fukushima. 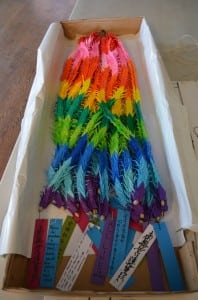 Paper cranes with messages of peace made by the peace walkers, to be presented to President Barack Obama in Washington (Photo by J. Tao)

At the end of the program, Cold Spring’s Roberto Muller, of the Indian Point Convergence, and some of his friends from Cold Spring and Beacon performed and sang for the peace walkers.

After resting for a day at the home of a friend in Kent, the walkers had planned to walk on Friday, March 8, from Cold Spring to Peekskill. Because of the snowstorm, however, conditions on Route 9 were too dangerous for the walk.

They continued the walk on Saturday, March 9, where they joined the Walk for the People, Walk for the Earth, which originated at the New England Peace Pagoda in Leverett, Mass. At noon, they attended a press conference at the Croton-Harmon train station, where two former Navy navigators, Maurice Enis and Jamie Plym, told of their irradiation and the health problems they are experiencing as a result. Afterwards, they walked to Indian Point to hold a vigil.

On Sunday, March 10, the walkers and Plym and Enis participated in “Fukushima Fallout,” a presentation about the dangers of nuclear energy and particularly at Indian Point, held at the Stony Point Conference Center in Stony Point, N.Y. The program was followed by a potluck dinner and a showing of Cold Shutdown, a 32-minute documentary by Hunter College Professor Martin Lucas, which he shot in Fukushima last year.

Both walks will culminate in Washington, D.C., on April 5. For more information, including a complete schedule of the walk, visit newenglandpeacepagoda.org.